Skin cancer at 21: What tanning can do to your skin

Kate Neale was young, pretty and poised to take on the world — until her tanning obsession led to a melanoma diagnosis at age 21. Now she's trying to save other women from a similar fate. 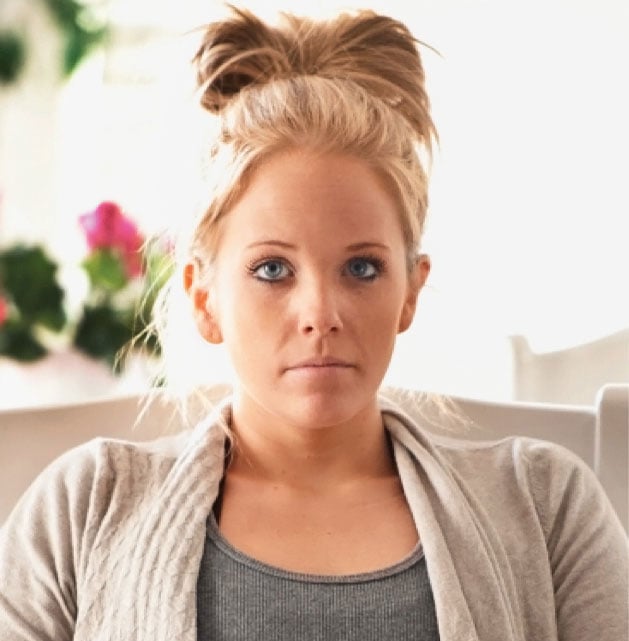 In the summer of 2008, Kate Neale graduated from high school in Belleville, Ont., and snagged one of the most coveted jobs among her friends: manning the desk at the local tanning salon. “It felt very glamorous,” she says. “All of the pretty girls worked there — it was the place to be.” The salon was always fully booked.

Like many of her friends, Kate idolized reality star Paris Hilton and coveted her sun-kissed look. She’d dyed her long red hair blond and had been going to the salon for tanning sessions a few times a week for two years. Her parents didn’t approve (her mom is a nurse), so she’d hitch rides with friends and their parents.

The first time Kate went to the salon, she was advised to start at seven minutes. Knowing she’d burn easily, she requested five (the lowest amount) instead — and still went home with a burn. Briefly, she considered not going back, but trips to the salon had become a social activity among her friends, and it wasn’t long before she returned for another session. “I got used to it. Then I started going at least three times a week — it was addictive. I’d go whenever I could.”

In June 2008, the month of her prom, Kate went for 18 sessions for up to 18 minutes at a time in the salon’s highest-powered machine (there’s a warning on the machine recommending a 12-minute maximum). 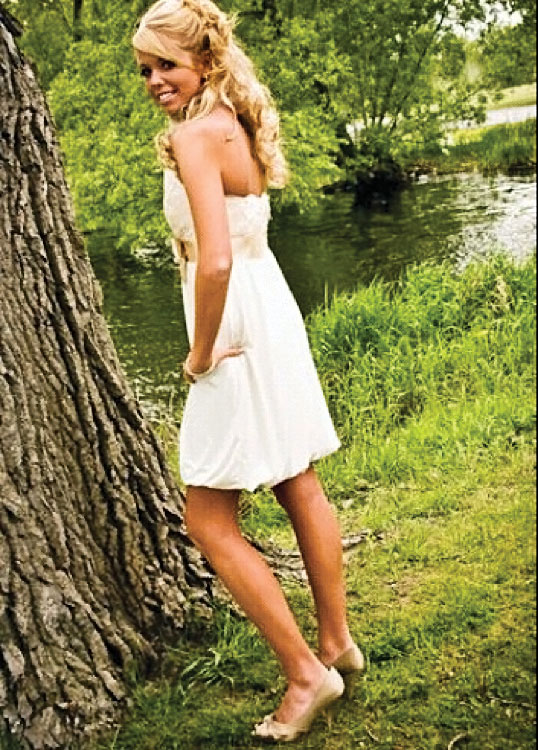 A tanned Kate before her diagnosis.

When Kate was hired by the salon, she got 12 free sessions a month. She also agreed to maintain her tan. Soon, Kate was basking under the blue-tinted lamps almost every day. “My skin wasn’t burning anymore, and I’d been taught about all the ‘healthy’ benefits of tanning through the salon,” she says.

Three years later, Kate’s mom noticed a mole near her daughter’s belly button. It stood out on her skin and was darker than her freckles. Kate had noticed the mark a few months earlier but ignored it. Her mom pressured her to see a dermatologist, but Kate refused. “I didn’t believe anything was wrong. I insisted that I was trained, I was certified by Smart Tan [a company that certifies salon workers as being knowledgeable about the benefits of tanning] and I knew what I was doing.”

Still, Kate did a Google search and discovered that the fact the mole was peeling and itchy wasn’t good. “That scared me, but I told myself I was fine and was just being paranoid,” she says. Her aunt knew someone at a dermatologist’s practice and got her an appointment about two months later.

In the exam room, the dermatologist told Kate that although the spot didn’t look suspicious, they would still do a “punch” biopsy, a procedure where part of the spot would be removed and then sent to a lab for analysis. Kate received a stitch after the procedure and thought the ordeal was over — until two weeks later, when she received a phone call from her dermatologist’s office. The mole was cancerous. At 21, Kate had melanoma. 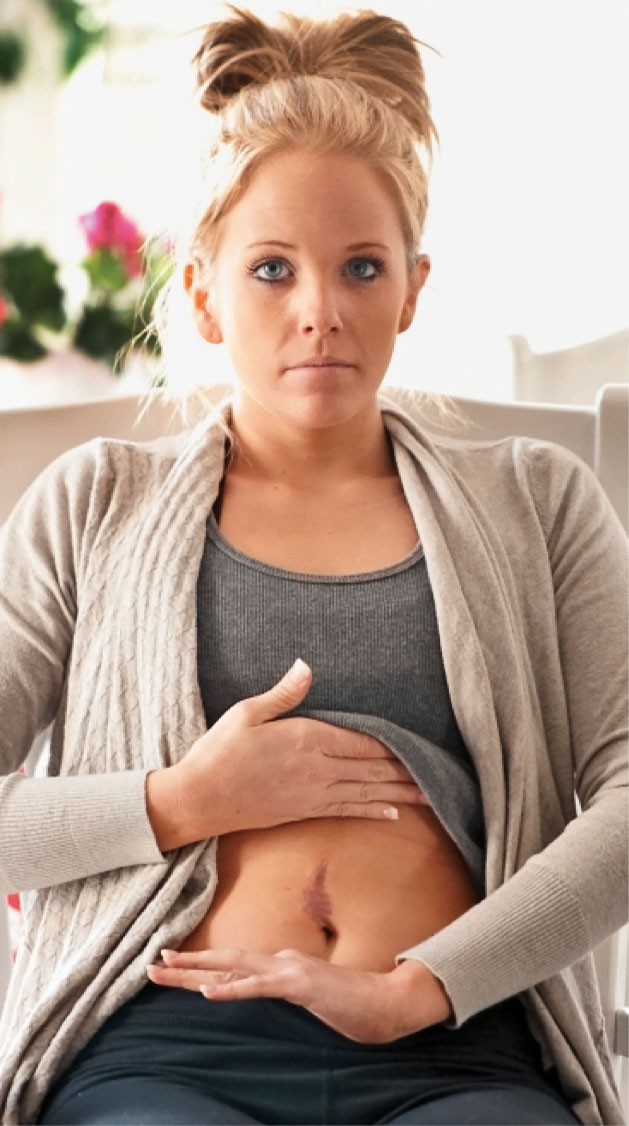 Kate shows the scar left behind after her melanoma was removed; Courtesy of Sherry Tompkins, The Pioneer

There are three main types of skin cancer, each one named for the cells found in the skin: basal-cell, squamous-cell and melanoma. Sun exposure generates free radicals in your body, which can damage your DNA, and if that happens, certain types of cells can become abnormal and grow rapidly, forming skin cancer. Melanoma is caused by the mutation and proliferation of melanocytes (cells that produce melanin, which gives skin its colour). The cells cluster together, developing cancer that can appear in the form of moles or dark spots. It is the most dangerous type of skin cancer because it can spread quickly to the bloodstream and other organs, causing death.

Although one in 90 Canadian women will develop melanoma in their lifetime, many still believe that getting “a little colour” looks attractive and (perhaps the biggest myth of all) is healthy. And tanning salons are only too happy to perpetuate these myths. In addition to free tanning sessions, Kate was given seminars “educating” her on the benefits of tanning. She says she was also made the official “D-Angel.” Steve Gilroy, vice president of Smart Tan, says the D-Angels at tanning salons are responsible for teaching clients about how indoor tanning can increase their vitamin D levels. “We have a range of certification programs that start with the basic UV tanning certification all the way up to a master’s program,” says Gilroy. (On its website, Smart Tan describes D-Angel certification as “a movement that will inspire your employees to speak out against the lies and deception of Sun Scare.”)

“If I ever got a feeling that tanning might be unhealthy, I just told myself, ‘Well, I don’t smoke, I don’t do drugs, I don’t drink, so I can tan.’” But what Kate didn’t know is that while UV exposure of any kind is dangerous, some tanning beds emit ultraviolet radiation at levels that are five times stronger than those of the midday summer sun.

Skin cancer is on the rise: Women today are eight times more likely to develop melanoma than women in the ’70s. Researchers believe the increase may be the result of more women turning to tanning beds. “The damage from UV rays typically takes 20 to 30 years to show up on the surface of our skin, so people often get a false sense of security,” says Dr. Vincent Ho, professor of dermatology at the University of British Columbia. And the risk of developing skin cancer is cumulative, which means every time you bathe in the sun or lie in a tanning bed, you’re adding to your risk. “If you’ve been regularly tanning for 10 or 20 years, your skin will eventually reach a threshold, and any abnormal cells will begin to grow uncontrollably,” Ho says. “Suddenly, you’ve developed skin cancer.”

Kate was diagnosed with Clark’s Level 2 melanoma, which meant the cancer was in the top layers of her skin and not as deep as levels 3 to 5. Within weeks of her diagnosis, she was at a plastic surgeon’s office for a more invasive treatment called a wide excision, in which a doctor removed the spot from her stomach as well as six inches of tissue surrounding the freckle. She needed 14 stitches to close the wound. Kate waited, scared and anxious, for two weeks until the lab results came back: The melanoma had not spread to her blood, and the surgeon had been able to remove all of the cancer. Still, the diagnosis changed Kate’s life forever. Last year alone, she averaged two doctor’s appointments a week, getting her skin checked from head to toe and having an additional 12 biopsies for moles and freckles on her face, breasts, legs, armpits, arms and the sides of her torso (thankfully, they were all noncancerous). “It’s exhausting, not to mention painful, to have all these biopsies,” Kate says. “But it’s a matter of life and death.”

Having had melanoma once, and because of repeated and prolonged UV exposure from tanning, Kate has a high chance of the disease recurring. “I have to keep an eye on my body. My oncologist told me I’ve done a lot of damage to my skin, and because I have so many spots, they could change at any time. I look at my freckles daily and take photos of them.” The worst part of it all, Kate says, is the anxiety. “There was a spot on my back recently that was itchy for a while, so I had it removed.”

Reflecting on her original diagnosis, Kate says she isn’t angry at the salon, she’s angry at the whole tanning industry. “I felt betrayed. And I had encouraged so many other people to tan.” For a few months after her diagnosis and surgeries, Kate felt sorry for herself. Then she decided to do something about it. “I thought, ‘Feeling bad isn’t going to do anything for me. There are a lot of people, a lot of my friends, who tan. My story needs to get out there.’”

Kate has made it her mission to educate young people about the risks of tanning. Just over a year ago, she became a volunteer for the Canadian Cancer Society, and recently she joined forces with New Democratic Party MPP France Gélinas to lobby for a bill that would raise the legal age for tanning bed use from 16 to 18 in Ontario, following the examples of Quebec, Nova Scotia and British Columbia. Last summer, Kate toured schools across Ontario, telling students about the risks of tanning and pleading with them to go tan-free for prom. “I hope tanning beds are banned in Canada in my lifetime. But it has to happen in baby steps, like the laws around smoking — unfortunately we can’t just ban it all at once,” she says.

Her efforts have already paid off. In Oakville and Belleville, Ont., bylaws were recently passed prohibiting anyone under the age of 18 from using tanning beds. “In Belleville, I had 50 doctors sign letters supporting the bylaw and I didn’t have to convince anyone; it’s a no-brainer.” At one school in Toronto last year, Kate forgot her presentation and was sure none of the students were paying attention to her speech. “I thought it was awful. But that was where I had the most people come up to me right after to thank me and sign a tan-free pledge.” This summer, Kate is continuing to speak at schools, advocating for tan-free proms. “It’s challenging to get through, because I know that when I was a teenager, I might not have listened,” she says. “But I’m honest with them — I show them my scars, and I don’t sugar-coat anything, and that makes them listen. Even if one person stops tanning and it saves their life, I’m happy with that.”

If you’re worried about a spot, get it checked out.

Here are some signs to watch for:

1. Discoloured or misshapen moles or freckles.

2. Any birthmark or mole that changes in shape, colour, size or surface.

4. Any sore that doesn’t heal.

5. Any patch of skin that bleeds, oozes, swells, itches or becomes red and bumpy.

If you’re nervous about your tanning past, there may be ways to undo some of the damage:

Creams: A dermatologist may prescribe cream (such as Efudex) if you have pre-cancers (changes to the skin that may become cancerous over time).

Aspirin: A new Stanford University study found taking Aspirin may reduce the risk of melanoma. (Solish recommends taking it after a burn to relieve inflammation.) 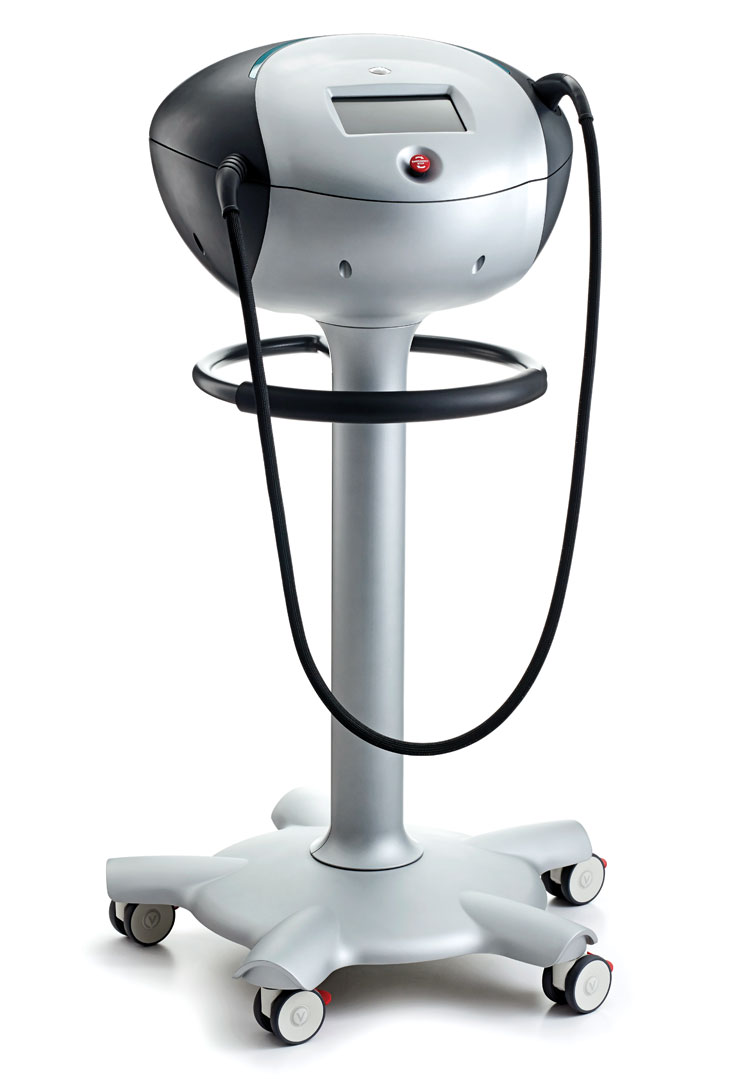 The future is light

The Aura: Chatelaine recently reported on a new breakthrough in the world of skin cancer. Developed by scientists in Vancouver, the Verisante Aura is a detection tool that uses a special light ray that can check up to 40 skin lesions (moles and freckles) for cancer risk in only 15 to 20 minutes. Researchers at the University of British Columbia found it accurately detects cancer 99 percent of the time and could reduce unnecessary biopsies by 50 to 100 percent.

Have you had any experience with skin cancer? Tell us how you dealt in the comment section below.