Pelvic floor dysfunction: It's more common than you think

Less than confident that your bladder will hold every time you jump, laugh or run? Find out how to fix this common -- and not frequently discussed -- issue. 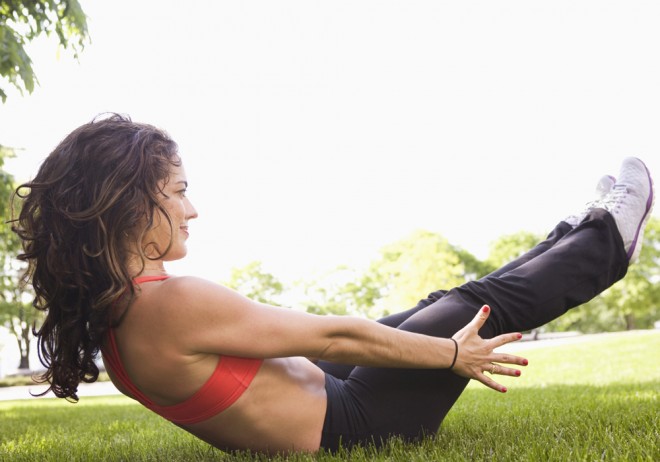 Is your pelvic floor disrupted?/Photo by Getty Images

When people think of their pelvic floor, they typically think of their more private parts. What they don’t realize is that the pelvic floor works to support the bladder, intestines and (for women) the uterus. It helps women during labour and is used by both men and women every time we use the washroom.

As little as people know about their pelvic floor, they usually know even less about pelvic floor dysfunction (PFD). When continence issues start to surface — whether due to age, or after child birth — we often chalk it up to ‘one of those things’ until it starts to affect our quality of life — and then we want a fix.

There’s a limited view that when people refer to PFD, it refers only to the bladder (it doesn’t) and only happens when you jump, cough or sneeze. This comes from a culture that keeps the topic pretty taboo.

Kudos to Whoopi Goldberg and Poise for adding some humour to the subject. Awareness about the pelvic floor, the muscles and it’s proper function is the first step in taking the blind folds off and getting people to, not only address their symptoms, but feel better about themselves. Here’s five things you should know about the pelvic floor:

1. Almost 30 percent of women who deliver babies vaginally are incontinent
Once you hit the age of 30 this percentage increases to 33 percent and continues to grow with every birth afterwards. Although it’s understood and accepted by most mothers, it is treatable.

2. Your pelvic floor does more than you think
It’s a sling of muscles that starts from the front of your pubic bone and goes underneath to attach to the bottom of your spine so it supports more than your bladder, rectum and uterus. It has a big job of supporting your pelvis and spine too! Knowing this, when professionals talk about PFD, it can also present as a pelvic organ prolapse (POP), back pain and hip pain.

3. Men, teens and athletes can suffer from PFD
We’re so used to women, moms and seniors suffering from incontinence, that we forget a whole other demographic. PFD is not caused by pregnancy and aging alone — stress, surgery, injury, obesity, and menopause can also be contributing factors. Research shows that men suffer from incontinence mostly because of a swollen prostate or after prostate surgery. Diabetes, nerve damage, infections and medications can also attribute to a weak pelvic floor in both men and women.

Teens and athletes are another group that are widely overlooked. Ever wonder how much stress a pelvic floor can take after hours of gymnastics or running every week? When you come down from a jump or run, all the shock goes into your joints as well as the muscles and connective tissue of your pelvic floor.

The latest statistics show that approximately 40 percent of female elite athletes suffer from SUI (stress urinary incontinence) and a 1999 study found almost 30 percent of female college athletes in the U.S. suffered from at least one episode while performing their sport — with high-impact sports seeing more complaints.

4. Your pelvic floor muscles (PFM) are like every other muscle in your body
Because these are muscles, they need to be strengthened and supported properly or they’ll begin to atrophy. Your PFM is the base of your core and is anticipatory in nature. It needs to contract nano-seconds before movement for proper support. Constant pressure, without training the muscle to support the extra load, can eventually lead to weakness and loss of continence.

5. Many PFM surgeries fail within five years
If you’re going the surgical route, make sure you’re prepared to do it more than once. Some people, in more serious cases, require surgery and the stronger you are going in will improve your recovery and strength afterwards. To avoid surgery and other issues, it’s best to make pelvic floor training and exercises, like kegels and Pilates, part of your regular exercise routine. If there’s a problem you can’t seem to control speak with a pelvic floor physiotherapist. In the name of your comfort and health it never hurts to be proactive about your pelvic floor.

Samantha Montpetit-Huynh is the mother of two and an expert in pre and postnatal core strength as well as pelvic floor health. She’s the founder of Core Expectations, Toronto’s only full service wellness team that delivers personal training, abdominal rehabilitation and other support services to the homes of pregnant women and new moms across the GTA.