How to achieve your goals! We've consulted the experts and found out what truly works 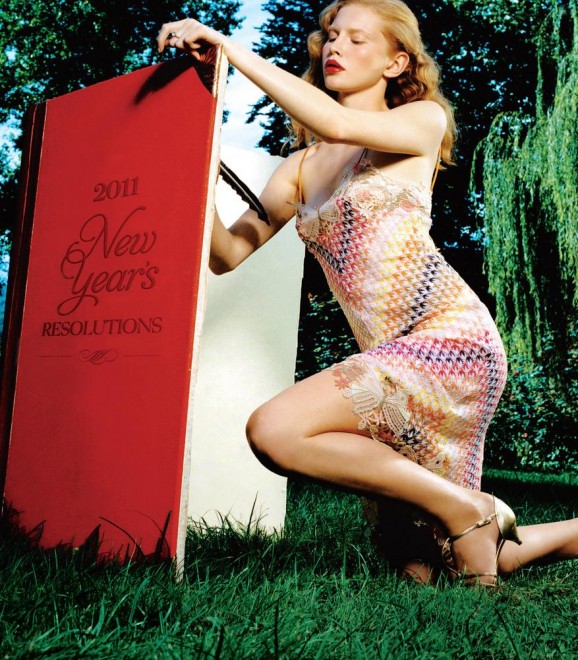 This past summer, Céline Doré found herself on a long-awaited holiday in Paris with her husband. As they took a late-night boat tour down the Seine, gazing at the city, which was lit up magically, and at the Parisians eating, drinking and dancing along the riverbank, Céline felt an emotion that she’d come to experience many times that year: satisfaction. “I was just so proud of myself. I’d been talking about going to Europe for so long, and there I was. I’d done it,” says the 31-year-old technology consultant from her Toronto home.

Céline’s European adventure was one of three New Year’s resolutions she’d made last January. The other two? Run a marathon and get out of debt. Amazingly, by mid-year she was able to cross them off her list too. Within five months, she’d pounded pavement at the Mississauga, Ont., marathon and paid off wedding bills and expensive home-reno tabs, and even some old school loans . Not exactly chump change. And not exactly easy, either. Not only was she running for hours on snow-covered streets in the cold, but Céline also put her household on a strict financial budget.

Still, Céline says her resolutions would have been nearly impossible to keep if it hadn’t been for a New Year’s goal-setting group she’d formed with two of her best friends in January. Once a month, the three women would meet for dinner, discuss their recent accomplishments and brainstorm ways to sidestep failure. And everyone got a kick in the pants when they needed it. “I got slack about budgeting after a while, but my group put things in perspective and said, ‘This year is the year you wanted to finish it,’” Céline says of her debt-reduction goal. “They helped me remember what was important.”

It’s hearing success stories like Céline’s that makes so many of us—nearly 50 percent, according to some sources—make New Year’s resolutions each year. Writing down goals, we hope, fingers crossed, will make us skinnier, more organized or smug non-smokers. Even in the face of downright depressing statistics—one oft-quoted study showed that 22 percent of resolvers fail after only one week and 81 percent are back to their old ways within two years—we try and try again. Yet that’s not necessarily a bad thing, says Richard Koestner, a professor at McGill University in Montreal who specializes in motivation and goal setting. He sets a few New Year’s resolutions himself each January—and cops to the fact that most of them aren’t met. The point, he says, is that if we try often enough and learn from our mistakes, someday we’ll be crossing that proverbial marathon finish line, too.“The research suggests it can take seven or eight attempts before someone succeeds at their goal, so it’s common for people to make the same resolution year after year,” he says.

That’s right: seven or eight times. As in seven or eight years of wheeling out the same old popular resolutions like losing weight, exercising or changing jobs. No wonder many of us throw in the towel so soon. Forget the mythical 21 days people talk about when discussing how long it takes to form new habits. A paper recently published in the European Journal of Social Psychology busted that myth when it revealed results from a preliminary study showing it took between 18 and 254 days before an action became automatic. The average was 66 days.

So should we even bother making resolutions? Absolutely, says Koestner, who ditched his two-hour-a-day TV-viewing habit, makes his lunches and drinks plenty of water. All are changes from resolutions made over the years. Success is just a matter of understanding what it actually takes to break (or make) a habit—and knowing the right ways to go about the task.

Set achievable goals. Research tells us that resolution makers often fail because of unrealistic expectations. We want results tomorrow, and they’ve got to be big. We expect the process to be easy and our lives to change dramatically if we actually meet our goals. Although our society supports the idea of transformative, yet easy-peasy, sudden metamorphosis, that’s not how self-change actually works, says Edward Phillips, director of the Institute of Lifestyle Medicine at Harvard Medical School in Boston. “People are looking for something that is too quick. If you told your girlfriend that you wanted to grow your hair long, you wouldn’t expect it to happen overnight, and you’d be okay with that because that’s the way change happens,” he says. Remember to be patient—and realize that your goal is going to be hard work.

Choose something that you believe in. Ann Male, a 46-year-old mom of two from Port Credit, Ont., knows all about making resolutions that go nowhere. Before she became a busy mother, she made the typical weight-loss and money-saving resolutions. None of them stuck longer than a couple of months, though, and after a while she just gave up. “I think it’s good to have goals and keep refreshing your life, but when it starts to put negative pressure on you, that’s not very healthy,” she says now. Once her kids got older, Ann decided to give resolutions a go again, but this time she’d start them in September and choose only goals that would feed her soul. She took art classes and is now jotting down short stories in a creative-writing group. In short, she’s setting herself up for fun, not failure. It’s little wonder that Ann’s new resolutions are working for her, says Koestner. Many of us choose New Year’s resolutions to address our guilt or to meet other people’s expectations. “But if you select a goal that’s really connected to who you truly are—your interests and important personal values—you’re much more likely to succeed,” he says. Before making any kind of resolution, take some time to think about what you really want out of life. Is it smaller thighs, or lasting friendships? Only you can decide what actually makes you happy.

Put your plan on autopilot. Here’s another reason Ann’s resolutions are working: She’s found ways to make sticking to her pledges easy, says Koestner. By attending classes, she doesn’t have to remind herself to dig out a pen and paper or her watercolour set. “Once you decide on your goal, you have to work on a simple plan to make it easier for you,” he says. Koestner refers to a woman who found a way to stay fit all year: She set her gym gear by the door each night so she could just grab it and go in the morning. Meanwhile, a hard-core computer-agenda user blocked off two hours every few days to hit the treadmill. She made those appointments because she already considered her agenda sacred. Plans are incredibly important, simply because all of us need help in the willpower department, he maintains. In short, we have little self-control. After we’ve spent a whole day keeping it together in front of our colleagues and in line at the grocery store, our levels of self-control become depleted. We wake up at 7 a.m. feeling as if we can conquer the world, but pushing ourselves to refrain from raiding the refrigerator after the kids go to bed? Forget it. The resolve is long gone. But here’s the good news: An implementation plan can help you find ways to face the fridge most nights of the week, with little willpower required.

Try the buddy system. Sometimes all it takes is a good pal to keep us motivated. That’s what Katrina Carroll- Foster, 37, from Vancouver discovered when she made the resolution to start her own business with her best friend, Tracey Solomon, 39, in New York. For years they’d been talking about ditching their marketing jobs and joining entrepreneurial forces, and finally the time felt right. In less than a year, they’ve quit their jobs, built a business plan and incorporated the business. Now they are in serious talks with investors and are about to launch their online women’s-apparel shopping site, Hoseanna. They needed each other to stay focused on all the little tasks. “I’ve learned that simply talking about a goal or writing it down is really hollow,” Katrina says. “You need someone to hold you accountable.”

Getting support works better for women than for men, according to a U.K. study. Men succeed at meeting goals when they break them down into bite-sized pieces. Women do better when they tell other people about their resolutions or are encouraged not to give up.

After nailing three New Year’s resolutions in one year with the help of her goal-setting group, Céline is not at all surprised that teamwork helps. “When you have other people rooting for you, you start to think, ‘Oh, they believe in me—maybe I should too,’” she says. It’s time you believed in yourself too. So this year grab some friends, dream up a couple of heartfelt resolutions and build yourself a plan. Achievement is all about taking small steps to reach big goals. And if after all that guidance your New Year’s resolutions still flop? Chin up! There’s always next year.

Start your own New Year’s resolutions group with these six tips!

1. Grab friends who are committed to the cause. Keep the group small so scheduling conflicts don’t pop up.

2. Set aside a couple of hours every month to meet. To keep it simple and virtually automatic, choose the same day and time.

3. Come up with two or three resolutions each and write them down.

4. Brainstorm small steps and stages to meet your bigger goals.

5. At meetings, discuss your recent successes and the times your plans fell apart. Brainstorm ways to overcome obstacles next time.

6. Don’t accidentally weaken your friends’ resolve. Have a pal trying to save money? Make meetings a BYOB and potluck affair. Best friend trying to shed her tummy rolls in 2011? Serve low-cal drinks and nibblies, or have walking meetings.

For more resolutions tips, check out this article.