Would you rock a mullet to improve the health of your family?

One young couple was tired of their children's reluctance to play outside, so they did what any parent would do — start living like it's 1986. 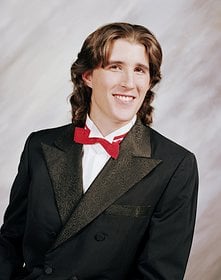 Mullet haircut, similar to the one Blair McMillan sports in the spirit of 1986. (Photo by Getty Images)

Technology is supposed to improve our lives — to free us up from things like doing the dishes by hand, or beating our dirty laundry against a rock. Thanks to the invention of dishwashers and washing machines we can indulge in more productive and rewarding activities such as watching The Real Housewives of New Jersey.

But technological advances come with their own complications. I love my dishwasher, but I have a more strained relationship with my smartphone. It allows me to be in constant communication with friends and family and to online shop when I’m stuck waiting at the doctor’s office. But it has also invaded my private life and my psyche in a way that my pricey blender could never do. I compulsively check my email when I’m out with friends and family and find myself answering a work email at midnight on Sunday, or even worse — sending a work email out at midnight on Sunday.

These behaviours can’t be good. They’re a symptom of a 24/7, overstimulated state of mind.

Constant communication and constant stimulation — I can barely keep up with my PVR recordings — can become easily overwhelming. As a result, I fantasize about tossing my cell phone and laptop and taking a technological sabbatical. But could I actually go through with it?

The McMillan family of Guelph, ON, (via The Huffington Post) is doing just that. They’ve decided to turf their cell phones/smartphones as well as their computers and Internet connection and purge their lives of any technology/modern conveniences created after 1986.

Why 1986? ParentDish.ca reports that it is the year that both parents were born. The McMillans have given up iTunes and cordless phones and instead are using a rotary phone, a ghetto blaster and audio cassettes, among other 80s domestic staples. They are also sending handwritten letters and meeting friends for face-to-face visits rather than texting, tweeting or using social media.

They plan on living this way for the next year.

The reason for their enforced time travel: the health of their children. In an interview with the Guelph Mercury, Blair McMillan said he was disheartened by his kids’ reluctance to play outside and their preference for playing on their iPad instead.

The McMillans are definitely creative — if not a bit kooky — but I don’t think it’s necessary to tackle modernity in quite such an extreme fashion. Rather than look backwards for a model on how to navigate the way we live now, it’s wiser to attempt to tackle the problems technology poses for us in the present. For me, that means putting my phone away when I’m out to dinner with friends and turning it off all together after 9 p.m.

It isn’t going to be easy to do these things. But unlike turning back the hands of time, it’s entirely possible. Also, it doesn’t require a mullet.

Do you think this couple is smart to ban all technology? Or is this a bit extreme for their kids? Tell us in the comment section below.