Live and learn Fay Weldon: Being bold in your 70s

Author Fay Weldon's offers her wisdom on marriage, mothers and not playing it safe 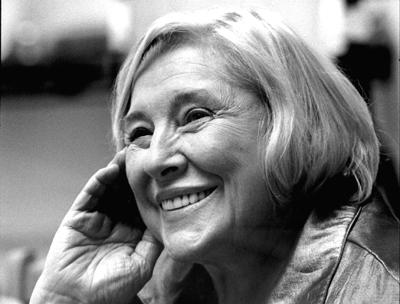 I had a baby “out of wedlock” when I was 22, married at 26, then at 33, and again at 63. It has not exactly been a steady life, maritally speaking, but I don’t regret any of it. All experience is valuable — and I am a writer. Though I do wish, looking back, I’d learnt earlier that men have emotions, too. I was brought up in an all-female family and went to all-girls schools, so I grew up thinking men were strange, alien, exotic creatures without feelings. I must, when young, have been a monster. At the same time, to be married and sleep with a man in the same bed seemed a great luxury, and one I always sought. Put it down to my generation and my upbringing.

But you live, you learn, you do come to conclusions. And if I were to offer advice to the daughter I never had — I have four sons — it would be along these lines: Since the things you regret most are the things you didn’t do, not the things you did, be bold. Have the baby, go to the Galapagos, get your boobs enhanced, sleep with your boss, move in with the postman — whatever. Don’t spend an old age moaning, “If only I had.” The less you play safe, the richer your life — and for all you know, the postman will win the lottery anyway. There’s never any knowing what’s going to happen next.

Be bold, be bold, as the fairy tale says, but not too bold. Get as much sex as you decently can. It’s good for you. But look after your reputation. People do notice. When you’re young and in love and in the car park with your best friend’s boyfriend, you think you are invisible. You’re not.

If you are going to marry, do it for love, not money. Don’t move in with someone just to share the rent and the bills or, like as not, you’ll end up hurt, alone, without a roof and pregnant, while he runs off with the computer. Nobody’s rational, let alone you. And always remember, babies need fathers. If you don’t provide one, the babies grow up to complain. Children complain anyway, but give them as little cause as you can.

Try not to marry someone from work. They’ll be too like you, and one of you will get the promotion and one of you won’t. Then there’ll be trouble. Conventional wisdom suggests you should marry someone as like yourself as possible, but if you do, you’ll only get bored and want a change. Nature suggests you go for your opposite, seeking, as it does, the optimum shuffling of the genes. Let nature have its way: The babies are better.

Of course you don’t have to get married or have babies, but when women get to their 50s and 60s, they tend to wish they had. They go into “if only” mode, regret the men they turned away, the babies they didn’t have, in their 20s. So don’t be too picky, too prudent. And if it all goes wrong, you still have your friends. Cultivate them and cherish them.

Warning: Try to end up on good terms with your mother. She did the best she could for you. She loved you dearly when you were born. If she dies when you’re still quarrelling, you’ll have a real problem with remorse.

I took no more notice of my mother’s advice than you’ll accept from me. So let me leave you with this one understanding: that if you put a single dark garment in with the white wash, everything comes out grey. That’s always true.

Fay Weldon, 79, is a novelist whose new book, Kehua!, is published by Corvus.