A new way to think about buying vitamins

Koge Vitamins was started by two young and savvy business school grads who are selling customized vitamin packages at a lower cost than retail vitamins. And they're donating to children suffering malnutrition.

It was on a three-month backpacking trip to Europe, in the summer of 2011, when Andrew Lenjosek and Alex Hyssen discovered the town of Koge, Denmark. While the picturesque site offered the kind of charm many European towns do — think cobblestone streets and café-filled squares — Koge was memorable to Lenjosek and Hyssen for another reason altogether.

“While we were there we found out Koge is being transformed into the country’s central transportation hub,” says Lenjosek. “And so its purpose is supplying the entire country with the vital resources they need to continue to thrive.”

Supplying vital resources. That concept stuck and so when it came time more than a year later to name their new company — an online vitamin distribution enterprise with a philanthropic twist — Koge matched the company’s intent: to supply people with the vital vitamin needs people rely on, as well as supplying vitamins to a much needed population.

What is Koge?
Today, Lenjosek and Hyssen — both graduates of University of Western Ontario’s Richard Ivey School of Business and former investment banker and hedge fund associate respectively — took that inspiration and applied it to the business fuelling their passion and vitality today: Koge Vitamins.

But, determined not to become simply another distribution centre online for other vitamin brands, these two have created a customizable vitamin company that delivers directly to consumers. “Instead of selling hundreds of products, we thought it made more sense to sell packages of vitamins. So if you just know that you’re interested in energy or weight management for example, we’ll put together a package of the five best vitamins in that space so you get the holistic benefits you want without having to do all the research.” 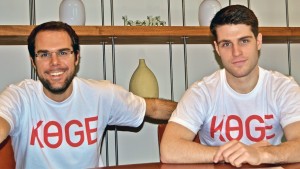 Vitamins and more
While almost 14 days into their launch, this two-employee company has already lined up some 200 customers, Lenjosek and Hyssen are hoping to reach an ambitious 10,000 customers by year-end and eventually move in the U.S. marketplace. Besides their business model — selling direct-to-consumer customized vitamin packages at a lower cost than retail vitamins, the two are counting on their philanthropic efforts to set their company apart. Namely partnering with Santa Barbara, Ca.-based Vitamin Angels, a non-profit global organization focused on improving access to nutrients for infants and children. “So for every Koge product people purchase, we donate vitamin A to children suffering from malnutrition under the age of five,” says Hyssen.

Both Hyssen and Lenjosek personally feel strong about their social responsibilities as a corporation — the two were partly inspired by the work friends of theirs do at Vitamin Angels and the high-profile charity the Clinton Foundation. “There’s very much an expectation in the younger generation for companies to be socially responsible,” says Lenjosek. “Today, this idea of being a corporate fat cat and being out there to make a buck turns a lot of people off.”

Hence it’s namesake, the city which provides vitality to an entire nation. “We very much saw Koge as being symbolic for what we’re too are trying to do,” says Lenjosek.