How to make sleep a family priority

Parents should set a good example by creating a routine to power down for a good night's rest. 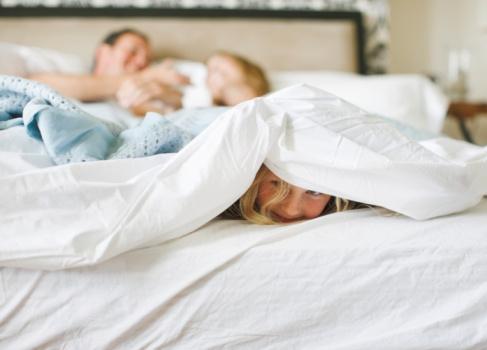 Research suggests that to function well adults need at least seven hours of sleep a night (via CTV.ca). In particular, middle-aged women seem to benefit from getting seven hours of pillow time, says a new study by researchers at Brigham Young University. The study concluded this amount of rest might help stave off cognitive decline long-term.

It’s not just adults that need sufficient rest to thrive. Kids are equally vulnerable to the health threats that arise when operating on a sleep deficit. The good news, however, is that when parents make sleep a family priority everyone benefits.

A U.S. survey of families with small children conducted by the National Sleep Foundation found that many kids aren’t getting the sleep they need. For example, the parents polled said that children ages six to 10 got eight to nine hours of sleep per night, which falls short of the 11 hours experts say is appropriate. And kids 11 to 17 years old should be getting between eight and a half to nine and a half hours of sleep each night, according to the survey.

But the National Sleep Foundation also concluded that this situation turns around when parents establish firm sleep guidelines, limit technology and set a good sleep example themselves.

Some tips gleaned from the survey include ensuring kids don’t have access to electronic devices in their bedrooms — or at the very least these devices are turned off at bedtime. This no-tech rule surrounding bedtime also applies to parents who can set a good example by observing the same approach to powering down at night. There may also be some benefit to curbing extracurricular activities or ensuring homework doesn’t interfere with rest time.

Parents that keep firm and appropriate bedtimes for kids may have to cope with an earful when the clock strikes bedtime, but in the end they’re rewarded with well-rested kids.

10 things that rob you of your sleep

Six supplements to help you get a good night’s sleep

Seven surprising consequences of a lack of sleep