Are you drinking too much? Four quick ways to find out

We go to the gym, eat our greens and aim for eight hours of sleep at night. But break out the bubbly, and we slip from sipping to chugging. Is excessive drinking our last healthy blind spot? 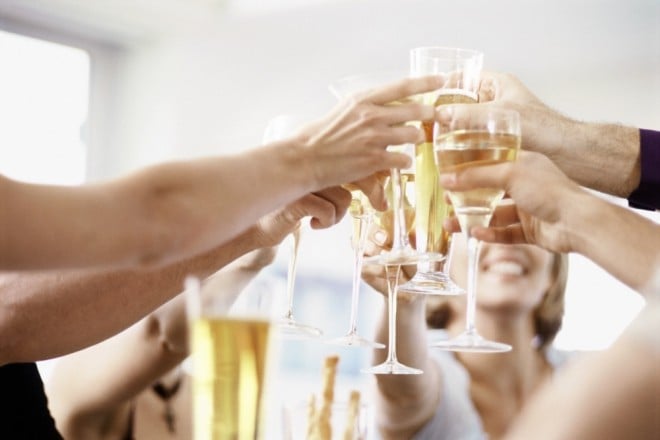 Laura Turnbull hits her health club for an hour-long après-work workout almost every weeknight. The 37-year-old watches what she eats (“I try to avoid fast food, dishes high in fat or anything processed,” she says). She’s a health-conscious professional who laces up for annual breast-cancer 5Ks and recently ran a 10K. Yet it’s not unusual for her to knock back four to six beers while puttering about her house doing yardwork or DIY projects on a Saturday afternoon. On most weeknights, she enjoys a beer or two after dinner.

An evening hanging with her girlfriends also usually includes drinks: “I’m at least tipsy if I get together with the girls because of the social aspect. It’s very easy to end up drunk without even realizing it, since that’s also when I might have white wine or fruity cocktails,” says Laura.

Laura is among a growing number of Canadians who drink every day: more than 9 percent of adults in Ontario in 2009, up from just 5.3 percent in 2002, says a recent Centre for Addiction and Mental Health (CAMH) study. She’s also part of a smaller group who engage in what the experts call heavy episodic drinking (i.e. knocking back at least five drinks on one occasion). Countless others take advantage of what they call a ‘hall pass’ on long weekends or vacations to toss back a couple of cold ones.

The drinking danger zone
Although Laura isn’t too worried about how much she drinks — she willingly eliminates alcohol when training for a race and feels that’s good enough — many addiction experts are concerned about the trends they’re noticing: the increase in daily drinkers and the increase in average drinks per week (up to 4.6 drinks a week in 2009, from three drinks in 2002, according to the same CAMH study). There’s also the fact that popular culture is increasingly embracing funny female drunks in movies like Bridesmaids or TV shows like How I Met Your Mother.

For many women, tippling can be a welcome distraction from work and, in the case of moms, school routines. “As our downtime becomes more limited and the pressure to juggle family, work, relationships and volunteer commitments increases, so does our desire to forget it all over a bottle of malbec,” says Brandie Weikle, a Toronto mother of two and former health editor, who enjoys regular girls’ nights that include food and a glass (or two) of wine.

Experts agree that there’s nothing wrong with the occasional drink. “We drink because it makes us feel nice,” says Dr. Robert Mann, a senior scientist with CAMH in Toronto. “There are social benefits that come with drinking, and there may be health benefits, too.” The benefit most commonly associated with moderate drinking is cardiovascular, he says. “Moderate drinkers are actually less likely to have heart problems than abstainers.”

This perception of wine as a panacea for heart troubles gained traction in the last decade, but what has experts concerned now is that it tells only half the story. Yes, a little alcohol can help maintain heart health, but a lot (as in regular binge-drinking episodes) can do the opposite and cause heart disease. Recent research shows we may be using perceived cardio benefits as licence to overindulge — with consequences that can be far more dire than just a bad hangover. According to a report from the World Health Organization, alcohol consumption is the world’s third-biggest risk factor for disease and disability; it’s linked to almost 4 percent of deaths worldwide.

The cancer connection
“Drinking any type of alcohol — beer, wine or spirits — could raise your risk of developing cancers of the mouth, pharynx, larynx, esophagus, liver, colon, rectum and breast,” says Heather Chappell, director of cancer-control policy at the Canadian Cancer Society. “It may also be associated with cancer of the pancreas.”

Although this information has been floating about since the 1990s, when the International Agency for Research on Cancer classified alcohol as a carcinogen, awareness of the booze-cancer link is still minimal. “I don’t think illnesses like cancer come to mind when we think about alcohol,” says Weikle. “After alcoholism, we’re more likely to focus on how the extra calories affect our waistlines than on things like increased risk for colon cancer.”

Yet problem drinking, which covers both regular heavy drinking and occasional binge-drinking, is associated with a host of health problems for women. In younger women, heavy alcohol use (consuming five or more drinks in a row at least once a month) may damage bone quality and predispose them to osteoporosis decades later. It may also cause reproductive problems: A study of Danish women between the ages of 20 and 35 found that even five drinks a week could lead to decreased fertility. Other women could experience the opposite problem: a bender that results in an unplanned pregnancy.

Of course, health experts maintain that any drinking during pregnancy is a no-no. It puts your baby at risk for fetal alcohol spectrum disorder (FASD), a range of developmental disabilities caused by prenatal alcohol exposure. Yet it’s a problem that’s more prevalent than experts guessed. “The actual numbers are about three times higher than what we thought just five years ago,” says Dr. Cindy Loukras, a pediatrician in Peterborough, Ont. The latest Canadian research estimates that nearly 6 percent of women drink while pregnant.

The weighty side effect
If you’ve been having trouble dropping those last 10 pounds, you might want to look into your glass. Alcohol is high in calories: About two ounces of vodka packs 98 calories, and that’s before you add any mixers. And the usual suspects at any self-respecting holiday cocktail party? Eight ounces of white wine has 204 calories. A screwdriver is 243 calories. A gin and tonic, 235. A Caesar, 237.

And who among us has never had a few drinks and found ourselves — midway through training for a big run or boot camp — undermining our hard work by scarfing back handfuls of spiced nuts. Or bellying up to a pina colada on a girls’ night out (245 calories later!).

Even a relatively harmless brunch cocktail can affect a day’s nutrition, says Weikle: “If you had a mimosa, you very well may have passed on the calcium-rich smoothie.” Right?

How to lower your risk
So does this mean you should stick to club soda forever? Heck, no! For most of us, say the experts, “low-risk drinking” is the best way to toast any special occasion without regrets.

Not familiar with the concept of low-risk drinking? Follow the 9/2 principle as an easy rule of thumb. “Nine is the maximum number of drinks recommended per week for women — after that, there’s a spike in the risk of liver disease,” says Mann. “And don’t have more than two drinks per day.”

We know the notions of celebrating and drinking are so entwined it can sometimes seem impossible to have fun without a cocktail in hand. “I have someone who battles alcoholism in my family,” says Weikle. “And once you start to look at social outings through the eyes of a person who can only ever have the fizzy cranberry juice or a Diet Coke, you realize just how much our society connects drinking and fun. It’s not easy to be sober or even the moderate drinker in the crowd. There’s so much subtle and not-so-subtle pressure to imbibe.”

But don’t despair: It is possible to change that belief and still have fun without being lit like a Christmas tree. Start by making it sound fun: Enlist a friend to join you in a ‘drinking diet.’ This person can be your partner at parties where temptation might derail you.

At social events, make sure to eat before you have your first drink. Always turn down top-ups — they make it hard to keep track. Alternate your alcohol with sparkling water, which will give you something to hold and help you avoid a hangover. And if you feel like spreading your new-found knowledge, please do so over a cocktail or two, max.

Read the experience of one of our editors when she did a month-long ‘drinking diet’ by clicking here.

(By the numbers) How much is too much?

How long should you wait between drinks? 1 hour.

The max number of drinks women should have per week = 9

How many drinks do you have per week?