Empowered patient: When a congenital heart defect resurfaces, the outcome can be devastating, but it doesn't have to be. Here's how two women listened to their hearts to save their lives 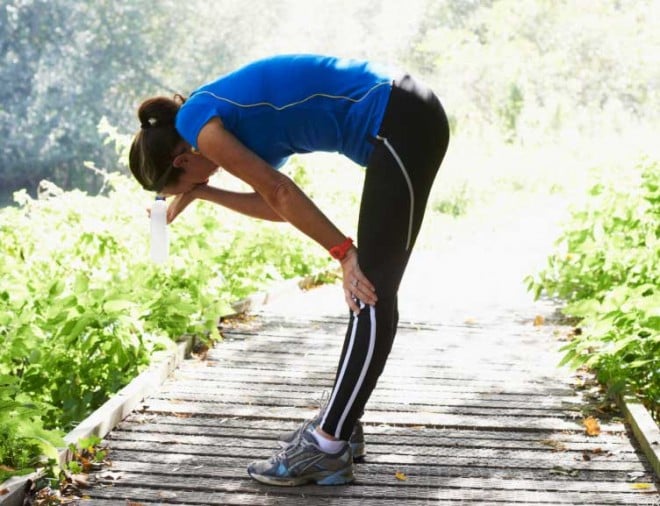 If you find you get exhausted very easily while running, it could be a sign of a heart condition (Photo by Getty Images).

Shelagh Ross thought her heart problems were behind her. Born with a heart defect called tetralogy of Fallot, the 51-year-old from Oakville, Ont., was a very sick child. As a baby, her skin had a bluish tone due to low blood-oxygen levels, and she was often too tired to nurse, or as she got older to chase after her three siblings. “My parents were told that if I didn’t have corrective surgery, I wouldn’t live past 12,” she says.

When she was two, Shelagh had her first major surgery. It helped increase blood flow and kept her alive, but it didn’t make life easy. She still remembers being pulled in a wagon because she didn’t have the energy to walk. “I just felt weak — I could never swim or run or hit a ball like other kids,” she says.

When she turned eight, she underwent a second operation: nine hours of open-heart surgery at Toronto’s Hospital for Sick Children. This time doctors repaired the four heart abnormalities of her condition: constriction of the pulmonary valve, a hole between the lower chambers of the heart, an enlarged right ventricle and a faulty aorta.

The surgeon called it the most challenging procedure he had ever done, but the result was immediate. “I went in blue and came out pink,” Shelagh says.

Her life changed overnight. “I basically got to do what everyone else was doing,” she says. She was able to cycle and ski, and, like many congenital-heart-defect patients, she eventually put the whole ordeal behind her. Little did she know there were bigger challenges ahead: Her heart was a ticking time bomb just waiting to go off — a discovery she wouldn’t make until almost 25 years later.

The beat goes on
About one in 100 babies in Canada are born with a congenital heart defect (CHD), and an estimated 130,000 adults currently live with one, reveals the Canadian Adult Congenital Heart Network. In fact, there are more people with congenital cardiac issues than there are with multiple sclerosis, Parkinson’s or cystic fibrosis, but despite this, public awareness is very low, says Dr. Erwin Oechslin, director of the Congenital Cardiac Centre for Adults at Toronto General Hospital.

There are dozens of CHDs; the most common types are tetralogy of Fallot, atrial septal defect (when the wall between the heart’s upper chambers doesn’t close properly) and ventricular septal defect (a hole in the wall that separates the heart’s ventricles). Many adults never outgrow them. “There’s a misconception that when a surgeon operates on a CHD, the patient is cured,” Oechslin says. “But that’s not true. CHD is a chronic condition.”

Shelagh rediscovered her issues at 33, when she awoke with a racing heart. “It was beating so hard and fast that I just lay there, trying not to move,” she says. Shelagh was admitted to the hospital for an urgent cardiovert, a procedure where electric shocks are administered to the heart to return it to its normal rhythm. “It was scary,” she says. “I almost died.”

She learned that her pulmonary valve was leaking and needed to be replaced. A surgeon fitted her with a pig’s valve, but it may be another temporary fix — it’s been nearly 18 years since the valve was put in and though it still looks good, she may eventually need a new one. “I’ll need another open-heart surgery in the future if the pig valve wears out,” says Shelagh. “At 51, I’m getting older .” The average lifespan for people with congenital heart defects is now around 50 years.

Know your heart history
Good news: The number of patients like Shelagh who are beating the odds is rising, thanks to better surgical techniques as well as increasing awareness among adults with congenital heart defects. Dr. Marla Kiess, director of Vancouver’s Pacific Adult Congenital Heart Clinic, says the number of adults arriving at her treatment centre is increasing by about 15 percent a year, which is proof that the message is starting to reach the right people and improve outcomes. But doctors worry that, despite the surge in patients, there’s still a huge number of people who are unaware of their congenital cardiac issues.

A 2007 survey of Canadian adult CHD centres tells the tale. “Only 23 percent of adults born with heart defects were being followed in these centres,” says Oechslin. “We don’t know where the others are.”

Linda Hope Dumcum, a 31-year-old in Toronto, was in that missing-persons category. In 2009, she discovered why she’d been physically unable to do high-impact sports. A random echocardiogram revealed a hole in her heart between the left and right atriums — it had likely been there since birth. As a result, her heart’s right side had ballooned, forcing her whole heart to work harder. She also found out she had pulmonary arterial hypertension, meaning the vessels delivering oxygenated blood to her heart were narrow and didn’t work efficiently.

“It affected my ability to do activities like running across the street or jumping,” says Linda. “I had to work my life around ‘Can I do this or not?’” Although a pediatrician had told her parents Linda had a heart murmur when she was a child, the issue never came up again. And when she complained to a doctor about her fatigue and lack of endurance during swimming, he chalked it up to other things. “He wrote it off as anxiety and never sent me for further testing,” she says. “It was frustrating.”

Unfortunately, now that she’s an adult, everything is more complicated. “It would’ve been easier to treat when I was a baby,” she says. She had hoped to have a child herself in the next few years, but Linda’s doctors think pregnancy could kill her. “I’ve been told, ‘Don’t get pregnant; don’t have kids. You die, the baby dies — it’s not worth it.’ Hearing that is like a massive snowball in the face.”

Hope for broken hearts
As in Linda’s case, many congenital heart defects are simply missed by family doctors and cardiologists in children and in adults. The problem is twofold: There’s very little awareness in the medical community, as well as a shortage of the specialized training and expertise needed to treat the patients.

Contrast that with 60 years ago, when most children with congenital heart defects died, and the sensational progress is evident. Plus, the development of new medications — such as blood thinners to prevent clots, angiotensin-converting enzyme inhibitors to improve blood pressure and beta blockers to slow an overly fast heart rate — means many patients can go on to lead long, healthy lives. Innovative surgical treatments, such as sophisticated catheters and devices that can close holes in the heart without major surgery, are also helping people live longer. Another cutting-edge technique, percutaneous aortic valve implantation, even allows doctors to replace faulty heart valves with synthetic ones.

For Linda, the clinic at Toronto General Hospital has led to miracles. The right medication has helped decrease her lung pressure by more than 50 percent, allowing her to run her first half-marathon in 2011. And she hopes she’ll soon get the green light to have a baby. “I just feel like there’s so much hope — even in what I thought was a hopeless situation.”

Are you at risk?
If you had a heart procedure as a child, your ticker may still be faulty even if you don’t show any symptoms. “Anyone who’s had an incision in their chest should go to a Congenital Heart Network clinic,” says Dr. Erwin Oeschslin, director of the Congenital Cardiac Centre for Adults at Toronto General Hospital. He says that even when surgery has repaired the heart defect, it’s essential to follow up with a team of cardiac specialists to ensure nothing has changed.

“If a fire is small, the fire department has an easier time putting it out,” says Oechslin. “But if the whole house is on fire, they may not be able to help you.”

Heart patient Shelagh Ross points out another reason to stay on top of congenital heart issues as adults: Children are often not told exactly why they had surgery, because everyone, especially the parents, just wants the problem to go away. So as an adult, people should find out their complete medical history.

It’s also important to note that people with Marfan or Down syndrome, and some other genetic conditions, often have congenital heart defects that may have been missed. If you have a history of excessive fatigue when exerting yourself, along with breathlessness, a blue tinge to your skin or an irregular heartbeat, get checked out.

Heart defects and pregnancy
With some conditions, such as narrow pulmonary valves or a lack of oxygenated blood, pregnancy can lead to life-threatening complications. But thanks to technological advancements, pregnancy is an increasingly viable option for women with congenital heart defects. The key is to get checked out at a specialized pregnancy clinic in an adult congenital heart centre. You’ll get a complete risk assessment and close monitoring during your pregnancy with special ultrasounds.

Action plan
Congenital heart conditions are more manageable now than ever before. Here’s how you can take charge and protect your heart

1. Revisit your childhood: “Many patients don’t know what surgery they had as children or what it means for their future,” says Dr. Marla Kiess, director of the Pacific Adult Congenital Heart Clinic in Vancouver. It’s important to find out what you were diagnosed with as a child and what type of surgery was performed.

2. Get customized care: Annual visits with your GP are good, but a quick listen to your heart likely won’t tell the whole story. Even seeing a cardiologist, especially one not trained in congenital heart defects, is likely not enough. Get a referral to a Canadian Adult Congenital Heart Network clinic in your province. “If you can get to one of those centres, you can get very good care,” says Dr. Andrew Reddington, division head of cardiology at the Hospital for Sick Children in Toronto. Go to cachnet.org/centres.shtml to locate a centre.

3. Have a healthy lifestyle: Exercise helps your heart. “Patients who exercise have a better quality of life,” says Dr. Erwin Oechslin, director of the Congenital Cardiac Centre for Adults at Toronto General Hospital. He adds that eating sensibly, keeping a healthy body weight and forgoing drinking and smoking can add years to your life.

4. Stay current and connected: Go online to read up on new drug therapies, surgical developments and clinical trials. And join a growing network of cardiac patients via the Canadian Congenital Heart Alliance. Go to cchaforlife.org for info.

20 essential tips for a healthy heart