Catch the happiness wave -- how to stay happy through the decades 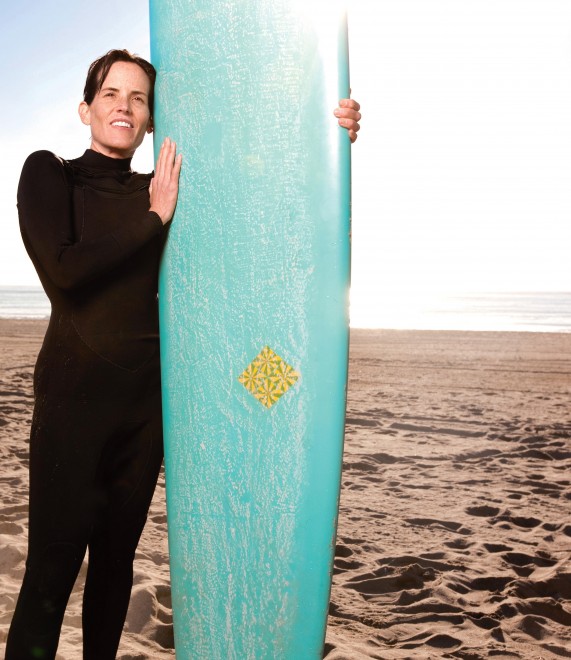 Sarah Brokaw, a therapist in Los Angeles, daughter of NBC newscaster Tom Brokaw and author of Fortytude, had her first panic attack at age 24. Driving down a freeway, she suddenly couldn’t breathe and had to pull over and find a pay phone to call her sister, who helped calm her down. A trip to the doctor confirmed the cause: panic. And the crisis? One Brokaw has since discovered can affect women in every decade of life: She was overcome by the feeling that she just wasn’t good enough.

Lately, experts have devoted a lot of time to figuring out why women don’t feel better about themselves. A 2008 study by researchers at the University of California showed that, although we start out more content than men, with every birthday our happiness takes a hit . The researchers also found that by the age of 48, men are happier and more satisfied with their lives than we are. Which is odd, considering how far we’ve come in the past 60 years. A recent study, “The Paradox of Declining Female Happiness,” published in Economic Policy, found that, despite the fact that things have improved socially and economically for most women, we’ve been gradually getting unhappier since the 1970s.

One theory for our growing angst is that the women’s movement simultaneously freed and trapped us. Thanks to our feminist forebears, we now have options. We can choose to pursue higher education, embark on any career and decide when, or if, we want kids. But with all those choices come new pressures and stresses, says Sarah. “Now, we struggle with the angst of freedom. When you have the freedom to choose, that’s when anxiety sets in.”

And with that freedom comes a new set of ideals and expectations. Women these days are supposed to get a degree, have a career, get married, have kids — and be amazing at all of it. We hear voices, Sarah says — not literally, but somewhere in our subconscious are the whispers of family, friends and society in general murmuring that, no matter how hard we try, we aren’t quite measuring up.

“I felt especially unworthy when I compared myself to my family,” Sarah says. Her father was winning awards for NBC Nightly News, her mother was an accomplished businesswoman and entrepreneur, one sister was an ER doctor and the other a Warner Music Group rep, and both sisters had families of their own. Sarah, meanwhile, was at loose ends. After collecting her college degree, she taught snorkelling in Guam, worked retail in Tokyo and, as she put it, “honed [her] drinking skills.”

But then Sarah used her panic attack as an opportunity to evolve — it was, she came to understand later, a “sparkling moment.” Her situation wasn’t a problem that needed fixing but an opportunity to change, experiment and push herself. So she enrolled in graduate school and became a successful therapist with a private practice in Manhattan. And it was good enough, for awhile….

The catalyst
When Sarah was 38, she decided not to attend her 20-year high-school reunion. She told people she had another commitment, but that wasn’t true. “I didn’t go because I wasn’t married and didn’t have kids,” she says. “I was embarrassed — I didn’t want to show up empty-handed.”

Despite all she had accomplished, she still wasn’t happy with herself. But for Sarah, ducking her high-school reunion became another sparkling moment, and the impetus behind her new book, Fortytude. “Judging how you will be perceived by others is a constant battle that we all face,” she says. “I decided I needed to go on a journey to figure out what other common issues women encounter as they age. I wanted to better understand what it is to embrace the aging process — and how to do it with confidence and curiosity, rather than fear and regret.”

Sarah spent two years travelling, doing research and talking to other women from diverse backgrounds about their experiences. She chose 40 of these women as “exemplars,” those who best embodied the five values (grace, connectedness, accomplishment, adventure and spirituality) she felt could give other women a mental and emotional framework in which they could thrive. Embracing these core values, she says, can help train you to become less judgmental of yourself.

Fortytude tends to be a little heavy on the self-affrmation (it conjures the classic Saturday Night Live skit best known for the catchphrase “I’m good enough, I’m smart enough and doggone it, people like me!”), but in light of all the research that suggests women have a collective inferiority complex, that may not be such a bad thing.

Throughout the book, Sarah explores common issues, whether it’s surviving as a single mom, reconciling yourself to wrinkles or coping with a crisis such as cancer. “Fortytude,” she says, “means not just getting over a hurdle — be it a serious health challenge, the end of a marriage or a financial struggle — but also finding happiness and joy in the calm periods that follow. It also means adopting a take-the-bull-by- the-horns approach to life if you’re not happy with where you are.”

Overall, she urges women to stop using every birthday as a benchmark for what they should have accomplished. “We are not our ages,” she says, “and we need to stop asking, ‘Am I where I’m supposed to be?’” Instead, she recommends using her five values as tools to explore who you are and what you could become. More a process of evolution than total reinvention, she says, it means honing and polishing what you have rather than scrapping everything and starting over. Best of all, it’s a process that can benefit women facing an identity crisis at any age.

20s: Blaze your own trail
Women in their 20s often find themselves thrown abruptly into the real world after high school or university without a support system, Sarah says. The structure created by going to class or living at home ends. “As women approach their 30s, they start to think they haven’t really accomplished anything,” she says. Which is when her five core values can come in especially handy. But the key is to learn to define them in your own terms. “When I think about how my mother defines ‘grace,’ it’s more of a quiet, soft-spoken Jackie O approach. But there’s no way I could possess those types of qualities. I needed to define it in my own words and then work on what grace means to me.”

One of the values Sarah thinks was particularly useful, as she looks back on her 20s, was the idea of connectedness. “When I had that panic attack, it was terrifying, but it made me realize that I needed to connect.” Whether that means seeing a therapist or finding a mentor, getting guidance can help you find direction in a decade when the options often seem overwhelming. But, says Sarah, women in their 20s also have to take responsibility for themselves. Practically, that might mean acting responsibly about money and figuring out how you’re going to support yourself. Emotionally, it’s about accepting that you won’t always know if you’re on the right path, because life changes all the time. “Everything is a continuum in terms of when you’re supposed to get married, when you’re supposed to get promoted, when you’re supposed to have kids,” she says. “The most important thing to remember is that everything can be achieved at any time.”

30s: Embrace your limitations
In the late ’90s, Swedish scientists conducted a study that found that women experience more stress in their daily lives than men do. One reason is that we’re still stubbornly trying to do it all — and we’re harder on ourselves when we can’t pull it off. A recent study by researchers at the University of Toronto found that women who take work calls at home feel more guilt and distress over them than men do, because they’re struggling with different demands and stereotypical expectations around work and family life.

It’s what Sarah refers to as the dark side of women’s lib: “Societal expectations about what we, as modern women, ought to be, do and have in order to deem ourselves ‘good enough’ have only become more complicated in the past few decades….We can get caught up in thinking that we have to accomplish a great deal in life in order to be worthy people.”

She recommends that women, especially those who are trying to carve out a career and a fulfilling family life, develop their own standards for what it means to be good enough. “We can begin by asking ourselves, ‘What do I want to achieve in life? What makes me feel good about myself ?’” When it comes to fostering the core value of accomplishment, she says that women need to appreciate all the areas of their lives where they feel a sense of mastery. For Sarah, it’s always been her career, surfing and friendships. When achieving your goals, she says, the key is “not to spend so much time climbing the next mountain that you forget to stop and appreciate the view from the hilltop you’re standing on right now.”

40s and beyond: Own your life
As women settle into their lives, they often find themselves in patterns that make them feel safe. This is an especially good time to turn to the core value of adventure, Sarah says. Adventure is all about pushing your comfort zone, and she uses her mother, who took up horseback riding at age 49, as an example. “She got quite skilled at reining [the western equivalent of dressage] and won a huge belt buckle that she wore with absolute pride.”

As you move through your middle decades, Sarah says, it’s important to embrace getting older. The idea that “40 is the new 30” denies the aging process, she says. “More importantly, aging is about how we capitalize on what we have when we come to that number, whether it’s 40 or 60, instead of trying to cheat it,” she says. “I feel blessed to have found so many women who have harnessed the core values, and I feel more equipped going into my 40s, 50s and 60s because of them.”

Sarah admits there are still days when she struggles with a sense of not being good enough. “At my lowest moments, I think, ‘What have I been doing with my life?’ When those feelings come up and the panic starts to set in, I remind myself to return to my values: ‘What matters most to me? Am I following my heart?’ We are all on our own journeys, with our own sets of blessings and challenges. I focus on the areas in which I feel a sense of mastery…then I take a deep breath and tell myself that I’m doing fine.”

Sarah’s 5 core values
Grace
Being generous and forgiving (toward yourself and others), equanimity.

Accomplishment
Knowing and appreciating what you’re capable of.

Adventure
Taking on new challenges outside your comfort zone.

Spirituality
Crafting your own approach to any belief system to help you find a sense of purpose and inner peace.