10 secrets to happiness (that really work!) 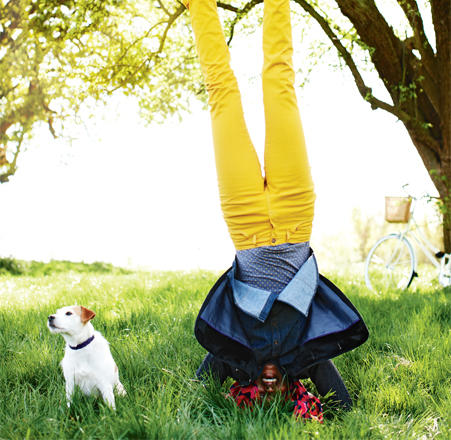 After months of research, exhaustive interviews with blissology experts (yes, they exist!) and 300+ blog posts on the subject, we’ve learned a lot about what it takes to put a smile on your face. “People have always been interested in the pursuit of happiness,” says Sonja Lyubomirsky, professor of psychology at the University of California, Riverside, and author of The How of Happiness: A Scientific Approach to Getting the Life You Want. “What’s changed is that now there’s real science behind it. There are neurologists, economists and medical researchers all studying happiness, so now we know a lot more about its benefits.” They include everything from having a higher income (a 2005 study found happier people land better jobs, are more satisfied in their positions and earn more) to better health and stronger friendships. So how can you have all that? Here are the fastest ways to feel happy.

1. Exercise, go to the theatre or have sex. (Not necessarily in that order)
Recent research from the London School of Economics and Political Science, reports these are three of the best ways to boost your mood, so pick the one that works for you! The study followed 45,000 iPhone owners who used an app to track their happiness levels up to five times a day. Turns out sex made people happiest (no surprise there!), followed closely by exercise and seeing a live play or concert. Bono or Broadway? It’s up to you.

2. Hold the door.
Random acts of kindness, such as opening doors for people, giving directions or stopping for pedestrians, can fuel a sense of long-lasting fulfillment, reports a study from York University in Toronto. “The effects of these acts can even last for up to six months,” says lead researcher Myriam Mongrain. “It’s a sort of twice-blessed scenario when you perform an act of kindness: The recipient believes maybe it’s not such a harsh world after all, and you feel good about helping others.”

3. Take a deep breath.
If you’ve always thought meditation wasn’t for you, maybe this will change your mind: It can actually alter your brain to make you happier. A study in Psychiatry Research: Neuroimaging found meditation enlarges parts of the brain related to compassion and shrinks parts related to stress and anxiety. To make it work for you, find a practice that fits your daily routine — whether it’s 10 minutes of deep breathing or just walking around the block, focusing on every step.

4. Practise gratitude.
Just remembering to be thankful for all the good things in your life is a no-fail mood lifter. A 2011 study from Hofstra University in Long Island, New York, discovered that grateful children are not only happier as kids, but also aren’t as likely to suffer from depression and will have better relationships with family members later on. Last year, the Girl Scouts of the USA introduced a Science of Happiness badge—one of the steps to earn it is to keep a gratitude journal of things to be thankful for. This exercise in self-awareness can benefit anyone—once you see all those good things on paper, it’s hard not to be feel full of joy!

5. Be curious.
“When we’re open to new experiences, positive events linger longer and we get more pleasure from them,” says Todd Kashdan, author of Curious? Discover the Missing Ingredient to a Fulfilling Life. He recommends regular active learning, by taking up hobbies like dancing or cooking. Or take a cue from New York City journalist Gaby Dunn’s 100 Interviews project: For a year, she talked to random people she found interesting, from an anti-abortion activist to a transgendered person—and gained new insight from her glimpses into other people’s lives.

6. Don’t shop til you drop.
It may be fun to sit and browse Etsy, but the benefits of retail therapy are short-lived. “The evidence is that more materialistic people are less happy,” says Christopher Barrington-Leigh, an assistant professor at the Institute for Health and Social Policy at McGill University. And research shows excitement over purchases doesn’t last—unless they’re for someone else. So the next time you pull out your wallet, use your shopping powers for good and pick up some healthy food for a food bank or clothing for a women’s shelter.

7. Touch someone.
Literally or figuratively, since strong social connections lead to joy and contentment. People who go to church, for example, are just happier, according to a 2010 study from the American Sociological Review. The study found it’s largely thanks to the companionship a congregation provides. As for the literal part, one way to build bliss in a romantic relationship is through touch, says Bonnie Jacobson, author of Save Your Marriage in Five Minutes a Day. “Touch is a basic need that we have at birth,” she says. “Creating a predictable and consistent pattern of touch helps feelings of security in relationship.” (Of course, massage works wonders, too!)

8. Laugh out loud.
How often do you laugh until your stomach hurts? Robin Dunbar, an evolutionary psychologist at Oxford University, says laughing releases feel-good endorphins, increases pain resistance and promotes social bonds. Albert Nerenberg, a pioneer in the “laughter movement,” recommends hosting a laughter party: Get together with a group of people and laugh until it becomes uncontrollable. Another good strategy is to smile more; scientists in Sweden found smiling is a contagious behaviour that helps happiness ripple across a room.

9. Love yourself.
Instead of having a hate-on for your hips, cut yourself some slack — research shows self-compassion makes women happier. And taking stock of your assets leads to smarter choices, like maintaining strong relationships and eating well. “If you care about yourself, you do what’s healthy for you rather than what’s harmful,” says Kristin Neff, an associate professor of human development at the University of Texas at Austin.

10. Find the awesome.
It’s easy to get bogged down in mundane daily routines (think flossing and sitting in traffic), but don’t lose sight of the everyday awesome. “I think that part of how you can be happy is by noticing all of the small, simple pleasures around you,” says Neil Pasricha, author of The Book of Awesome. Some of his favourite mood lifting moments include finally getting that little kernel of popcorn out of your teeth, picking the fastest lane in the grocery store and being greeted at the door by a dog who is overjoyed to see you.