The emotional effects of living close to a wall 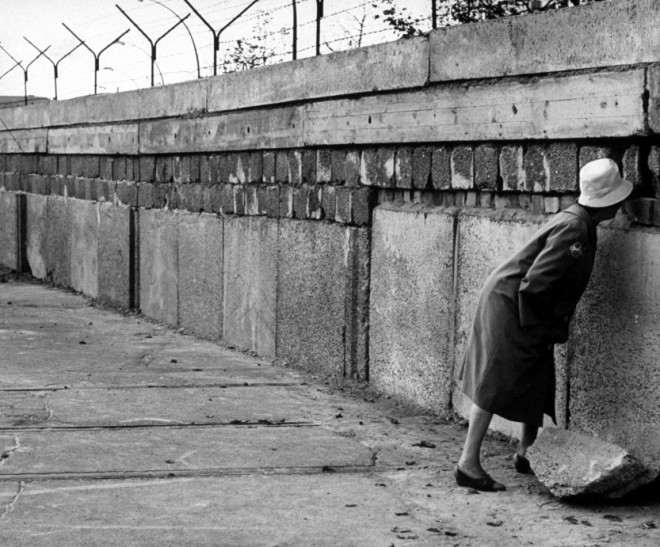 Woman looking through a hole in the Berlin Wall.
Photo by Robert Lackenbach/Time Life Pictures/Getty Images.

Anyone with a mother who calls daily can attest to the need for boundaries. But what about physical boundaries? How does the building of walls impact the lives of those who live in their shadows? Marcello Di Cintio, author of Walls: Travels Along the Barricades, explored eight political hot spots where walls split people, land and loyalties. Here, he discusses how living alongside a wall can affect daily life and erode psychological health.

Q: How did you decide where you wanted to go when it came to writing the book?
A: It was a series of eight different trips over four and a half years. I wanted places that people knew a lot about, like the U.S.-Mexico border, and the Israel-Palestine wall, and some places people might not know about, like the India-Bangladesh wall.

Q: Did you spend much time thinking about the figurative or literal interpretation of physical walls?
A: When I started, I thought the book was going to be about how these walls symbolize fear and hatred and failure and racism. But when I started doing the actual travelling and meeting the people who live along these walls, I realized that my perception was a kind of luxury. For the people who live with these walls, they are physical, concrete barriers that keep them or someone else away. For them, they’re not just symbols. And that’s when I realized the book was going to be about actually living in physical proximity to these very physical structures.

Q: How do you think that living alongside a wall affects daily life?
A: It’s different in each case. The wall in Belfast does something different than the wall in Palestine. But walls everywhere help create an “us” and a “them.” In every single case, the walls design and preserve a sense of enemy. The people on the other side must be my enemy, otherwise why would this wall be there. Walls fossilize these conflicts, casting them literally in concrete and steel. A wall suggests danger, and the need for greater security than simply a line on a map. In some of these places, like Israel, they won’t even call these things “walls” because the term is so powerful. Instead, it’s a “security fence.” A fence calls to mind something that’s built between amicable neighbours, something you can still pass a cup of sugar over. That’s not what these are.

Q: Can you explain the psychological findings related to living in close proximity to the Berlin Wall?
A: An East German psychiatrist discovered that those who lived closest to the Berlin Wall suffered higher rates of depression and alcoholism, and live in households with more domestic violence. He called it “the wall disease.” When the wall did come down, there was an emotional liberation; it wasn’t just about political freedoms. I saw similar symptoms of wall disease all over the world.

Q: What did exploration of the walls we build teach you about human nature?
A: I think there’s a sense that we live in a world where we can’t control anything. Borders don’t mean anything anymore — not to commerce, not to culture and not to communication. Maybe there’s something inherently human about trying to exert control. But the opposite is also true. If it’s a human impulse to build walls, and the ancient Romans and Chinese did it, then it’s also a human impulse to tear those walls down. We have a tendency to try to subvert those walls, whether by physically scaling them or knocking them over, or by using art to transform their meaning. The better part of human nature resists the building of walls.