Meet eight women who overcame injury, beat depression and connected with God – all by putting one foot in front of the other 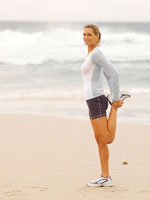 It’s no secret that walking is good for your health. From building muscle to warding off depression, a regular jaunt can help tune you up both physically and mentally. Meet eight women who have first-hand experience of walking’s life-altering powers.
Baby blues

Business management consultant Katy Kaposi felt isolated after the birth of her first child. Used to working long hours in a busy office, the 36-year old from Toronto didn’t know women in her neighborhood and found it difficult to settle down to the often lonely job of stay-at-home mom. So she joined a mom’s group, where she met up with 10 other women and their babies two to three times a week for an hour-long walk. “I lost 35 pounds in seven months,” she beams. “And it helped me get through the loneliness of being on my own [at what was] a very difficult time for me.”

Joanne Schiweck-Doherty of Edmonton used to call herself athletically challenged. From cycling to soccer, she tried it all but just couldn’t get in the groove. That is until she discovered race-walking: a sport where you walk quickly with a straight front leg and one foot always in contact with the ground. Now, every Wednesday night, she joins a group of race-walkers and a coach for an hour-and-a-half walk around Edmonton’s River Valley. “I would never have dreamed of competing with others in athletics,” says the 45-year-old claims manager. “The last race I was in I came in almost last, but it didn’t matter. I did it, and now my goal is to get faster.” Her next stop on the race-walking circuit: the 2005 World Masters Games in July.

Marija Kerr, a 58-year-old office manager from Vancouver, uses walking to help save other peoples’ lives. Kerr walks along the beach every day for 45 minutes to an hour. Sometimes, she catches up to other walkers and asks if they want to play a game: “I tell them I’ll give them five minutes. They can tell me all the things they don’t want to tell anyone else. They’ll never see me again.” One woman recently told her that she was thinking of cheating on her husband of 25 years. Another complained about her horrible boss. “I was just listening so they could tell me everything they wanted,” she says. It makes her feel good just to be there, lending an ear to those who need it.

Walking is a spiritual experience for Toronto’s Cherilyn Scobie. The 29-year-old high-school teacher devotes one hour, five times a week to walking around her neighbourhood. “My walking time is my time to spend with God without any distraction,” she says. “When I walk, I pray to God and ask him to guide my decisions and movements.” She also prays for friends and family members. A year ago, Scobie’s baby nephew was admitted to the hospital. “The doctors couldn’t determine what was wrong with him,” she says. “I was afraid, and there was nothing I could do about the situation.” Knowing she needed to be strong to support her family, Scobie would walk and pray for strength and guidance to get through the difficult time. Her nephew is now healthy, and her family remains grateful for her unflagging strength and support.

Without walking, 42-year-old registered nurse Deborah Halldorson of Edmonton gets sad. Really sad. “I am chronically depressed and I take anti-depressants,” she explains. “Walking just keeps me feeling good. It’s like someone has turned on all the lights in the world, but they’re in your brain.” For five years now, Halldorson has been walking for 30 minutes to an hour, five times a week. Since she started walking, Halldorson says she has a lot fewer emotional ups and downs than she used to. “I don’t go off the deep end so much,” she says.

Karen Herzog, also an Edmonton race-walker, used walking to heal from a car accident that left her badly injured. It took a year-and-a-half of intensive physiotherapy to get back to normal. Throughout the therapy, Herzog would gain strength by visualizing herself race-walking. “Finishing [a race] was something I was so looking forward to doing again,” says the 48-year-old human resources consultant. After her therapy, Herzog eased back into walking, beginning to train slowly, mostly during lunch hours, then with a race-walking club Wednesday evenings or after work. “I had a lot of anguish to get over, and race-walking was something I really had to work at,” she says. “Race walking helped strengthen my body,” she says. Now she schedules her week around lunch and evening walks – and actually gets grouchy when she can’t get out.

38 year-old Suzi Morrison walks for half an hour, three to five times a week. Her favourite walking partners: daughter Victoria, seven, and son, Gabriel, four. After the wintertime birth of Victoria, Morrison says she felt trapped indoors. “I was thrilled to have this little angel, but I didn’t know what [else] I was supposed to do,” she recalls. Come mid-January, she couldn’t take being cooped up any more and began taking little Victoria on walks. “We both felt much better,” she says. “[Victoria] enjoyed being outside and checking out the world, and I felt great to be outdoors in the fresh air, walking off the weight.” Morrison kept up her walking routine after Gabriel was born, and believes that this exercise helped build a good relationship with her kids, allowing them to explore the world together.

Designer Aileen Beninger loved living in Toronto. Surrounded by supportive friends in a creative city, she felt like she truly belonged. But when she followed her partner to Calgary six years ago, 48-year-old Beninger suddenly felt alone. “I really struggled emotionally, and my self-esteem hit rock bottom,” she says. So Beninger joined Adrenaline Rush, a race-walking group that meets once a week for interval training and on weekends for an hour-long walk. “I love the group of people that I walk with,” she says. “Over the last two years we have all worked really hard, and some of us have made incredible strides and have really become supportive friends.”