Vegetarians: Beware the carbs and cheese

When Claudia Osmond’s son Matthew was 12, he told her he didn’t want to eat meat anymore. 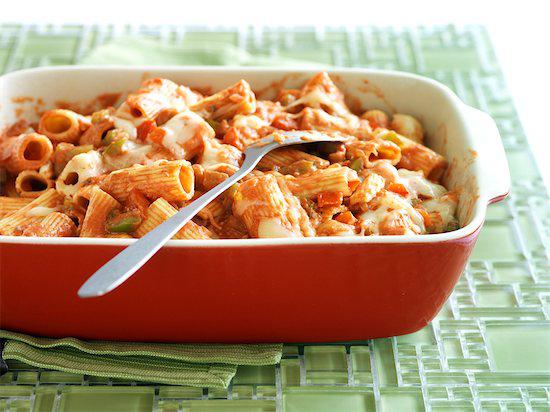 When Claudia Osmond’s son Matthew was 12, he told her he didn’t want to eat meat anymore. “He’s always loved animals,” says Osmond, who lives in Toronto with her husband and three kids. It was a big adjustment. “We’d cook vegetarian for him, and the rest of us would eat meat,” she says. She worried about her son getting all the nutrients he’d need, but he seemed to thrive on his vegetarian diet — and four years ago, thinking it would be good for her health, Osmond converted too. She and Matthew, who’s now 19, are both vegetarian, but her husband and two other kids are not. “There are always two pots going in the kitchen.” If the family’s having pasta one night, they’ll make a meat sauce and another with tofu instead of beef.

Serving family dinners from two separate pots isn’t so unusual anymore. With more people eating less meat or eliminating it altogether, meat sales have slumped: an analysis of fresh food sales from market researcher Euromonitor International showed that while meat sales in North America and Western Europe grew by less than 14 per cent from 2005 to 2010 — making it one of the worst performers — sales of meat substitutes boomed. People switch to vegetarianism for all sorts of reasons, from environmental concerns to the high cost of protein, but for many of them, health is a big motivator. That’s why former U.S. president Bill Clinton, a long-time lover of barbecue and chicken enchiladas, went vegan. After two heart procedures, including quadruple bypass surgery, he cut meat, dairy and eggs from his diet.

Even so, abandoning meat doesn’t necessarily make for a healthier lifestyle, as new results from the Symptom Proler show. Among the 29,138 people who completed the online survey in 2010-11, six percent were vegetarian. While female vegetarians were as healthy as meat-eating women, male vegetarians were worse off than their peers, suffering especially from gastrointestinal and musculoskeletal symptoms. Dr. Elaine Chin, co-founder of the Scienta Health Group, which developed the Symptom Profiler, has noticed “major nutrient deficiencies” among her vegetarian patients, she says. As for why male vegetarians seem to be more affected than females, “I don’t want to misrepresent males. Some are very conscious of a well-rounded diet.” But in general, she says, “I think women do a little more homework about being a vegetarian.”

Although meat-eaters are thought to have a higher number of cardiovascular risk factors than vegetarians, those who don’t eat animal products aren’t immune. A strict vegan diet can lack several key nutrients, including iron, zinc, vitamin B12 and omega-3 fatty acids, which are abundant in oily fish like salmon, according to a 2011 study in the Journal of Agricultural and Food Chemistry. And while a vegetarian diet can provide enough protein, it may be lean on fats and fatty acids, creating risk factors for heart disease. “Vitamin B12 is an especially tricky one,” says Shelley Burns, a naturopathic doctor and health services director at Scienta Health. The best sources come from animal products: fish, meat, eggs, and dairy. (Some breakfast cereals are fortified with B12.) Crucial for red blood cell formation and brain function, low B12 levels could cause “depression, anemia, or memory impairment,” says David Smith, a professor emeritus of pharmacology at Oxford University, who recommends vegetarians take a B12 supplement. (For meat eaters, he says, a good source is liver paté.)

In the future, high doses of B vitamins could actually be prescribed to seniors to ward off mental decline. “The brain is shrinking as we get older,” Smith notes, and among the elderly with lower levels of vitamin B12, “it’s shrinking much more rapidly.” About one in six elderly people suffer from mild memory problems, and around half will go on to develop dementia, mainly Alzheimer’s. In a new study from Smith and his team at Oxford, elderly adults were given high doses of B vitamins in daily tablets. After two years, these seniors had a reduced rate of brain shrinkage and better cognitive function than another group on a placebo.

Osmond and her son, who do consume eggs and dairy, take nutritional supplements and get regular checkups to monitor their health. But another challenge of maintaining the diet, she says, is the temptation to swap in heavy carbs to replace the protein they don’t eat. “If everybody is throwing a steak on the barbecue, it’s so easy to say, ‘Let’s have pasta,’” she says. “You have to be careful.” Burns, too, has noticed the vegetarian tendency to rely too heavily on “carbs and cheese.”

These findings come from a team led by Dariush Mozaffarian, a cardiologist and epidemiologist at the Harvard School of Public Health. Vegetarians need to be careful not to eat too many low-quality carbs. Even so, the vegetarian diet “is defined by what is not consumed, rather than what is consumed,” Mozaffarian told Maclean’s in an email. “The latter is much more important.” Dr. Dean Ornish, who helped Bill Clinton make the switch in his own eating habits, would agree. “He’d tried moderate changes, and it didn’t go far enough,” says Ornish, president of the non-profit Preventive Medicine Research Institute and clinical professor of medicine at the University of California at San Francisco, who’s worked with Clinton since 1993. “So I asked him, can you make a big change? And he did.” Not everybody needs to drastically modify their diet — but pretty much every­body would benefit from consuming more fruits, vegetables, and whole grains, he notes. “If you’re not ready to become a vegetarian, have one meal a week that’s plant-based,” Ornish suggests.

Osmond, who used to be a “huge meat eater,” says she feels healthier since going vegetarian, and doesn’t crave meat (not even bacon) anymore. In her home, cooking a veggie version of dinner each night has become a ritual. “Now it’s just our way. I automatically buy meat and soy meat at the grocery store,” she says. “It’d be weird not to.”