Vaccines Are Extremely Effective Against The COVID Variants Of Concern, A Canadian Study Says

Whether it's Pfizer, Moderna or Astra Zeneca, the vaccines used in Canada 'are doing exactly what they should be doing,' including against the Delta variant. 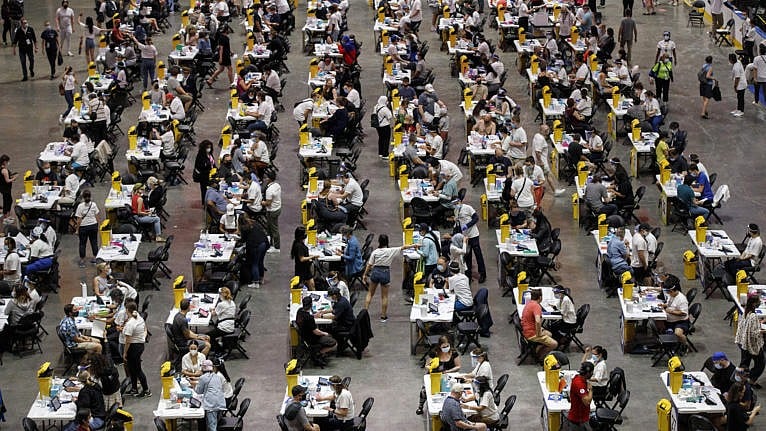 People receive a dose of the COVID-19 vaccine at a mass vaccination clinic at Scotiabank Arena in Toronto on Sunday, June 27, 2021. (Photo: The Canadian Press / Cole Burston)

Researchers around the world are sifting through data to determine how the leading COVID-19 vaccines are doing against the variants of concern. Now, a big pre-print study from Ontario suggests that the vaccines used in Canada—Pfizer, Moderna and AstraZeneca—are very effective against the four big variants of concern: Alpha (B.1.1.7), Beta (B.1.351), Gamma (P.1), and Delta (B.1.617.2).

“Our findings suggest that even a single dose of these three vaccine products provides good to excellent protection against symptomatic infection and severe outcomes caused by the four currently circulating variants of concern, and that two doses are likely to provide even higher protection,” the authors concluded. The study’s results showed that being fully vaccinated gives a person roughly the same protection against Delta as Alpha, Beta and Gamma. The data shows that the vaccines are doing even better than previous studies suggested against the variants in terms of symptomatic infection as well as hospitalization and death.

“Vaccines are doing exactly what they should be doing,” says Dr. Zain Chagla, an infectious diseases physician at St. Joseph’s Healthcare in Hamilton and an associate professor at McMaster University. “Getting vaccinated is the most effective intervention against the spread of COVID-19 and all of the variants.”

The study compared the vaccination status of community-dwelling Ontarians who were exhibiting COVID symptoms and got tested between December 2020 and May 2021, dividing those 420,000 people into two groups: those who tested positive for COVID-19 and those who tested negative. The researchers used information from the province’s rapidly expanding genomic sequencing program to track the variants of concern (VOC) among those who were positive. They also point out that the number of cases of specific VOCs in the study depends on when those variants were first identified in the province.

The team was led by researchers at ICES, an Ontario-based research body that evaluates health care delivery and outcomes, as well as the Dalla Lana School of Public Health at the University of Toronto and Public Health Ontario. The preprint study was uploaded to medRXiv, a free online archive and distribution server for complete but as yet unpublished studies.

The study’s topline results looked at vaccinated people who had received the first dose at least 14 days earlier or the second dose at least seven days earlier. (Because Ontario only recently switched to promoting second doses in the community, there wasn’t always enough data to compare the effectiveness of vaccines versus the newest variant, Delta; as well, the eight- to 12-week interval between doses of AstraZeneca reduced the amount of its data.)

The results “look very similar if not a bit better than the United Kingdom,” Chagla notes. In particular, Moderna seems to be more effective after first doses than either Pfizer or AstraZeneca, the authors note. As well, the effectiveness of AstraZeneca in the Ontario study appears to be higher than one released in June from Public Health England. Chagla wonders if the discrepancy is because of Canada’s first-dose first regimen that delayed second doses by up to 16 weeks, thus “allowing more immune maturation before second doses.”

On July 5, Ontario reported 170 new cases of COVID-19 and just one admission to an ICU and one death. “Our first-dose policy is likely what is giving us the sustainable decreases we see today, and the lack of acute care [demand] as compared to prior” months, Chagla says. “In the face of a more infectious and potentially more virulent variant, we are seeing hospitals and ICUs empty and the health care system restart.”