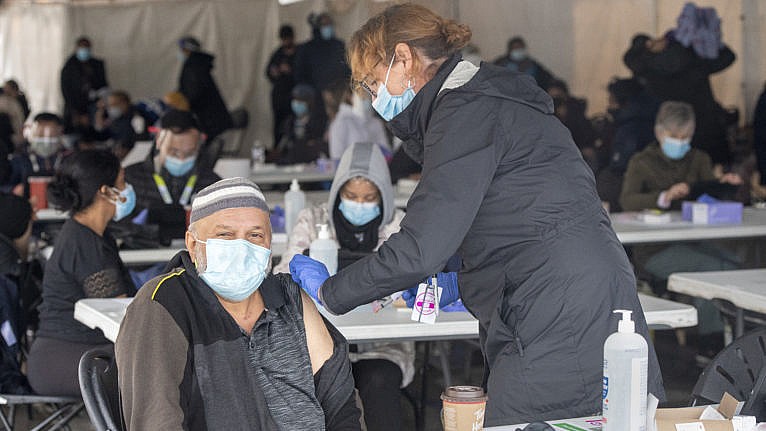 A nurse administers a COVID-19 vaccine at a pop-up clinic at the Masjid Darus Salaam in the Thorncliffe Park neighbourhood in Toronto on Sunday, April 11, 2021. (Photo: The Canadian Press/Frank Gunn)

Many Canadians are discovering that finding a vaccination appointment isn’t as easy as it should be. Much of the confusion and concern is centred in Ontario: In addition to implementing frequent changes to eligibility requirements that vary by region, the province is experiencing logistics problems with its decentralized system of delivering shots into arms. The result is that, while Ontario administers more than 100,000 doses a day and has around a million doses in freezers, local health units are cancelling tens of thousands of appointments for lack of supply.

Now, groups of volunteers are springing up to help. In Ontario’s York region, Shanta Sundarason started Pink Cars, which helps people schedule appointments and get to the clinics via volunteer drivers. Groups like Vaccine Hunters Canada, which started a month ago, are focusing on spreading information about vaccine availability as widely as possible. On April 12, Vaccine Hunters had 10,000 followers on Twitter. Three days later, that number had climbed to 37,500.

Its premise is simple: Tell people across Canada where to find appointments for vaccines. Vaccine Hunters Canada sends out dozens, sometimes hundreds, of tweets a day, each of which starts with the two letter code for the specific province. For example, this tweet from April 14:

Josh Kalpin, a software developer who lives in Toronto, is a member of the team at Vaccine Hunters Canada. Maclean’s asked him about the group, what it does and how others can help. The conversation has been condensed and edited for clarity.

How and why did Vaccine Hunters Canada start?

The person who created it was originally keeping a close eye on eligibility changes for his parents, and he was able to get both of them vaccinated. He noticed that there was a website called VaccineHunter.org in the United States, [and thought] we needed something like that in Canada. He created VaccineHunters.ca, set up a Discord server (they have 2,400-odd members on Discord, the invite-only group chatting platform used to help coordinate activities). And we have a Twitter account, @VaxHuntersCan, where we blast out all of our information.

How do you find all of these tips that you are putting out on Twitter?

We use a tool called Tweetdeck, which acts as a dashboard for our Twitter account. Using Ontario as an example, every public health unit Twitter account is added to [a Twitter] list, and all the hospitals we know of that have different eligibility requirements; reporters as well. We also get a lot of tips on Twitter. “Hey, Vaccine Hunters, blah-blah-blah pharmacy has 1,000 appointments.” We were getting tips directly from different places. And we get a lot of direct messages.

And the [Discord] community is giving us a lot of information. People post a lot of things on Reddit and we check that throughout the day. A lot of it is becoming crowdsourced.

Can you give some examples of people Vaccine Hunters have helped?

Our big-name success story is the actress Jean Yoon, who plays Umma [on Kim’s Convenience]. We got her an appointment from the information we sent out. And she sent us an endorsement: (“Go to @VaxHuntersCan where they’re posting info incl last minute changes,” she tweeted on April 2). The information we sent out directly led to her getting a vaccine.

Then we had someone message us on Twitter saying she had a number of young adults with developmental disabilities and she was trying to get them all appointments. English wasn’t the first language [of some of their parents]; some of [their parents] didn’t drive. We were like, “OK, this one will go here. You can arrange a ride through one of these services.” I think we were able to find every single one of them an appointment this week, which is kind of crazy.

One of our helpers came in originally because she was trying to get an appointment for her father. So we helped her get that. And now she’s turned into the go-to person in the community where random people who are eligible in hot spots are just reaching out to her and she’s gotten easily over 100 appointments at this point.

Are you discovering any concerns about how accurate the information is? Or is that not an issue right now?

Any time we get a tip, we try to verify it ourselves.

We are very cognizant that a mistake can be bad and we have deleted a number of tweets after we found out that [the information was] not quite true or there was a mistake in the tweet.

What does the fact that you have to do this say about the vaccine rollout in Ontario and in Canada?

Honestly, we try to take a very apolitical stance. We identified a problem: We need to get the shots in the arms. The problem is that we have a pandemic and we’ve been in this nightmare for over a year and the way out of this nightmare is a majority [of Canadians get] fully vaccinated.

Even if there was a centralized system, there is no way to make this perfect. I think regardless of the circumstances, we would still be needed. And I think that we’re serving a purpose that is important.

Is there a place where you’re not seeing as much of a need for help, who where things seem a little more streamlined?

I think Guelph has done a phenomenal job. I think they’ve had very clear messaging overall. They’ve said, “We’re going to pre-register everyone,” and that’s it. We don’t typically have a lot of people asking questions from [Wellington-Dufferin-Guelph Public Health Unit].

Ontario is the largest province, so it’s natural to have a lot of queries from there. Are there other provinces you don’t really hear from? Or ones that are good about promoting vaccine appointments in clinics or pharmacies?

Most of our community is centred in Ontario. With 38 percent of the population, there are a lot of people, a lot of different demographics.

But we really want to expand it outside Ontario. We just onboarded one [contributor] from Quebec. We do have some stuff from Alberta and British Columbia, but it seems like there is a little less news from those places. Whether that’s the way the rollouts are happening or not I can’t say, but most of the news we get is around Ontario.

How much time does it take out of your day?

This is the question that my manager [of his full-time job] is going to hate to hear. If you’re listening, I’m sorry [laughing].

Most of my time spent on this is after work. During the actual day, [I’ll work on Vaccine Hunters] if there is something big. [On April 13], we had 18-plus hotspot alerts in the space in the hour. But most of the time it’s in the evenings.

What has the reaction been from the public?

Joy. Exuberance. The reaction seems to be, we help someone get an appointment for a family member or for themselves and then they [want to help] other people as well.

I think this group, in addition to helping people, is giving a lot of people who may be stuck at home something that is meaningful in our lives. It is kinda wonderful.

Looking ahead, what do you say to other people who are thinking of doing something like this?

I would implore every Canadian to reach out to every single person you know—friends, family, co-workers, members of your community, neighbours, people who you know where English or French may not be their first language—and help them get a vaccine if they are eligible. We are not going to return to normal until the majority of our population is vaccinated.

I want to hug my grandparents, but I can’t do it until we get through this. And that’s what I’d say to people. Every person you help will help us get closer to that goal of the society that we remember before this pandemic started.