Triumph and tragedy at the Toronto Marathon

The Scotiabank Toronto Waterfront Marathon, which also includes a half marathon and a five-kilometre run, was on Sunday — it was a mixture of triumph and tragedy. 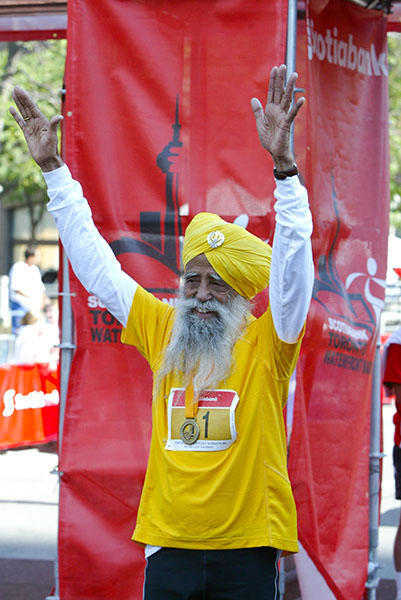 The Scotiabank Toronto Waterfront Marathon, which also includes a half marathon and a five-kilometre run, was on Sunday — it was a mixture of triumph and tragedy.

The tragedy is that a 27-year-old man died of a heart attack near the end of the half marathon. There is no indication yet as to why this happened, and I won’t speculate. Sometimes people die from strenuous effort. Snow shoveling kills many each year.

I just hope this terrible occurrence doesn’t put people off running. Again, we have no idea why this happened, but it does provide the opportunity to remind people of the importance of ensuring that you are in the proper condition for a race.

First, let’s talk about the guy who seems to be getting less press coverage: 80-year-old Ed Whitlock ran the full marathon, a distance of 42.2K, in 3:15:54. That’s the qualifying time for the Boston Marathon for my age group, and I’m only 43, not far off half his age. If he had been just 54 seconds faster, he would have met the qualifying time for Boston for the 35-39 age group.

Qualifying for Boston is actually not on my exercise bucket list — I don’t think I have it in me. If I trained hard for a year, gave up weight lifting to drop some “useless” muscle weight, and just focused on getting as fast as I could, I might be able to match Whitlock’s time. I simply cannot fathom an 80-year-old running a marathon that fast. It blows the mind. And yes, this was a world record for his age group.

We’ve got another world-record-making story of triumph: That of Fauja Singh, who became the first centenarian to ever finish a marathon. It took him more than eight hours, but seriously — the guy is a hundred!

I’ve mentioned to some people that I’d like to live to be a hundred. I’m taking good care of myself and have some half-decent longevity genes, so it’s not completely unreasonable. Now after reading about Singh, I’m hoping I’ll become a centenarian and still be running. It probably won’t be a marathon, but maybe I’ll still be able to handle a 10K.

My heart goes out to the family and friends of the racer who died, but it also sings in triumph for Whitlock and Singh, who show an unrelenting spirit in refusing to let age slow them down.