How Recurring UTIs Wrecked My Honeymoon

I've struggled with chronic UTIs most of my adult life. Here's my advice on how to handle the pain—and avoid it in the first place. 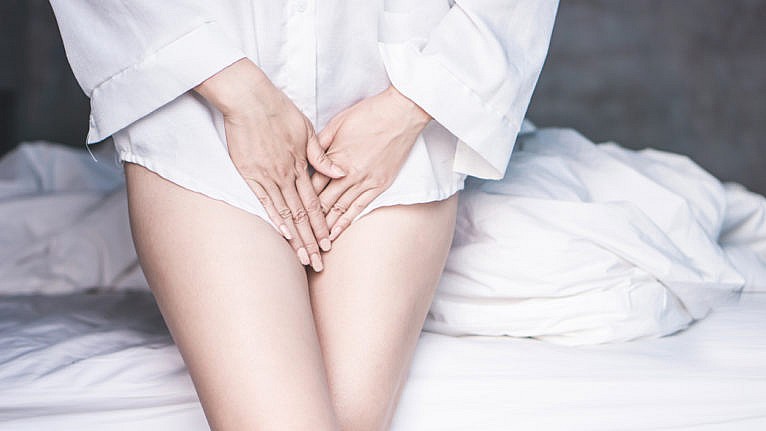 I always imagined my honeymoon going something like this: My husband would carry me into the honeymoon suite of our hotel, where candles lit up the room and a bottle of champagne chilled in a bucket of ice on the side of the bathtub. I’m sure you can guess what happens next.

Cut to reality: The night of our wedding, we’d both had too much alcohol—something my UTI-prone bladder did not thank me for—to do anything more than sleep. The next morning, I drank as much water as humanly possible, given the limitations of travelling between airport gates. Finally at our destination, we quickly consummated our marriage in our hotel room, but I made my husband wait on the bed (sans rose petals) while I emptied my bladder first. My second trip to the bathroom, immediately after sex, was so painful, I downed the first dose of antibiotics I’d brought with me, along with an entire bottle of water. I spent the rest of our Florida honeymoon fighting off my husband’s attempts at seduction, thanks to my constant need to pee and the mild pain between my legs. (Though I did give in to temptation once or twice. He’s pretty cute, after all.)

A urinary tract infection (UTI) is a combination of symptoms, including dysuria (painful urination), frequent and/or urgent urination and sometimes leakage—and up to 60 percent of women will experience a mild one in their lifetime. Several factors can predispose a woman to contracting a UTI (including dehydration, bacteria from the vagina entering the urethra and attaching to the bladder, certain medications or medical conditions). If they occur three times or more in a year or twice in six months, a UTI can be diagnosed as recurring—as is the case for me. I started having sex when I was 17, and got two urinary tract infections within the following year, less than six months apart. By the time I was 19, it had become a recurring problem: I was being diagnosed with a bladder infection, a type of UTI, almost every three months.

Even though I knew sex was the reason I frequently ended up spending hours at a time in the bathroom while I was in university, missing class and unable to get to the water fountain to rehydrate, no one was going to tell me (or my boyfriend) to do it less often—especially since none of my friends seemed to suffer as badly as I did. I figured it had to be the way we were doing it instead of frequency (I hadn’t yet been told the pee-after-sex rule), and so I swore off anything I thought could be a trigger, such as condoms with spermicide, and any and all synthetic lubricants. I don’t actually know if these changes helped, but at the time I was willing to take any improvement, however minuscule or imagined. Things got so bad that at one point I wore a pad during the drive home from school so that I could relieve some of the pain by peeing into it a little bit at a time.

My breaking point came during a trip to Florida with my university boyfriend’s family. The combination of sex, sweating in the August heat, and low water intake led to the worst infection I’ve ever had. In crippling pain, the timeline went something like this: At least an hour in the bathroom at Sea World, followed by another three (or more) hours in the bathroom at the Kissimmee Cracker Barrel, mortified that everyone was waiting for me to come out before ordering dinner. The next day, we had to stop off in Yeehaw Junction on the drive down to Miami so I could use the scariest gas station bathroom I’ve ever seen. All of this was capped off with a final sprint through Toronto’s Pearson airport to find a bathroom because our plane hadn’t had one, and my options were to find one immediately or pee myself—a dilemma I’ve faced far too often at 27 years old.

So you can imagine why, when I returned to Florida six years later for my honeymoon with the same boyfriend-turned-husband, I was afraid of an encore.

Several factors can predispose a person to contracting a UTI. Looking back, I usually had at least one of them: dehydration. People are generally supposed to drink 1.5 litres of water daily to stay properly hydrated, says Dr. Lynn Stothers, director of research at the Bladder Care Centre for the University of British Columbia. This surprised even me, H2O devotee that I now am. Back then, though I drank water with meals and during exercise, regular intake wasn’t part of my daily routine. Other factors that can make one more susceptible to contracting a UTI include diabetes, certain medications and being immunocompromised.

But the most common trigger for most women, says Dr. Stothers, is sex. During intercourse, bacteria commonly found on the skin in and around the vagina get pushed up the urinary tract and attach to the bladder wall, causing a bacterial UTI, or a type of UTI called a bladder infection. Urine tests are used to detect them, as there are other disorders—such as diabetes, appendicitis, and some STIs—that mimic UTI symptoms of painful urination, blood in the urine, or even incontinence.

Leading up to our honeymoon, I started developing major anxiety around having sex. I’d been examined by a urologist, who told me my UTIs had given me a prolapsed bladder and disfigured urethra, but beyond the option of surgery with a low success rate, there weren’t many options beyond symptom management. I took matters into my own hands, learning to pee before and after sex, cutting down on dehydrating caffeine and alcohol, getting well-acquainted with pure cranberry juice, and generally accepting the fact that these measures were going to be the new normal for the rest of my life.

I spoke with my family doctor about the possibility of developing a UTI on my honeymoon, and he wrote a prescription for short-term antibiotics I could take if there was an onset of symptoms, also known as self-start treatment. Though my honeymoon wasn’t what dreams are made of, the only reason I let my husband anywhere near me was because of those pills. Needless to say, our sex life has its ups and downs (doesn’t everyone’s?)—worsened, certainly, by my condition. It might not be as spontaneous as he’d like, or as romantic as I’d like, but we’ve found our own way through that. And with my doctor assisting me with symptom management, things are looking up.

Afterward, while talking about our trip with friends, one of them expressed shock at how little sex we’d had. “Didn’t you know Vicky’s got the bladder of an 80-year-old?” his girlfriend joked. It’s true, but I still died a little on the inside.