You probably need therapy. Soon, you might even be able to afford it

With the stigma around mental illness finally crumbling, advocates have a new goal: a publicly funded path to the couch. 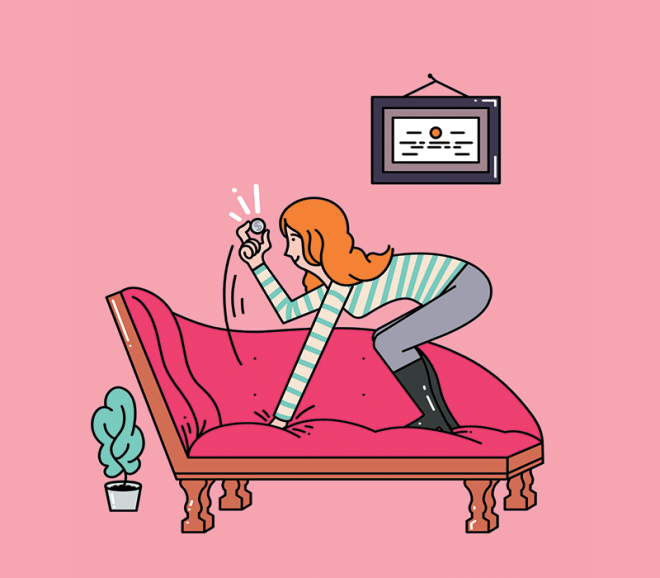 Marianne French barely remembers how she got from Red Deer, Alta., to her home in Airdrie, Alta., that night. She knows she pulled over at a gas station to clean the inside of her car and that she stopped on the shoulder to listen to a few songs on the stereo. She recalls that she was sipping from a mickey of vodka, and that she was sometimes driving at high speeds. But French doesn’t remember arriving at her home at 4:45 a.m. — eight hours after starting what is typically a 55-minute drive — with a gash in her arm and blood dripping onto her doorstep. Her partner, who spent hours that night worrying and wondering where she was, filled her in on the details after she recovered.

“I didn’t care if I lived or died,” French says of that dark time, when she was battling post-traumatic stress disorder rooted in the abuse she experienced as a child. On the days her children weren’t around, she barely had the strength to climb out of bed.

That night was a tipping point: After years of suffering, French finally sought out a psychotherapist, who’s helped her address suppressed memories, change painful patterns of behaviour and return to her job as a commercial painter. In many ways, it was a life-saving medical treatment — but one not covered by a public health care plan. “It’s absolutely worth it,” French says of the $130-per-hour sessions. “But we’re in debt up to our eyeballs because of it.”

According to the Mental Health Commission of Canada, one in five Canadians will face a mental health issue this year. (Chatelaine’s own survey of approximately 1,000 Canadian women aged 35–45 found that 34 percent have been officially diagnosed with depression or anxiety.) But despite mounting evidence that psychotherapy — the practice of treating mental illness or distress through intensive conversations — is an effective treatment for trauma, anxiety and depression, it’s not covered under any provincial health plan, and most employee benefits plans still include restrictive caps on how much a person can claim, and only for certain types of treatment.

The result, says Dr. Patrick Smith, a clinical psychologist and national CEO of the Canadian Mental Health Association (CMHA), is that people in crisis are often left sitting on long waiting lists for subsidized spots in small-scale programs, forced to pay out of pocket, like French, or never receive care at all. “Therapy is universally recognized as a gold standard of mental health care,” he says. “And it’s mostly unavailable in Canada — unless you can pay for it.”

Indeed, only one in three people who have suffered a mental health issue report having received treatment, according to Statistics Canada figures from 2003. And the effects are wide-reaching: A 2011 Mental Health Commission study estimates that mental illness costs the Canadian economy of nearly $50 billion a year in lost productivity and puts a strain on the overall health care system. “We know therapy is effective in improving recovery from depression, and, in some studies, it’s shown to be as effective as antidepressants,” says Dr. Catherine Zahn, president and CEO of the Centre for Addiction and Mental Health in Toronto. “But people don’t necessarily know these treatments work.”

Nor is it widely recognized just how critical good mental health is to physical well-being. A 2008 CMHA report found that people living with a serious mental illness are at a higher risk of developing a whole host of chronic physical conditions. As the World Health Organization framed it in a statement last year, “There is no health without mental health.” And yet the system remains overwhelmingly weighted toward dealing with people in crisis, Smith says. “We don’t wait until stage 4 cancer before we start to intervene,” he notes. “So why do we do that with mental health?” Zahn agrees: “Early intervention can prevent bigger problems down the line.”

In recent years, advocates have launched campaigns to help break down issues of stigma; now they’re turning toward access, wanting to widen the scope of funded care. And slowly, but surely, there are signs of a shift. “Therapy is not a frill,” says Zahn. “In the same way we have covered other interventions for non-psychiatric illnesses, therapy should be covered as well.”

Related: Imaginary friends can be helpful for kids. What about adults?

Corporations are slowing waking up to the idea that fostering mental health results in a more productive, less absent, workforce. JM Lavoie, assistant vice-president of Sun Life Financial’s group benefits product development team, notes that some employers are increasing the amount of therapy covered per year, for a broader range of treatment. (Most basic plans process claims only from a psychologist or social worker.)

And in October, Starbucks Canada made headlines for announcing it will cover $5,000 of therapy each year for full-time employees — up from $400. The company was widely lauded for supporting the mental well-being of its employees. But to Smith, it was a reminder of how the system has failed. “While that’s a good news story, it’s an extremely damning assessment of our universal health care system,” he says.

Over the past year, Smith, Zahn and their colleagues at the Mental Health Commission of Canada have been lobbying the federal government to include publicly funded psychotherapy in Canada’s new Health Accord.

In an open letter addressed to provincial health ministers in November, Zahn, Smith and Mental Health Commission of Canada president and CEO Louise Bradley said that while every province has a mental health strategy, “the time for strategies is long gone — it’s time for action.”

They want targeted mental health funding tied to measurable outcomes. They want investment in prevention and access to early intervention. And they are pushing for a commitment to publicly funded “structured psychotherapy,” which includes cognitive-behavioural therapy, proven to be particularly helpful to people suffering from depression or anxiety. “Without an infusion of new dollars, help for mental illness will remain a privilege, well outside the grasp of some of the most vulnerable populations,” the letter reads.

Zahn, who’s been at the forefront of this battle for years, says she was encouraged by the response. “The signals we’re getting are that this is something they’re seriously thinking about.” Talks with the provinces for the new Health Accord, however, broke down in December. But “the government remains committed to investments in this area,” and will look at different ways to improve mental health care, said federal health minister Jane Philpott’s press secretary Andrew MacKendrick. (Update: In early January, the federal government had struck deals with Saskatchewan, Nova Scotia, New Brunswick, Newfoundland and Labrador and all three territories for increased mental health care funding.)

Related: My concussion triggered a depression I never saw coming

For those fighting for change, it can’t come soon enough: Canada lags behind other developed countries, with only 7 percent of federal health care funding dedicated to mental health. “We’re about a decade behind other countries like Britain, Australia, Japan and Scandinavia” when it comes to providing publicly funded psychotherapy, says Dr. Saadia Hameed, a general practitioner in London, Ont., and an assistant professor at Western University, who also researches access to psychotherapy.

In Canada, Quebec is farther along than any other province in studying the issue. A 2015 report from an independent science-based health agency, the Institut national d’excellence en santé et en services sociaux, concluded that therapy is as effective as prescription drugs in treating depression and anxiety, and can even keep people from relapsing. But the government hasn’t yet rolled out a plan, likely because of the hefty price tag, says Rita Cavaliere of the Montreal-based group Coalition for Access to Psychotherapy. She says it would take an investment of at least $200 million to get a program like this off the ground in Quebec..

In addition to publicly funded care, access could be improved by adding psychotherapists, social workers, psychologists or counsellors trained in psychotherapy to pre-existing family health teams, says Hameed. “Individuals who have the experience of mental illness, despite all the advances through various anti-stigma campaigns, are still concerned about prejudice and discrimination they might bear if [their condition] were known,” Zahn adds.

It’s hard enough for a person to acknowledge he or she might benefit from help. But as this stigma against mental health conditions begins to wane, it’s important to have an accessible system in place. “It’s not like we don’t know what we need to do,” Smith says. “We know what we need. Now we need to offer it in our health care system.”

Related:
My life on the couch: Why I’ll always be in therapy
Four signs you’re depressed and how you can overcome it
What you need to know about 3 different types of therapy