The secret to longevity

What do most major life-threatening illnesses have in common? It's not genetics or lifestyle, but chronic inflammation 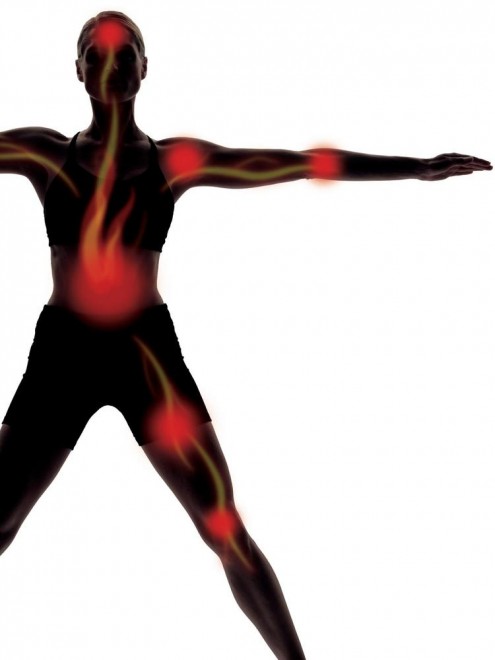 Women are strong. Our immune systems respond better to trauma than men’s and when we get sick we recover much faster (like you hadn’t noticed). This is because estrogen naturally produces more antibodies to fight off infection, whereas testosterone can trip up a man’s immunity and, sometimes, even block it. So next time your guy mewls over an infected splinter or a bad cold, before you roll your eyes, remember his biology makes him more vulnerable, poor lamb.

Of course, some researchers say there’s an obvious reason Mother Nature made women’s bodies stronger in the face of infection: It’s in our species’ best interest to keep females healthy because we’re the ones who produce children and typically take on the bulk of the work of raising them. Nothing lasts forever, though. As we get older, a woman’s resilient defences ebb or, in some cases, go into overdrive. And our immune system’s armies of antibodies can actually stage a coup, causing chronic inflammation. “This is one of the reasons a lot more women than men develop autoimmune conditions,” says DeLisa Fairweather, an assistant professor at the Johns Hopkins Bloomberg School of Public Health in Baltimore. “These are diseases—like lupus, Crohn’s, rheumatoid arthritis and diabetes —where the immune system attacks healthy cells.” In fact, current statistics suggest that women develop almost 80 percent of all inflammation- based autoimmune conditions—and that’s a conservative estimate.

Inflammation’s reach doesn’t stop at autoimmune disorders, however. Scientists stumbled upon a eureka moment in the 1980s when they discovered that chronic inflammation is the only common link between cancer, Alzheimer’s, Parkinson’s and heart disease, which is now the number-one killer of Canadian women. “For each death from breast cancer, several more women die due to cardiovascular disease,” says Jacques Genest, director of the cardiology division at the McGill University Health Centre in Montreal. What’s surprising is that many of these women, when tested, had normal cholesterol levels. Cardiovascular disease, scientists have realized, is not just a plumbing problem (like blocked arteries) but can also be the result of an internal inflammatory reaction.

When a good thing goes bad

You may be scratching your head thinking, But wait, isn’t inflammation a normal part of the body’s healing process? Isn’t that why an ankle swells when it’s sprained, or when you cut your finger opening a can of tuna, the skin around it turns red and warm? And yes, you’re right. A healthy body will quickly combat infection or injury by sending pro-inflammatory compounds to the area that make it hurt, swell and feel warm. Think of it as a message from your body that lets you know everything is working as it should. It automatically shuts off when the job is done—and the warm feeling disappears, the swelling goes down and you get on with your life.

Sometimes, however, the inflammation doesn’t shut off. Chronic inflammation can exist in our bodies without us even knowing. (That’s partly why Time magazine called it “the secret killer.”) Unlike, say, menopause, it has no obvious symptoms, like hot flashes, sweats or cranky outbursts. When researchers describe it as “the fires within” they’re referring to the way inflammatory proteins break down tissues and organs, like a flame turning wood into ashes—not to any perceptible changes in body temperature. In other words, chronic inflammation doesn’t usually make you want to jump up and open a window or fan yourself with a magazine . It’s a slow, silent crumbling of organs and deterioration of bodily functions (similar to metal rusting) that occurs when the immune system keeps unleashing inflammatory chemicals into the body. It is caused by things like poor diet, lack of exercise, high stress or a persistent bacterial infection, like gum disease (but more on that later).

When inflammation is chronic, many things can happen. Inflammatory chemicals that attack healthy cells in the gut lining year after year can cause lactose and gluten intolerance. When they wash over pancreatic tissue, diabetes may result. When they find their way inside joint tissues, rheumatoid arthritis can kick in. And when they bombard artery linings, it may lead to heart disease. Researchers also think that the brains of Alzheimer’s patients become inflamed—what’s referred to as “brain on fire”—before plaque accumulates between the nerve cells, gradually wiping out the patient’s memory. On the cancer front, studies show that the same hormones that turn up the inflammatory response in our bodies also stimulate cells to divide more frequently and increase malignancy risk.

The most exciting recent advance in the field of inflammation studies has been the division of research along gender lines. Up until about 10 years ago, most medical research used only male subjects in its studies. “There are remarkable differences between men and women that were ignored for way too long,” says Fairweather. “Now we’re starting to reinterpret everything and offer different treatments.” Fairweather points to statins, anti-inflammatory cholesterol-lowering drugs often prescribed to patients with heart disease. “Right now, these are prescribed more often for men than women,” she says. That’s partly because men typically have a greater risk of coronary heart disease than premenopausal women. But while the research is fairly new, statins are now being discussed as a possible treatment for chronic inflammation. And while chronic inflammation in women may start with an unbalanced immune system, it doesn’t stop there. Dramatic changes in our hormone levels during menopause intensify it. Estrogen has a dousing effect on inflammatory chemicals circulating in the body. But as we age and the hormone drops off , we lose an important gatekeeper in the fight against chronic inflammation. Differences in our bodies and neurobiology also mean that stress cuts a more destructive path in women than in men. Cortisol, a stress hormone, plays a direct role in turning up the flame and “women naturally have higher levels of it,” says Fairweather. Add to that our higher rate of sleep disturbances (which have been shown to trigger an inflammatory cascade) and you have two more culprits that are contributing to the growing list of reasons why women’s bodies are simmering in silence. Meanwhile, poor diet and a lack of exercise—which aren’t just a woman’s problem—can have a huge influence on how inflamed our bodies are on the inside.

What about a cure?

For years doctors prescribed baby Aspirin to lower chronic inflammation, saying it reduced the risk of heart disease and cancer and wiped away a few wrinkles. Even Dr. Oz told Oprah and her viewers to take two baby Aspirins a day back in 2008 as part of his “Anti-Aging Checklist.” But a growing number of doctors disagree with this advice. “Aspirin can cause internal bleeding,” says Genest. “And the risk may not outweigh the potential benefits.” Now the focus is on lifestyle, he says. “It’s about healthy food choices, exercise, avoiding smoking and finding ways to lower stress.” It’s been a long time coming, but, finally, traditional medicine is starting to embrace a preventive and more holistic approach to overall health and well-being.

To learn more about inflammation triggers and how to combat them, read this expert advice.