The secret to getting kids interested in active play

My kids are done with summer. They had a great one. We had wonderful weather, spent a lot of time swimming in a warm lake, they played outside with their friends a lot, we took walks and went for bike rides… 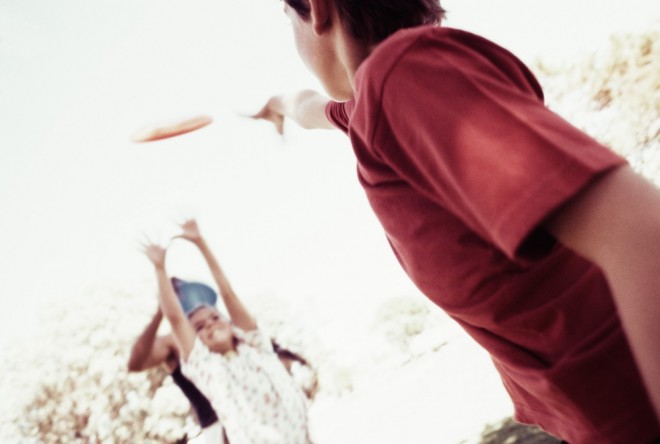 My kids are done with summer.

They had a great one. We had wonderful weather, spent a lot of time swimming in a warm lake, they played outside with their friends a lot, we took walks and went for bike rides…

But even in early October we’re still having great weather in Calgary. And now my kids seem summered out. After a few weeks of school they’ve been lazing around (video games – ack!) during the weekends more than I like. Last week I finally convinced my 11-year-old daughter to go outside and play Frisbee with me for a little while.

And she was terrible. She could neither catch nor throw and she wanted to quit after a few minutes. “Daddy, it’s too hot. I suck at this. Can I go back inside?” Yes, my little girl says, “suck.” Are you surprised?

And then I got an idea, “Let’s see how many in a row we can get.” And that changed everything, it became a competition and she focused. We were both intent on good throws and catching everything humanly possible. We chased after that Frisbee and made some awesome catches. If we missed one, we started over immediately to try to break our previous record.

After a while we needed to go in for a drink and she said to her older brother, “We got 68 in a row!”

We’ve been playing quite a bit of Frisbee since then. By mixing in an element of competition and by tracking improvements, it was motivating not just to do it, but to focus on doing it well. There’s science behind this technique, by the way. People who have a race planned train harder and are more dedicated than those who just take up running, and people who track their progress have a higher adherence rate to exercise than those who don’t.

My son will be choked if I don’t say that he beat his sister’s record. It took a few days, but he hit 119.

Learn how METABOLISM really works. Get a FREE report from James here.