The one thing you should never ask your man to share

“What are you thinking about?” Those are the words every man dreads, because the completely truthful answer is usually one women don’t want to accept: “Nothing.” 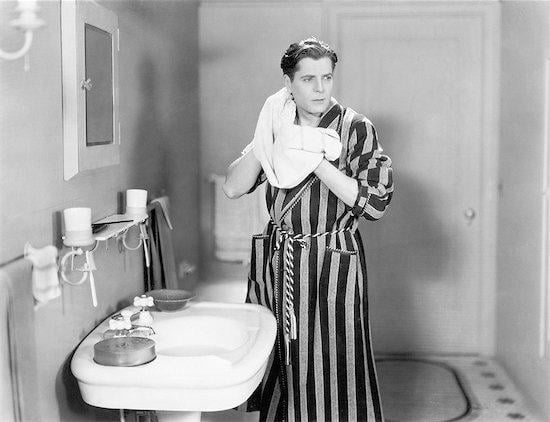 “What are you thinking about?” Those are the words every man dreads, because the completely truthful answer is usually one women don’t want to accept: “Nothing.”

That’s not what I’m talking about in the post, however. You should ask your man to share his feelings. You might stave off a stress-induced heart attack.

My wife can wear any item of my clothing she likes; she’ll get no complaints from me. She borrows my bike, and if I need her van she drives my car. We’ll share computers, and I’ll occasionally even hand over the TV remote.

There is one thing that is off limits, though: My razor.

We’ve been together for 22 years and have two kids together, so this isn’t a contagion phobia. It’s just icky.

This post recommended using his razor for some reason, and this one alleviates concerns about sanitation. Again, I have no concerns about catching anything from my wife, I just don’t want her using it. Anything else she wants to use is fine, but hands off my razor.

This became a recent issue because we were in Disney World — at a hotel with a pool, so bathing suits were frequently worn — and she realized we didn’t have enough blades. We both use the same kind — she’s not one for the expensive lady-type things, so we both use Mach 3 blades and buy them in big packages at Costco.

I had a blade that would see me through the vacation no problem, but she needed a new one. I didn’t even give her the opportunity to ask. “We’re running low on milk,” I said quickly. “I’ll pick up more blades at the store.”

(One thing weird I noticed: Even compared to the small package sizes that you can buy at a pharmacy in Calgary, they were about 50 percent more expensive at the large pharmacy in Orlando. Weird, because so many other things cost much less there, like beer.)

Anyway, I avoided her asking to use my razor and making things awkward. I didn’t even remotely balk at what I thought was an outrageous price for the blades. It was worth it.

Am I the only one who feels this way? No.

I called a couple of friends. The first one I asked if he’d let his girlfriend use his razor. “Not a chance,” he said. Another friend I asked, “How would you feel about your razor going from your wife’s armpit to your face?” He replied with, “That would not be cool.”

I learned about one woman who thought it was her undeniable right to use her boyfriend’s razor. When he said no and tried to hide it, she hit him with a frying pan. I’d say their relationship issues run deeper than razor sharing, however.

Perhaps you already borrow his and he acts like it’s no big deal. My guess is that he is indeed acting, because it is a big deal. In reality, when you use his razor, he’s dying inside — well, perhaps not dying, but definitely cringing.

Why? Well, it’s more than being “icky” and more than going from your armpit to his face. Face shaving is a male right of passage; usually our dads teach us to do it. What’s more, when I shave, I’m taking an incredibly sharp implement to my face, and the face is where you live, in many respects. Every time I step up to the mirror I’m silently praying to the shaving gods that I not cleave off a sizeable chunk of skin in that sensitive spot right under my nose.

So maybe having a woman — hell, anyone other than ME — use my razor messes with the whole Zen mindset of this daily ritual. But I’ve heard numerous complaints that it feels as though a blade that goes from a woman’s legs to a man’s face feels like shaving with barbed wire and iodine.

So please, just ask us to go out in a -30C snowstorm to buy you more blades instead. We’d rather do that.