Take control of your body with The 4-Hour Body

Tim Ferriss is a man on a mission — several missions, actually. Readers were first introduced to him through his last book, The 4-Hour Workweek, which focused on his effort to avoid the corporate world and its typical restrictions. His newest effort, The 4-Hour Body, covers Ferriss' attempts to hack the human body. 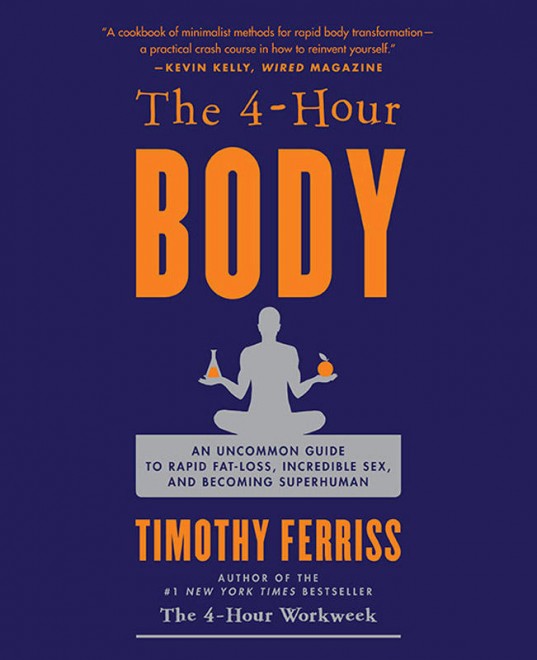 Tim Ferriss is a man on a mission — several missions, actually. Readers were first introduced to him through his last book, The 4-Hour Workweek, which focused on his effort to avoid the corporate world and its typical restrictions. His newest effort, The 4-Hour Body, covers Ferriss’ attempts to hack the human body.

The author can’t be accused of skimping on his research. Ferriss makes himself a guinea pig throughout, and in some cases — like when he undergoes scores of blood tests — you’ll be glad it’s him and not you. Some of the advice in this book is rather extreme, like gorging on food one day a week or taking ice baths to increase fat loss. But other advice fits more easily into the average life and could give you an edge in weight loss and muscle-building.

Here are five tips, taken from The 4-Hour Body, that you can try in order to ramp up your diet and fitness routine:

2. Get measured: When you start your wellness plan, measure yourself around your upper arms, waist, hips and thighs. Get your body fat tested as well, or estimate it (Ferriss provides a pictoral guide for estimates in the book). Record the measurements. These numbers, and the changes in them, will often be more meaningful than the one on the scale, because they’ll reflect changes in body composition overall — muscle weighs more than fat, for example, but it’s more compact too.

3. Avoid white carbs: You’ve heard this one before, but for good reason: these carbs get digested quickly, making your blood sugar spike and affecting insulin resistance over the long term. For Ferriss, this rule includes food that could be white — no white or brown rice, for example.

4. Give yourself a dietary day off: You don’t need to gorge yourself to the point of illness, but having one day a week where you know you can eat something if you truly want it can help you stay on track for the other six days. If you decide that you can have a chocolate bar on Saturday, for example, it’s a bit easier to avoid eating one on Wednesday — and often, the craving will have passed by the time your “cheat” day comes around.

5. Work your muscles to failure: Weight training is important for a lot of reasons, but you’re probably not doing yourself any good if you’re just lazily lifting a few two-pound weights for 12 reps. If you’re targeting 12 reps, as an example, choose a weight where lifting the 13th rep with good form will be impossible. You can find more detail on this in the above link, but it ensures that you’re really working your muscles as you intend to and building strength and endurance.