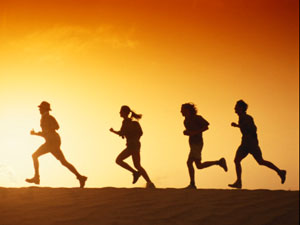 As the sun begins to rise, I crawl to a nearby park and start running. Then there are pushups, more running, then sit-ups. “Does anyone feel like being sick?” yells the drill sergeant. Well, actually, yes, I think to myself – but it’s more likely due to the 5 a.m. wakeup call than the actual physical activity, which while extremely challenging, has yet to induce nausea. Over the course of the next hour we sprint, stretch and do every abdominal exercise known to man because it’s “core day.” Looking at your watch to see when the pain will end is an offense punishable by pushups. So is going to the bathroom. This is boot camp. But there was no draft.

What did I get myself into?

I’m among 15 or so go-getters of all weights and sizes who have forsaken sleep to have their butts whipped into shape at the crack of dawn.

This type of fitness boot camp is an increasingly popular workout regime, which boasts better bodies with basic techniques. Most boot camp programs operate in public parks, usually in the early morning, and involve a one-hour commitment, five days a week for a month.

“What people are buying into here is a scheduled program – 20 days of commitment. Anybody can go to a gym and buy a pass, but the rest of it is relying totally on you. You could do aerobic classes, where you just show up and follow the leader, but in boot camp class we know your name, we know who you are, what your strengths are, what your weaknesses are and we directly motivate you and encourage you,” says Fred Masse, co-founder of Survivor BootCamp, which offers programs in British Columbia, Alberta and Ontario.

Jason P. Brown, owner and operator of Adventure Boot Camp in Winnipeg, Man., says his classes offer a supportive atmosphere. “I do push everyone that’s in the group, but I give them encouragement. I find that’s more effective than being in their faces all the time and yelling at them. A lot of it is really being encouraging and offering support,” he explains.

As someone who is not particularly inclined to exercise on a regular basis, I was definitely a wee bit apprehensive about enrolling in boot camp. However, visions of Full Metal Jacket-style army torture techniques quickly faded when I met Jacquie, my group’s drill sergeant, who I was sure was paying attention to each and every one of us when she took the time to poke fun at my mismatched socks. “We tell our trainers that there shouldn’t be any yelling or screaming. We want them to be helpful, upbeat and energetic. That being said, I’m kind of bossy when I run my classes because people show up to be told what to do for the hour. It’s the understanding that they want an intense workout so we’re not going to sugar-coat things,” Masse says.

What you can expect

The boot camp plan focuses on basic cardio exercises, like sprints and longer runs, and typical toning techniques such as bicep curls, lunges, sit-ups and pushups. The idea is for everyone to go at her own pace. “I try to have it where each day of the week there is a different muscle group that’s being worked. I also try to make sure that all of the ladies are being challenged in a variety of different ways of training the body,” says Brown. “We go through a lot of different exercises throughout a one-hour session. From medicine ball drills to short distance runs to long runs, so we pack in as much exercise as we can within the hour.”

“In my program I split it up into upper and lower body and cardio days,” says Masse. “On an upper body day we’d do a lot of drills involving pushups and crunches and those sorts of things. Then we do a heavy routine with weights and go for a run for 20 to 25 minutes. I have one day where we just do core exercises. Then there’s leg days dedicated to running drills and lots of squats and lunges with weights and then maybe some ultimate Frisbee. Friday we do everything – a full body workout.”

The variety included in the workouts and the personal attention from trainers are definitely two big reasons for the rise in the popularity of boot camps across Canada, but the key selling factor could be that practically anyone can join. “We get people from all over the board,” says Masse. “I’d say it’s mostly women and there are different fitness levels. I see people from all over. I see housewives who’ve had a couple of babies…then I have some people that are total athletes. They’re all in the same class together and there are different alternatives and options for those people that aren’t quite as strong. But if I have someone in my class that I know is really strong I get them to do harder exercises than everybody else. We do a lot of timed sets so it doesn’t matter where you are physically because you’re going to do what you can in that minute at your ability,” he adds.

As far as payoffs go, boot camp programs are synonymous with quantifiable results. “Specifically the goal is weight loss,” says Brown. “Some participants will be getting ready for a particular special event like a wedding or a reunion and they just want to lose that extra ten pounds. Boot camp seems to work really well for them because they can get their exercise in early in the day,” he adds. Both Masse and Brown say they see a lot of clients returning month after month. “Most people will see changes in a month and if they want to continue to see changes they stick around,” says Masse.

Before my boot camp experience the idea of getting up at dawn to work out was right up there with the thought of going for a root canal. A week into the program I changed my mind. The feeling of having accomplished something healthy before the rest of the world wakes up is highly gratifying. On top of that, embracing the life of an army recruit for an hour each morning is a good way to justify big breakfasts.

Find a fitness boot camp near you: