I spent an hour in the pool this morning, swimming laps. Since January, I've been swimming twice a week, arriving at the pool when it opens. You might imagine the pool to be a quiet place at 5:45 in the morning, but there are a dedicated number of regulars who take pleasure in starting their day with a swim. 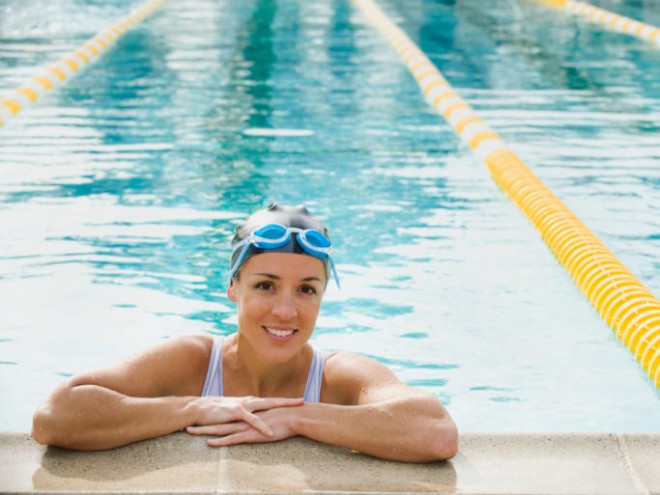 I spent an hour in the pool this morning, swimming laps. Since January, I’ve been swimming twice a week, arriving at the pool when it opens. You might imagine the pool to be a quiet place at 5:45 in the morning, but there are a dedicated number of regulars who take pleasure in starting their day with a swim.

Some mornings, I’m among them. And other mornings, like this one, the pleasure is harder to find.

When I began training for a triathlon, there was one daunting barrier in the way: I’d never learned how to swim. It took effort to transform my doggie-paddle into an effective front crawl, and more effort again to train myself to breathe smoothly out of alternate sides, every three strokes, but the work paid off: I can now call myself a swimmer.

Except there are mornings, like today, when doubt overwhelms. These are the mornings when my goggles fill with water, my breathing gets panicky, and I lose my stroke and think: what’s going to happen to me during the race, in a lake, surrounded by other competitors? Do I really know how to swim? Or am I just fooling myself?

Being under the water is like being in another world. It takes some getting used to. When it’s going well, the breathing and the stroke is rhythmic and controlled. Many mornings, I drift into a meditative state as I swim back and forth and back and forth. But on other mornings, like this one, being alone with my thoughts is a struggle. I mentally critique every flaw in my technique. It’s hard to remind myself that I’m already doing the most important thing: simply showing up.

I remember that first morning, last January, when I went to the pool, suited up, and headed for the lanes. I was completely terrified. I stopped a lifeguard and confessed that I wasn’t a strong swimmer (please keep your eye on me, was the subtext). What a thrill it was to discover myself capable of swimming back and forth — with lots of rest breaks at the ends — for a whole hour. Over time, the rest breaks grew less frequent, until I could swim almost constantly for the full hour. My distance increased too, from less than 1000 metres that first day, to the 2500 metres I now regularly swim.

So, why the fear?

I don’t know whether all swimmers experience similar moments of panic and doubt, but the pool has been a place of difficult self-discovery, for me. On the up side, I’ve gained confidence. I’m proud to have learned a new skill at a relatively late age, and it makes me wonder, with excitement: what else could I learn? But on the down side, I’ve had to confront negative thinking and anxiety — my own.

A buried memory surfaced during an early lane swim: I recalled a near-drowning experience in an unsupervised backyard pool that was crowded with kids. I was about six years old and floating in a device meant to keep me from sinking; instead, it flipped over and pinned me upside-down, underneath the water. My mother, who was at some distance, intuitively knew that something was wrong: she ran and pulled me out of the water. I’d already breathed in a lungful. Recalling this moment, while swimming laps, was visceral, and gave me insight into the fear I continue to fight, on occasion, under the water.

I sense my own weakness and vulnerability, here. I am out of my element, quite literally.

I have the ability to swim — I do. But what’s taking the most practice, and demanding the hardest effort, is learning how to overcome doubt, sometimes on a minute-by-minute basis: how to keep showing up; how to believe in my abilities; how to keep myself, mind and body, afloat. In the race, in the lake, surrounded by other swimmers, that’s what is going to matter most.