How sleep deprivation affects your body

A head-to-toe look at the hits your body takes when you forfeit those precious zzzs. 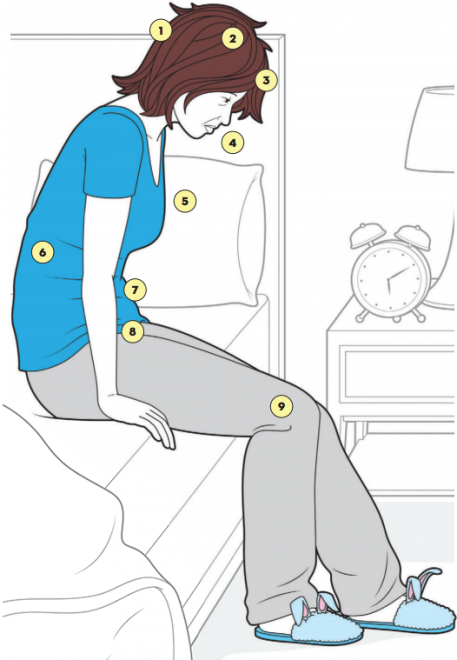 Yes, decision-making and concentration abilities go kaput when we don’t sleep enough, but researchers at the University College London MedicalSchool now say that sleeping too little can also age your brain by seven years.

A 2014 study in Psychological Science says just one night of disturbed sleep can cause major distortions in memory.

According to new research in Sleep, common giveaways of a restless night include droopy, swollen red eyes; pale, wrinkly skin; and an aura of sadness.

Researchers at the University of Helsinki say insufficient sleep ramps up your body’s inflammatory response and compromises your immune system.

Up late last night? Think of your cells! Scientists at the Medical College of Wisconsin have linked sleep loss with cell damage, particularly in the liver, lungs and small intestine.

Forget potato chips — that snug waistband may be due to sleep deprivation. A recent study in the American Journal of Human Biology says lack of sleep inhibits the hormones that regulate our appetites and increases our risk of obesity.

Research in the Journal of Sexual Medicine shows women with sleep apnea (when your breathing repeatedly stops and starts) have higher rates of sexual dysfunction. Meanwhile, a recent study by researchers in theU.S. shows women who sleep an extra hour are 14 percent more likely to havesex the next day.

Poor sleepers have a heightened sensitivity to pain, says a recent study in the journal Pain. Ouch!