I've Had Skin Cancer—Over And Over Again

My grandfather died of melanoma. My dad has had skin cancer, too. This year alone I’ve had removal surgery five times—but first I had to find a doctor who took me seriously 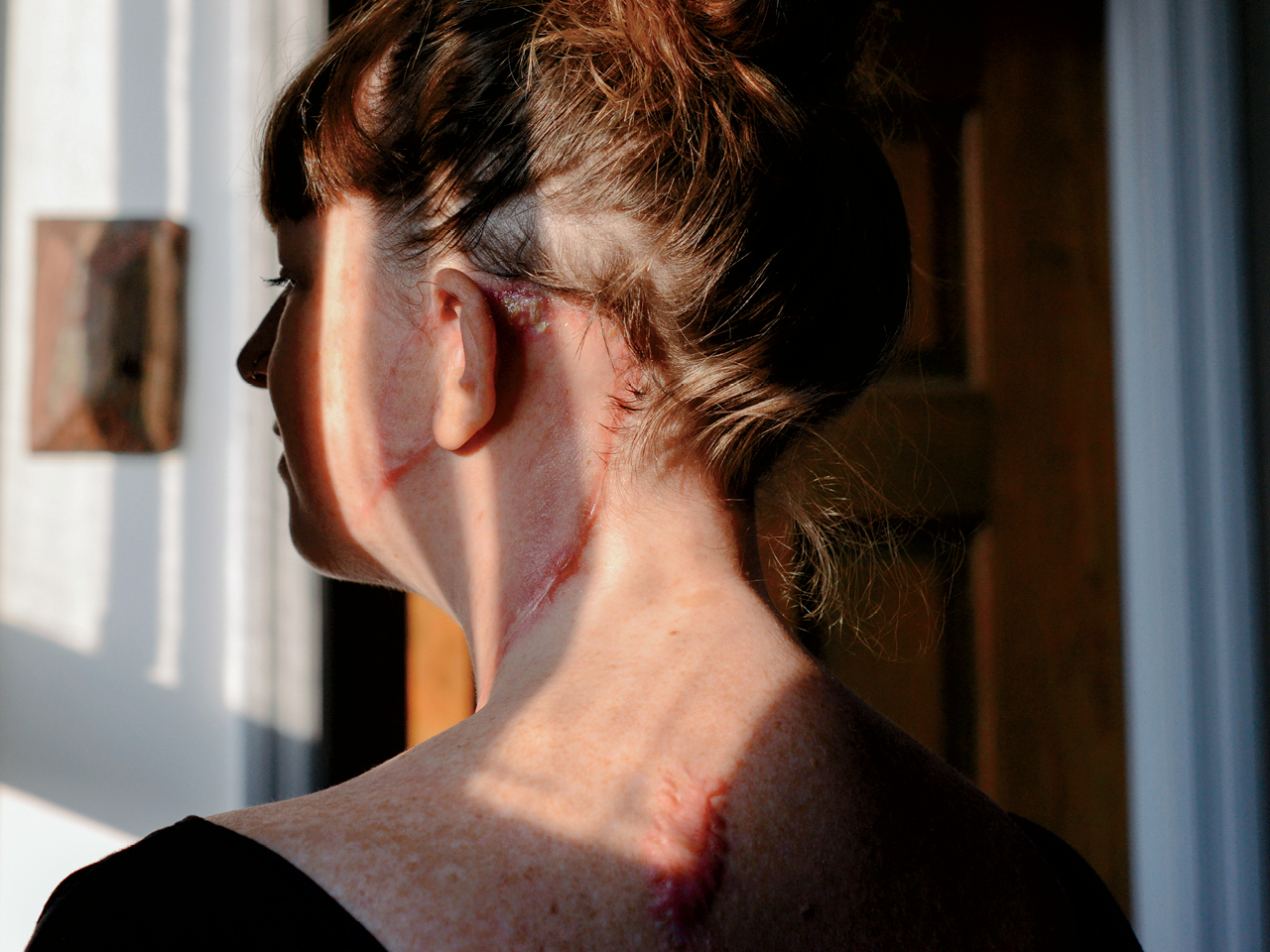 Among the digitized mementos that are precious to me is a black-and-white photograph of my paternal grandfather, Rodney, as a young man. The picture is undated, but he looks to be in his late teens or early 20s. He’s sitting on a beach in Sydney, Australia, where he grew up; his hair is damp from the seawater, and the sun is illuminating the left side of his body as he rests his arms on his knees. The way he is glancing up and smiling at the camera reminds me of one of my brothers—whom he never got a chance to meet.

The photograph breaks my heart. Rodney would go on to marry my grandmother, fight in World War II, become a father, and then die of melanoma at the age of 34, before my dad’s second birthday. As such, he’s always been frozen in time to me: sitting there, basking in the sunlight on that beach or, in other photos, sitting smartly beside my grandmother in his uniform.

Since I never knew him, the melanoma that killed him came to be one of the few scraps of information that defined him for me; a fact that would echo around in my head whenever I was exposed to the sun for too long, got a bad burn or forgot to wear a hat. The echoes started to resonate deeper when skin cancer touched my own life.

Of these, BCCs are the most common but very rarely metastasize, while SCCs have a higher risk of doing so, usually starting in the lymph nodes. Melanoma is the most likely to spread, which makes it the most dangerous. And the Canadian Cancer Society (CCS) reports that melanoma cases in men and women are increasing at a rate of two percent per year across the country.

According to projections for 2020, “we are expecting 8,000 Canadians to be diagnosed [with melanoma],” says Elizabeth Holmes, manager, health policy at the CCS. This is up from the 2019 estimate of 7,800 total cases: This year, men are projected to account for 4,400 cases and women for 3,600 cases. Holmes says that while 65 percent of melanoma cases are usually due to UV sun exposure or tanning beds, people with a lot of moles on their body can also be at risk.

I’m of Irish-Australian heritage and was born and raised in Hong Kong, where I had a lot of sun exposure as a kid. My freckles came in when I was about three. The diagnosis of a few BCCs in my late 20s shouldn’t have come as a surprise: Although my grandmother had taken my dad to have every mole on his body removed after Rodney’s death, he’s still spent most of his adult life dealing with BCCs and SCCs.

After I noticed some strange patches and bumps around my face and hairline, a dermatologist prescribed me topical creams like Aldara and Efudex: Over a period of a few weeks, the cream stimulates the body’s immune response to fight the cancercells, resulting in some rather red and angry-looking scabs, often much larger than the initial cancer.

But it’s remarkable how the skin can bounce back without any real trace of what was there before, and it’s probably because it seemed so easy to get rid of them that I became too relaxed about following up properly as other suspicious patches appeared over time. I recently found out the hard way that given enough time, BCCs can recur, grow considerably and require significant surgical intervention to remove and reconstruct the area. 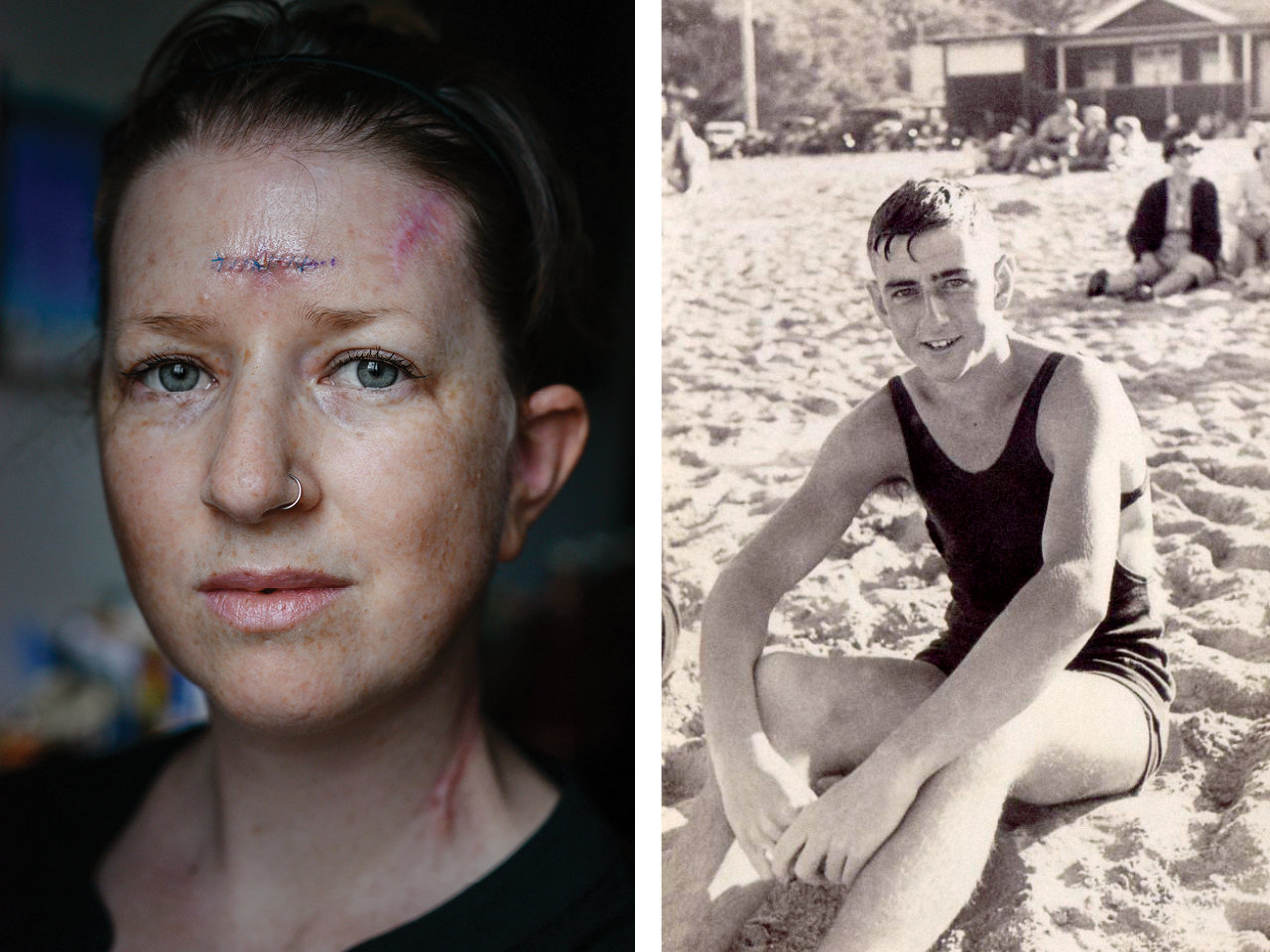 Lauren Crothers has had five carcinomas removed over the past year alone. On the right is her grandfather Rodney, who died of skin cancer when her dad was just two years old.

Over the past year alone, I’ve had five surgeries to remove carcinomas on my back, forehead, scalp and left ear. These are called Mohs surgeries, a procedure in which layers of skin are cut out in stages and tested, until all the cancer is gone. My ear alone took eight stages over a 10-hour period, then needed to be reconstructed with two additional surgeries in the months following. In August, the removal of a large BCC behind my ear and closure of the site required the skin on my neck to be opened up, grafts taken, and then lifted and stretched over the affected area.

My mistake was in letting four years pass without a skin check. By the summer of 2019, now living in the U.S., I could no longer suppress my anxiety about the patches slowly growing in different spots around my ear and forehead. I visited a dermatologist who biopsied my forehead and back but stalled on testing my ear tissue because she was convinced the patch there was psoriasis. Two visits later, after a lot of pushing on my part, I found out that a BCC had burrowed so deep into my ear canal that my ear will never look the same. This process has taught me that not only is it important to get regular skin checks but also to push hard if your gut is telling you that something is wrong.

Recently, another patch behind my ear was growing redder, angrier and more painful over time. Twice I asked about it, and twice I was told it definitely wasn’t a skin cancer; that it was psoriasis. The treatment I was prescribed for psoriasis never really did anything. So, as soon as pandemic restrictions eased, I decided to switch gears. I found a new dermatologist, who immediately biopsied the site, along with another one. Both came back as BCCs.

I’ve learned that it is important to advocate for yourself, that even the smallest-looking abnormalities can end up involving a much larger surface area when it comes to stitches and surgeries. Had I been correctly diagnosed a year ago, perhaps the most recent surgery wouldn’t have been as intense. I will never know.

I’ll also never pretend again that sun safety isn’t a year-round priority. “In winter, the UV index can be lower, but [the rays] still are out there in the sunshine and can reflect off snow, water and concrete surfaces,” says Holmes of the CCS. Sunscreen and sunglasses are always important, particularly on days when the index—which rates UV intensity on a scale of zero to 11—is greater than three.

Dr. Davindra Singh, founder and lead dermatologist at AvantDerm in Toronto, says that both UVA and UVB can cause skin cancer. “Ultraviolet A is present year-round, can penetrate clouds, window glass and car glass. For this reason, I always advocate for wearing sunscreen every day… rain or shine, winter or summer,” he says.

I’m blue-eyed, fair and deeply freckled, and have a reddish tinge to my brown hair—my Mohs surgeon once told me that “the Irish are God’s gift to dermatology.” But since dermatologists recommend an SPF factor of 30 or higher, everyone needs sunscreen.

And while it’s true that racialized people are less likely to develop skin cancer, Singh says that they are actually more likely to die from it. “Studies show that they receive little or no education from their doctors concerning the risks and prevention of skin cancer,” he says. That results in “a lack of awareness of what to watch for, delays in diagnosis leading to discovery at more advanced stages, lack of access to timely treatments and lack of educational resources aimed at patients and medical professionals.”

There are steps being taken to make medical literature on dermatology more inclusive: Earlier this year, London-based Zimbabwean medical student Malone Mukwende authored a new textbook on diagnosing different skin conditions, including skin cancers, in people with darker skin tones. There are also newer sunscreens designed to leave little or no chalky residue on darker skin.

Melanoma can appear in places you’d least expect, such as on nail beds, eyes or in the genital area, which is why one in-depth, whole-body skin check is recommended per year, for everyone. The type of melanoma that killed Bob Marley at only 36 began under one of his toenails.

In the meantime, one of the best ways to keep an eye out for suspected melanoma is to follow the ABCDE guide to monitor any changes in your moles: asymmetry, border (irregular or uneven), colour change, diameter (over six mm), or evolving shape are all reasons to be checked out.

“It is harder to detect these changes in people of colour,” says Singh, but adds that ultimately we all need to be aware of our skin.

Early detection can make a huge difference in outcomes. According to the CCS, the five-year survival rate for melanoma in Canada is 88 percent. Back in the 1940s, my grandfather Rodney wasn’t so lucky. His melanoma started in a mole behind his left ear, but by the time he noticed and had it removed, it was too late. I thought of him while the exact same spot on my body was being cut open, cauterized and sewn back up at the end of August.

As someone who has always been hypercritical of my appearance—and my profile, in particular—dealing with scarring and bruising has been a challenge. When my forehead was done, I had significant swelling and bruising around my eyes for several days. My left ear now sits lower than my right and sticks out a bit. I’m missing a chunk of my hairline.

The experiences of disfigurement I’ve had are reminders that ignoring skin changes isn’t worth it, and that it’s okay to push for a second opinion or a biopsy if you feel like suspicious areas need a closer look.

I do notice the looks I get. I was afraid people would think I had been beat up, and I was asked once if I’d been in a car crash. I took it as an opportunity to talk about regular skin checks and early detection. I made a decision to be public about my own issues with skin cancer to get the conversation going. The number of people
who’ve contacted me privately to say that they went on to book a skin check is the ultimate payoff; one friend says she ended up having a precancerous spot frozen off the end of her nose after seeing one of my posts and booking an appointment.

I might never feel quite as confident in an updo as before, but I keep telling myself that skin is a beautiful thing, and its ability to heal over time is astounding. I will never be scar-free, but that is okay—and far better than allowing a BCC to settle in, given their ability to destroy bone and tissue, let alone a more aggressive SCC or rapidly spreading melanoma.

“It’s important to know your skin,” Holmes says. “You live in it every day.” In my grandfather’s memory, I will forever be on guard.