A 1-minute workout for real? What you need to know about micro-workouts

Can short bursts of activity really be as effective as long ones? Here's what the research says. 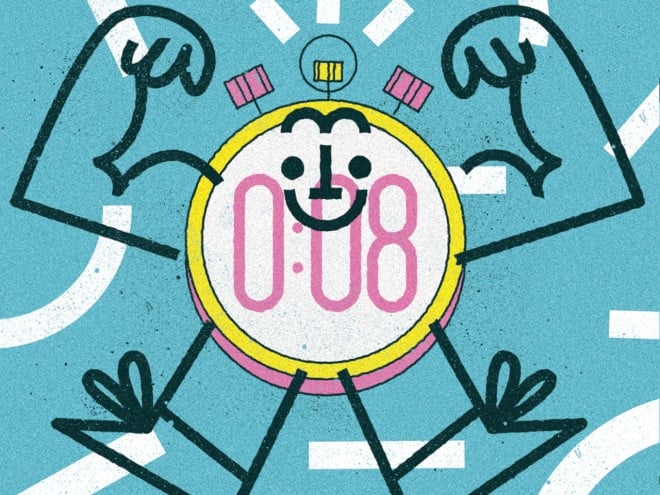 There’s some glorious research out there that suggests short workouts aren’t only better than no workouts, they might be every bit as effective as long ones. Here, a look at the studies.

Weekend warriors
Is it worth working out if you do it only two days a week? According to a JAMA Internal Medicine study published earlier this year, the answer is yes. Researchers looked at 63,591 people from Scotland and England from 1994 to 2012 and found that people who crammed the recommended 150 minutes of weekly exercise into two days a week were 30 percent less likely to die during the study period, compared with people who didn’t exercise at all.

The Catch: The study was observational, so it proves a correlation, not causation. There may also be other factors at play, such as diet and lifestyle. Also, 90 percent of the participants were white, so the results were not derived from a diverse population.

60 seconds of cycling
A 2016 study spanning 12 weeks at McMaster University in Hamilton, Ont., found that a single minute of intense cycling had similar health benefits to 45 minutes of continuous moderate cycling. Participants warmed up by cycling at a moderate pace for two minutes and then sprinted for 20 seconds. They repeated that two more times and then cooled down for three minutes (totalling 10 minutes on the bike). Researchers found that exercising this way three times a week was as effective for improving cardiorespiratory fitness and insulin sensitivity as 135 minutes of moderate cycling (plus 15 minutes of warm-up and cool-down) a week.

The Catch: This study looked at only 27 participants — all of whom were men.

Reverse cellular aging with HIIT
High-intensity interval training — a workout that involves short bursts of intense activity interspersed with rest periods — is more effective than weight- lifting in reversing aging at the cellular level, says a study published in March in the journal Cell Metabolism. Researchers from the Mayo Clinic found that doing four sets of hard cycling for four minutes followed by easy cycling for three minutes, three times a week for 12 weeks, significantly improved blood sugar levels, gene activity and the health of mitochondria, which produce energy, in muscle cells.

The Catch: The benefits were greatest for the over-65 group.

Head upstairs
In studies published in February in Medicine & Science in Sports & Exercise, McMaster researchers found that quick, short bursts of vigorous stair climbing can help heart health. In the first study, participants did three 20-second “all-out” bouts of sprinting upstairs with two minutes of recovery in between and three minutes of cool down, three times a week for six weeks. In the second study, participants climbed the stairs for one full minute, three times, in a “vigorous” manner (intensely, but not all out), and had their recovery intervals reduced to one minute. In both studies the routines took about 30 minutes a week total to complete and significantly increased the car- diorespiratory fitness of participants.

The Catch: The study is another small one, looking at 31 participants (all women) described as“sedentary.”