Your computer or mine? 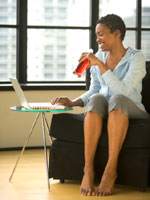 “There are no interesting, attractive, available men in Toronto – not my type anyway,” says Calgary native Erin Street*, 30, of her experience in the urban dating jungle. In a valiant attempt to track down a decent guy, Street, a film production assistant, joined thousands of hip young women and launched herself into the online dating world. Her profile, she says, went a little something like this: “Things that make me think: J.P. Witkin, math, my friends, this stupid profile…there’s more, just ask.” But after eight months of dating men who weren’t quite right, Street never got the response she was looking for. “I truly and honestly longed for somebody to take the time to google J.P. Witkin and begin a conversation on it,” she says. “But nobody ever did.”

If you’re an Internet-savvy single gal, there’s a good chance you’ve attempted to write your own dating profile. Canada’s top dating site, Lavalife.com, boasts 600,000 active members, a number that’s growing by the thousands every day. Online dating is a numbers game, and the trick is getting your profile to stand out from the crowd, says Lori Miller, Lavalife’s singles and dating expert. Easier said than done. Summing up your very existence in 2,000 characters or less can be a daunting task, and if references to 1960s surrealist photographers (J.P. Witkin for the Google-challenged) won’t make you click-worthy, what will? Worry not, fearless dater – we’ve taken the guesswork out of profile writing. Just bookmark our tips and you’ll be getting winks, smiles and messages in no time.

It’s tempting to fudge the details when you’re sitting behind your computer screen. Sure, you could shave a few years off your age or call your eyes hazel because it sounds more exotic than brown, but if you eventually decide to meet JohnnyLove28, he’ll find out about your fibbing. “Right off the bat you’ve lost on two fronts,” says Rhonda Lenton, co-author of a study funded by Msn.ca on Internet-dating patterns in Canada. “You’ve basically told him that you’re prepared to lie, and you’ve misrepresented what he was expecting.” Lying about your age, weight, whether or not you have kids or posting a false photo are major deal breakers. Lenton, now a dean at Toronto’s York University, says participants in her study listed dishonesty as the number one disadvantage to dating online. Even fudging the small stuff may work against you – list sushi as your favourite food even though it grosses you out and you just might end up choking down raw blowfish on your first date. Save yourself a lot of time and heartache by being truthful with every aspect of your profile – your honesty just might be endearing to some lucky fella.

As your mother used to say, it takes all kinds – and nowhere is that more true than in the wacky world of online dating. Not everyone is in the market to find true love. “You really have to sit down with yourself and say, ‘Here’s my wish list and here are some things that are just deal breakers,'” says Ruth Claramunt, a traditional matchmaker in Toronto and Vancouver. Let other daters know what makes you tick by the way you describe yourself in your profile. If kissing a nicotine fiend turns your stomach, describe yourself as a non-smoker. If you can’t see yourself with a couch potato, write about crossing the finish line in your first marathon. And if you’re looking for something serious, don’t post your profile in the “dating” and “intimate encounter” sections – be clear about what you want. That’s how Megan Gold*, 28, found her husband on the Jewish dating site, JDate. “He liked the fact that we were both looking for the same thing – a serious relationship, not just a fling or dating,” says the Toronto-based teacher.

“Your stories are what make you unique,” says Evan Marc Katz, a California-based online dating coach. “What’s more interesting, the person who says, ‘I drank sangria on Las Ramblas in Barcelona’ or the person who says, ‘I like to travel’?” Touché, Mr. Dating Coach, everyone is interested in sangria. To make sure your profile jumps out at the man of your dreams, Katz recommends turning adjectives into anecdotes. Instead of just saying you’re spontaneous, describe the time you threw a dart at a map and drove to the town you hit. “What you’re doing is providing reasons for people to talk to you online. You’re trying to hook people,” he says.

Claramunt suggests taking the intimate details one step further by revealing something very personal about your values. “Just be open about who you are, it makes you much more approachable,” she says. Let the guys know if you’re ready for commitment, that you’d step in front of a train for your daughter or that your mom is your best friend.

It’s great that you’re excited to launch your profile into cyberspace, but if you’re not willing to do the work, you might as well shut down the computer and go watch reruns of 90210. “Ask anybody if love is as important as work and they’ll tell you yes,” says Katz. “But why don’t people spend as much time on their online profiles as they do on their resumés?” As with any project, your first step in the profile-writing process should be research. Go to your site of choice and search through the women daters to see what photos, content and opening lines catch your eye. “Right away you’re going to get a good idea of what’s a great profile – and what’s not,” says Miller. Her picks for outstanding opening lines on Lavalife: “I enjoy colouring outside the lines” and “Hurry, sale ends today.” For you left brainers who have trouble accessing the creative side, just filch the best lines from your favourite movie or book – you might catch the eye of a fellow fan.

Finally, when in doubt, Claramunt suggests getting a second opinion. Show your profile to a trusted friend and ask if it accurately captures your personality. “Having an objective opinion can be really helpful,” she says. While you’re at it, have your friend read for typos because, just as in school, spelling counts. “A typo could stop someone from reading your profile any further,” says Miller. She suggests typing out your personal message on a Word document before pasting it onto your site, as Lavalife doesn’t have a spell-check option.

You catch more flies with honey…

That old chestnut might challenge your gag reflex, but writing a cynical profile will get you nowhere fast. “I’m looking at someone on a website right now. Her name is No Psychos Please, says Katz during our phone interview. “If she were my client I’d say, ‘Why don’t you get rid of that because you’re coming off as bitter and negative?'” Outlining what you don’t want in a guy might seem like a good way to deter the old guys with no hair, but your bad-attitude laundry list will probably repel your Prince Charming as well. People really pick up on negativity in a profile, says Miller. “If they have five other women they’re thinking of contacting, chances are they’re going to go to someone who sounds a bit more positive.” Contrary to popular belief, says Katz, the purpose of your profile is not to weed out the weirdos. “Focus on writing something that’s interesting and positive, funny and warm, and try to attract the right guy instead of repelling the wrong guy,” he says.

Alright, so you’re not thrilled with your weight, your chin waddle or your crow’s feet. But come on, girl, you know men – if your goal is to start a dating relationship, the guy is going to want to see what you look like. “Men are still more interested in the visual,” says Lenton, who found that her male study participants were attracted to profiles that included a photo. The numbers speak for themselves. “People who have photos get seven to 10 times more responses,” says Miller of the profiles on Lavalife. Yes, your winning personality should be more important than your looks, but admit it, you’re likely to click right past a man’s profile if there’s no photo to whet your palate. So call up your shutterbug best friend and get snapping. Miller suggests posting a clear, smiling headshot that’s less than six months old for your main photo. Action shots of you holding up the Leaning Tower of Pisa or windsurfing in Malibu are great additions to your private or “backstage” photo galleries. And steer clear of glamour shots. “They may look fantastic, but if you don’t look like that day-to-day, then it can be misleading. You really want it to look like you.”

After hours of writing, tinkering and crafting your profile with tender loving care, you’ve finally launched it. Now all you have to do is sit back and let the emails roll in, right? Wrong. “Your online profile is the embodiment of who you are, and it’s always subject to change,” says Katz. “Just because you write something, it doesn’t mean it’s set in stone.” Re-evaluate your profile every few months and ask yourself if anything’s changed in your life. Give the guys online an update on your new puppy, latest hair colour and especially your hard-earned promotion. “A career is now considered to be an attractive feature in a woman,” says Lenton. “Men are looking for women who have careers as opposed to just jobs.” Updating your profile regularly will also put you higher up in a search category, meaning a man seeking a woman with your stats will likely see your smiling face among the first on his list. Most dating sites will tell users when a profile was last updated – kind of like an expiry date. So give yourself a fighting chance by making sure both your photo and information are fresh.

Need some creative date ideas? Check out our create-a-date tool to point you in the right direction.

* Names have been changed.