Why do mothers feel compelled to lie? 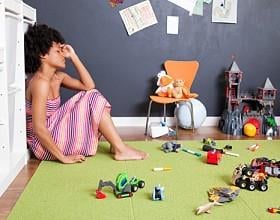 The scene: You’re hanging out with your moms’ group while your collective of pre-schoolers tumble about with their toys scattered on the floor. One mom shares that her baby Sarah doesn’t even want to watch TV—she’s not interested in it! “Er, yeah, same here,” you say, praying that your little Parker won’t break out with his rendition of The Backyardigans theme song. “Thirsty, thirsty, thirs—“ Parker starts to scream. Host mom offers to fill a sippy cup of milk or water because after all, little Jack doesn’t drink any juice, she notes. “Same here—milk’s fine,” you assure host mom, once again hoping that Parker doesn’t toss the cup aside once he realizes it’s not apple juice.

Oh those little mommy lies that smooth over our parental guilt. Who hasn’t told a fib or two about how we parent our kids? Don’t lie—are you always honest about where you shop for your kids? How often you serve Kraft Dinner? How much screen time your child gets? How well potty training is going? If so, take heart that you’re not the only one fibbing.

The Internet parenting site Netmums surveyed some 5,000 parents recently and almost one quarter of the respondents reported they’re not exactly honest in how much TV their children watch; almost two thirds of respondents said they weren’t totally honest with other moms in how well they were handling motherhood; and almost half had financial concerns they also covered up. So what’s with all the lying? Is there something about parenthood that brings out our inner Stephen Glass?

Part of it might be the pressure we’re bringing down on ourselves to be June Cleaver. “Parents, and particularly moms, are incredibly stressed. The pressure on parents to keep up financially, with their children academically, and then trying to be the perfect parent, is great,” says Jennifer Kolari, a Toronto-therapist and author of Connected Parenting How to Raise a Great Kid. “And kids are tough today—they’re hard, they talk back to parents, they say no. The current parenting model is very child-centred and that’s exhausting for parents.”

In short, trying to cram in parent perfection means sometimes resorting to fiction over fact when we’re laying bare to others what life is like for ourselves. “And because we’re not honest with each other as moms, it raises the bar even higher,” says Kolari. “If people are actually saying oh, I can barely keep up with my kid’s life, we might think thank goodness we’re not the only one!” (Anyone remember the Desperate Housewives episode where Lynette breaks down thinking that she can’t do anything right and fellow wives Bree and Susan admit the same thing?) So how can we break the cycle of lying? “It’s a struggle because it’s a collective issue and someone has to be the bravest one to start and tell the truth,” says Kolari. “But to start, I tell parents to remember, we’re all going to blow it sometimes.” Here’s what else Kolari suggests to keep in mind:

Remember what’s important: If you’re spending time with your children and it’s meaningful quality time with appropriate limits in your loving relationship, that’s so much more important than whether or not you should order in or not.

Ease up: So many of us are prone to over-programming, whether we intend to or not, and that can build the pressure on being the perfect parent. “If all of your time is running and driving and chauffeuring and supervising, that’s not what we signed up for,” she says. “We have to be able to laugh and have a sense of humour.”

Don’t forget yourself: Ease your stress on perfecting your parenting and remember there’s a woman behind that mother—so don’t forget to do things for yourself. “It becomes really hard on us when our entire definition of ourselves is a mother,” says Kolari. “That’s a small world so branch outside that world and do things for yourself. You have to find other things to make you happy and that define you.”

And if you’re like Lynette and think everyone else is being the perfect parent and you aren’t, think again. “I can say this as a therapist that we’re all imperfect,” Kolari says. “Behind every door there are kids refusing to throw their snowsuits on, kids arguing, kids not getting their homework done and it’s all normal. We need to embrace that.”