What’s wrong with buying your own engagement ring?

A new survey finds that more and more heterosexual couples are splitting the cost of the all-important engagement ring. 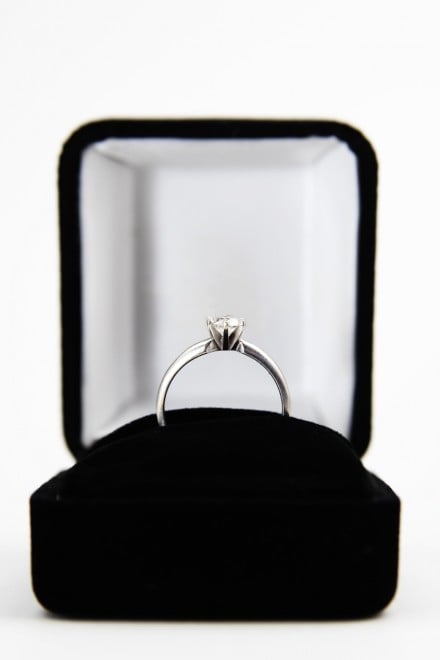 While some gals still can’t help but cringe when a date insists on going Dutch, it appears that there are a number of women that are a little more open-minded when it comes to marrying financial concerns with romance. Not only are these enlightened souls buying dinner, they’re going all the way and choosing to go halfsies on their own engagement ring (via Jezebel.com).

According to Jezebel.com, The Knot recently revealed the results of a survey that found more and more heterosexual couples are splitting the cost of the all-important engagement ring.

I would add that I hardly expected my beloved to go broke on me either. In fact, I would have been horrified if he’d gone into debt to impress me with something over the top. I still have no idea how much he spent on the ring and I don’t want to know. It’s perfect and the look on his face when he asked me was priceless.

But before I make myself up to be some kind of idealistic romantic heroine, I will confess that as he reached for the ring in his pocket and I realized that he was in fact proposing I said a brief internal prayer that the ring would be pretty.

Prayer answered and then some.

On the scale of human crimes against love, splitting the cost of an engagement ring hardly registers a sigh. Admittedly, there are probably more practical reasons to do it than not to do it. But then again, I can’t help but think that it doesn’t hurt to keep one or two traditions alive in the increasingly romance-less world of relationships. Not to mention the fact that it’s hard to surprise someone with an enduring symbol of your love if you’ve already presented them with a tally of what they owe.

Where do you stand? Would you pitch in for the ring you want?