Six ways to deal when your divorced parents act like children

As the adult child of divorced parents, you can sometimes feel stuck in the middle. Find out how to deal with feuding parents later in life. 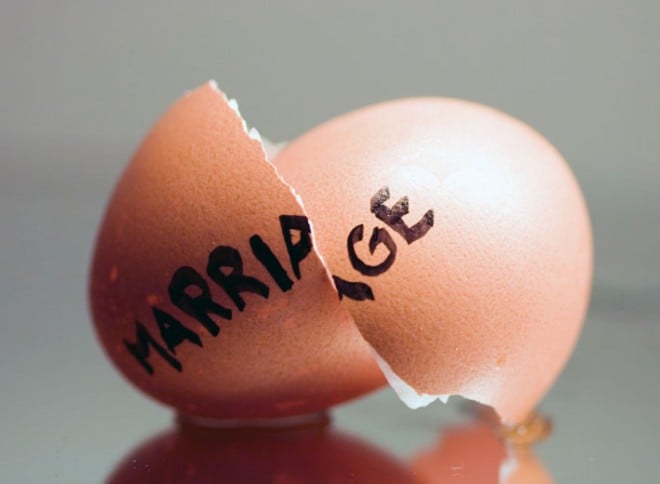 How do you deal with your parents’ broken marriage as an adult (Photo by iStock).

You’re getting married and it should be one of the happiest times in your life. But instead of thinking about floral arrangements, you’re worried that if you invite your mother to the wedding your dad and his new wife won’t come, or vice versa.

Though it sounds like a sitcom-inspired nightmare, it’s not an uncommon scenario as more couples are choosing to sever ties after decades of marriage, leaving their adult children squarely in the middle, trying to navigate the choppy waters of familial discord. In fact, the term “How to phrase a wedding invitation when you have divorced parents” is one of the highest-searched wedding-related terms online.

Fortunately, issues of custody no longer apply past the age of majority and you don’t have to choose Mom over Dad — even if they’re not so secretly hoping you’ll pick a side.

Here are six tips for adult children trying to cope with divorced parents who just won’t get along.

1. Pause for empathy
Your mother rolls her eyes every time your dad’s name is mentioned. Your father has never acknowledged how much he hurt your mom when he left and took up with the yoga instructor.

Both parents make their myopic vision of the past your problem and it’s driving you crazy. But before you pick up the phone and let loose on one or both, take a moment to understand that the source of all that bad behaviour on both sides is unresolved emotion — simply put it’s hurt feelings that have never been allowed to heal.

“Just because parents get divorced doesn’t mean that they have sorted out or worked through their previous marriage,” says Shyamala Kiru, a couples and family therapist based in Markham, ON.

“What often happens is that there are lots of unresolved issues that the parents still have from that marriage and they don’t deal with them appropriately. Rather than say, going to a therapist and working through some of that…they continue to pull the children into that.”

Now that you’ve identified the issue — feelings that need to be dealt with — you can make adaptations that will serve the entire family’s healing process.

2. Don’t play therapist
Mom and Dad clearly need to resolve their issues, but don’t be tempted to assign yourself the role of therapist. “It’s not your role to help your parent process the divorce,” says Kiru.

For one, sorting out their private issues is well beyond your pay grade, so to speak. More important, you really don’t need to know the nitty-gritty behind their split.

That doesn’t mean you aren’t supportive and patient and sensitive with your parents. It just means that instead of listening to a tearful diatribe about your father as a therapist or good friend might, you play the role of daughter and take your mom out to lunch and for an impromptu spa day.

3. When family dynamics change so should boundaries
One way to ensure you don’t get caught in the middle between bickering parents is to draw firm boundaries, says Kiru.

“The biggest thing that I work with in terms of divorced parents and families is [establishing] boundaries,” she says, who adds that establishing boundaries is important in every relationship from the one we have with our colleagues to our spouse and kids.

Establish boundaries by informing your parents that negative talk about the other isn’t appropriate with you. Be frank and supportive. Say something along the lines of ‘Mom, I love you, want to support you, and realize this is hard for you, perhaps you should seek a professional or a good friend you can talk to about this. I’m not the right person to talk to because that’s putting me in the middle, and I need to have a healthy relationship with Dad,’” explains Kiru.

4. How to have the ‘enough is enough’ conversation
You’ve had it with all of the back and forth and the bickering and you want your parents to know. Rather than lose it on them in the heat of the moment, take a measured approach. Kiru advises to choose a time when emotional temperatures are stable.

“Take Mom or Dad out for lunch and let them know in advance that there’s something you want to talk to them about and that it might be difficult to hear, ” she says.

Be frank, says Kiru. Let them know that you can understand their situation but that you’re in a tight spot, too. And then make the request to be left out of all future squabbles or sarcastic asides.

Then it’s a waiting game. If one or both parents is able to make the change, then hallelujah! If not, you have two choices: make the request again or decide that you’re not going to participate in any discussions or jokes that make you uncomfortable.

“The only two things that we can control of in life are our thoughts and our actions.”

Tell Mom that’s her choice and it’s one that will cause you pain. But once you’ve said your piece, leave the decision to her and don’t torture yourself with the consequences of her actions one way or the other. Instead “manage your own emotions,” says Kiru. That may mean speaking to a therapist or a good supportive friend about your own unresolved feelings related to your parents’ divorce and the resulting fallout.

6. The good news: You won’t make the same mistake
Regardless of how your parents squabbling pans out, one thing is for certain: you’ve learned from their mistakes and misjudgments and you’re resolved not to repeat the same.

“As the adult child, you can change the way you do things with your own children [or family].”

Do your divorced parents still squabble? Tell us how you deal, as an adult child, in the comment section below.