What to do if you can't stand your man's best friend

Don't always see eye-to-eye with your guy's guy? Here are seven expert tips on how to find a common ground 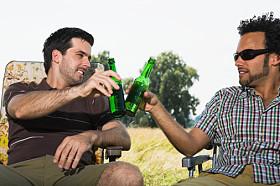 Is your man’s bestie a little rough around the edges? Maybe he’s a bit too much of a player and regularly drags your man out to be his wing man. Or perhaps he’s all beer-and-hockey and you’re more ballet-and-films and between you, there’s zero middle ground.

But the truth is, he’s not going away any time soon as much as you’d like him to. So to make the situation liveable at the least, we asked Diane Anderson, a relationship counsellor in Surrey, B.C., to help come up with a seven-point plan to make peace with his pal.

1. Understand the Back story. A new relationship can often leave a best friend wondering—where do I fit now? “So there could be a bit of jealousy—his buddy was always free and available and now he’s not because there’s a new woman in his life,” says Anderson. “And we know that men tend to have emotional closeness with their female relationships in ways that they actually don’t get from their male relationships. So how will it impact the friendship?”

2. Realize it might be you. Or more specifically, your insecurities. Have you had a bad best friend in the past? “Or does this new friend leave you wondering–well, he knows everything about his past girlfriends and are we being compared?’” says Anderson. “So our insecurities can come out if we’re not feeling confident. And you need to be clear about what it is that’s bothering you.”

3. Pretend you’re Mrs. Brady. “There’s a period of adjustment, kind of like moving in as a step-parent,” says Anderson. “You’ve got to give it some time and let yourself be known and let the friend know that you’re not a threat to the relationship.”

4. Handle the hazing. “You might need to go through a bit of trial by fire because that can be the way guys relate,” says Anderson. “Don’t allow yourself to be disrespected but allow yourself to be teased a little bit.” As Anderson notes, not all men know how to have relationships with women that don’t become sexualized. “ So when their best friend has a woman, they might wonder how do I become friends with her if I’m not going to be sexual with her, and some men revert back to what it was like in grade three,” she says.

5. Extend a hand. As much as you may hate it, encourage your man to see his best friend and not bypass all their burpy beer nights. “So don’t be with your boyfriend or husband all the time,” says Anderson. You can also include them into your own plans—inviting them over to dinner or out on group movie nights to include him in your life.

6. Take separate corners. If you just can’t get along, for now, agree to co-exist—for now–in separate corners of your man’s life. “And be frank with your partner that he’s driving you crazy,” says Anderson. “But you have to have some credibility there—tell him you’ve given it time, you’ve tried to include him, but be able to identify what the problem is.” Your man may have to step in to try and make some peace between the two of you, or at least help you co-exist.