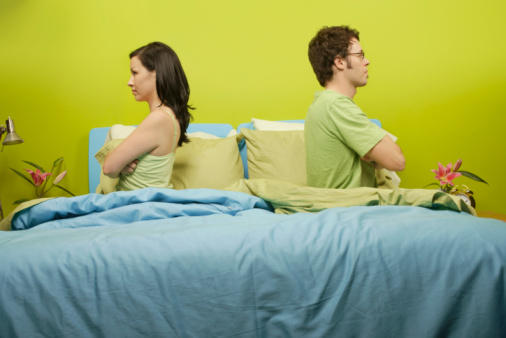 My office door swings open and an infuriated man storms across the room, describing an argument that took place between him and his partner moments earlier.

“As you know, ‘Jane’ is happy having sex once a week and I’d like to be up in the range of four to five times. Well on the way here, Jane confesses to me that the sore back excuses she’s been using to ‘get out of’ having sex with me were all a big lie, and she doesn’t even have back pain!” ‘Jason’ then turns to Jane and says, “Why can’t you ever just be honest? Since the day I met you, you’ve been a liar. What is wrong with you?” (All names are pseudonyms.)

Jane’s response? Silence. She has shut down and is simply staring at the floor, not uttering a word.

As a therapist, I’m always on the lookout for a few critical signs that a relationship might be headed down a path of destruction. There are four particular types of negative interactions that are so lethal to a relationship that therapist and researcher Dr. Gottman calls them the “Four Horsemen of the Apocalypse.” Identifying these signs — and working towards stopping them — is key to sustaining a healthy, long-term relationship.

1. Criticism: We all have complaints about the person we are with. Sometimes they’re minor (she constantly refers to the pets as your “children” and he continually mistakes the floor for the hamper) and don’t cause a lot of turmoil within the relationship.

However, there is a huge difference between a complaint and a criticism. A complaint focuses on a specific behaviour or action, while a criticism is more global and focuses on your mate’s character or personality, adding negative words with a side of character assassination. For example, a complaint would be, “There are no clean towels. Why didn’t you do a load of laundry like you said you would?” whereas a criticism would be, “Why can’t you ever remember anything? I told you a million times that we need to do laundry on Sunday!”

2. Contempt: This is a tricky one, as it takes many forms and expresses itself in many ways. Sarcasm, cynicism, name-calling, sneering, mockery, eye rolling and hostile humour are all forms of contempt. When your main goal is to demean your partner, it’s virtually impossible to resolve a problem. If you catch yourself conveying contempt for your partner, walk away and take a minute to cool down, then remind yourself of your age — eye rolling and name calling are childish.

3. Defensiveness: Defensiveness is really a way of blaming your mate, saying, in effect, “The problem is you, not me.” You’re telling your partner that his or her complaints are unjustified, outlandish, without merit, or simply their problem. Defensiveness only escalates conflict, creating piles of excuses instead of solving problems. If you find yourself falling into the defensive role often, try acknowledging your partner’s complaint first instead of immediately offering up an excuse or defending your actions.

4. Stonewalling: Anyone can stonewall, but this behaviour is far more common among men. The process of stonewalling involves shutting down completely so you are not giving any feedback to your partner’s words or actions. For example, during a typical conversation the listener gives many cues that they are paying attention: eye contact, head nods, or the occasional “uh-huh.” But an individual who is stonewalling doesn’t give any feedback, tends to look away or down, and simply sits silently — just as Jane was doing in my office while Jason was yelling at her.

If you find yourself stonewalling your partner, try to be honest with them about why you feel yourself shutting down. Perhaps you are overwhelmed by the yelling, feeling attacked, or simply not in a good head space to confront the issue at the moment. However, once you’ve had time to regroup, make sure to come back to discussing the issue together. If you continually disengage, you are not simply avoiding a fight, you are avoiding the problem — and most importantly, the relationship.

Jane and Jason showed three out of the four of these harmful behaviours within a few minutes of walking into my office. While these actions could appear in most relationships at some time or another, it is their frequency that we need to be aware of. The couple in my office was eventually able to calm down and discuss the issue more productively; however, it took time to help them become aware of their harmful behaviours. It’s an important first step to recognize these when you see them — identifying them is the only way to start correcting them.