We polled the pros for their very best wisdom on how to create a happy union. Find out what they said. 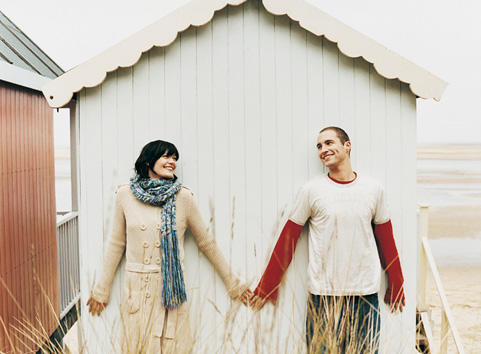 Sure, this Valentine’s Day you could just give your sweetie something wrapped in pink foil, or something that says, “Hey, I was thinking of you!” and “Did you know that the gas station two blocks from here conveniently started carrying heart-shaped chocolates?” But a much better gift, the gift that keeps on giving, is to commit to working on the kinks in your relationship. Here are some tips from the experts to get you started.

1. It’s not him, it’s you: If you’re having problems, it’s too easy to blame someone else; think about how you’re contributing to any toxicity in your relationship. “A sad, resentful person drags down the mood and behavior of everyone in the house, [and] a happy, forgiving person lifts it up,” says Alisa Bowman, author of Project Happily Ever After. “If you learn how to effectively solve problems, your spouse will follow.”

2. Touch affectionately and often: “The key to creating good feelings that easily segue into the bedroom is to affectionately touch each other at least once a day,” says sexologist Trina Read, author of Till Sex Do Us Part. She says that new couples are recognizable because they’re wrapped around each other like pretzels. (And you know how much we all love to see that sitting next to us on the subway.) But it’s that constant contact that makes sex so much more enticing.

3. Schedule a sex night: While it might sound like a drag to put sex down on the calendar, along with dreaded activities like dental appointments and birthday parties for small children, the consensus is that it’s necessary and it works. Marriage consultant Melissa Orlov, author of The ADHD Effect on Marriage, suggests designating one night a week for love – in any of its wonderful, sometimes weird forms. (No judgment.)

4. Think beyond the orgasm: “When people think about having sex, most only think in terms of walking into the bedroom and getting each other off,” says Read. Which is pretty good. “[But] putting just a tiny bit of thought into doing something different will add excitement and give you the feeling of fun and lust you had when you first met.” So instead of racing to the finish line during the commercial break for The Biggest Loser, consider buying a pair of fuzzy handcuffs and settling in for the night.

5. Give each other space: A successful long-term relationship doesn’t have to involve morphing into the same person, wearing matching sweaters and knitting identical versions for your beloved Pomeranians. It’s okay to like different things and take some space to pursue them. “If you only ever go out with each other and never keep up with the interests and friends you had before you began the relationship, life will atrophy quite quickly and you will soon have nothing to talk about, and nothing to bring to the relationship from outside,” says Kate Figes, author of Couples: The Truth. “A healthy relationship means not losing yourself, or sacrificing yourself for the sake of the other.”

6. Be assertive, not confrontational: It’s such a fine line in relationships, the ability to sensibly communicate what you need versus the desire to clonk your partner over the head with the empty milk carton he keeps putting back in the fridge. Bowman suggests focusing on your goal instead of making things personal, owning up to your share of the blame, talking side-by-side instead of face-to-face, touching gently while communicating (which can ward off defensiveness), trying not to sound irritated (which takes practice), and keeping requests short and to the point.

7. Make joy happen: A joy-filled relationship isn’t just going to show up on your doorstep wrapped in a giant bow; like most other things in life, you’ve got to work a little for it. One of the best ways to do that is to try new things together as a couple, says Orlov. “Make time to add new and challenging activities to your schedule because research on romance shows that this will connect you better and faster than just about anything else.”

8. Say you’re sorry: It can be tough to admit that you were wrong – even if both you and your partner know it – but it’s important. “Apology can heal many relationship problems, as well as inspire and help sustain respect, trust and [compassion],” says psychotherapist Beverly Engel, author of The Power of Apology. Saying sorry conveys that you care about your partner’s feelings, and that you care more about the relationship than about being right. (Plus, then you can move past the funk and onto the makeup sex.)

9. If it’s not working, change it: “Every couple faces hard times, and as we look for ways out of our troubles it’s tempting to say ‘I’ll just try harder and it will be okay,’” says Orlov. But repeating the same things that aren’t working isn’t going to help. Instead, she recommends consulting professionals, reading books and getting creative to find a fresh approach.

10. Nobody else can make you happy: “While a good relationship can certainly contribute to your happiness, it cannot create it,” says Engel. If your life doesn’t work, it’s up to you to fix it and bring your best to the relationship by taking responsibility for any issues you have and addressing them. Even if your partner is the cause of some of your dissatisfaction, it’s still your responsibility to communicate your needs in a clear, non-accusatory way