For one woman, opposites really do attract...

The last thing Kate Growney ever thought she’ d do was kill for love, but then the former fashionista fell for a hunter. 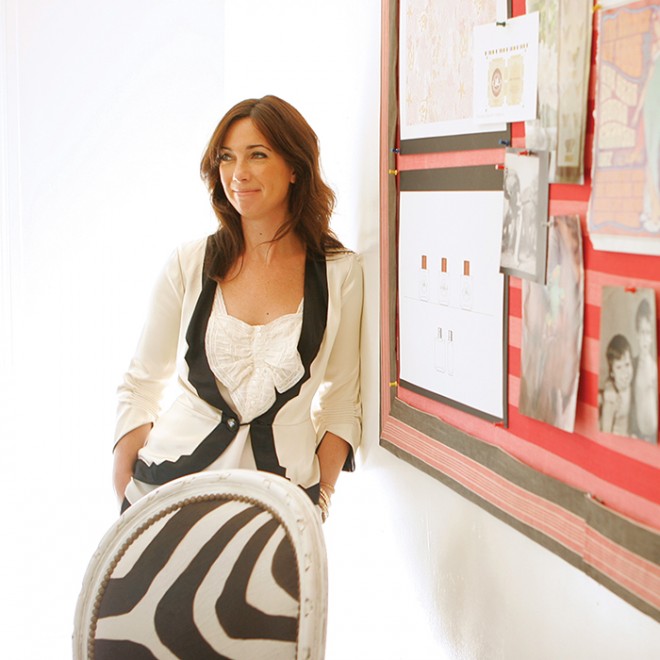 “We are not here to make you better hunters, we are here to make you better citizens,” the instructor said. I pulled out my number 2 pencil and opened my Hunter Safety Education Manual. “At the end of the three-day course you will take a comprehensive test,” she said. “If you pass, you will qualify to apply for your Hawaiian hunting licence. Why don’t we start by going around the room and telling everyone a little bit about ourselves and why we are here?”

I looked around at the 32 other people in the class, eight of whom were kids between 10 and 16 years old (this was America, after all). I was up first. “Um, I own a perfume company called Saffron James. I used to be a fashion and beauty editor, and I own 56 pairs of shoes,” I mumbled. “In nine days archery season opens and my boyfriend is taking me on my first hunt.” I realized I was the only one wearing a dress.

My left armpit was sweating. Just the left. Guns were displayed at the front of the class. I wanted to look away, but I couldn’t. I hate guns.

The instructor continued: “Every gun you touch is . . .? Loaded. That’s right. The first thing we do is point the muzzle in a safe direction. Check that the magazine is out and, most important, that the chamber is clear.”

Yes, I’m in this class because of a boy. I’m not ashamed to admit it. His scent alone has inspired me to do a lot of things I’ve never done before — like folding the laundry while it’s still warm from the dryer. I would do just about anything for him.

We met on a blind date through mutual friends. I fell for him the second he walked through the door. I’m usually a sucker for the angst-ridden intellectual type and have a failed marriage and a rocky dating history to show for it. He was . . . well, the antithesis. A professional hunting and fishing guide (certified one-ton-boat captain, fly-fishing guide, bow and rifle hunting guide), he enviably learned what his passion in life was as a kid. An enthusiastic grandfather and growing up on a large ranch in southern Texas gave him a taste for outdoor adventure. He has chased elusive game fish off the coast of Panama and shared fishing holes with bears in the Rockies.

Collin owns two 12-gauge shotguns, one Winchester Short Magnum, one Winchester Model 94, a saddle gun, a single-shot .22 rifle, a .22 Magnum revolver and a Mathews Helim Compound Bow. When he moved in, the first thing we bought together was a gun safe. It looks like a bank from the days of the Wild West. It’s big and green with a gold nautical-looking handle, and it’s bolted to the floor in a closet in our basement. I won’t let him keep a gun in our bedroom. It’s the only argument we’ve ever had.

Collin tries to eat only what he kills. The first time he made me dinner, he cooked a goat he shot in the mountains behind Kailua, Hawaii. It was delicious. Since then I’ve had venison burgers, homemade jerky and more goat. 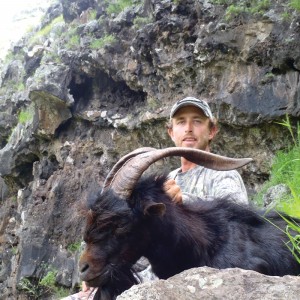 Collin with the goat he killed and cooked for his first dinner date with Kate.

I tolerate the skulls that now decorate the wall of my patio, mostly because they’re trendy right now, whereas Collin has a personal relationship with and a memory of each one. I fear I’m a modern parody. I sometimes held my breath while watching Saturday Night Live, waiting for Kristen Wiig to imitate me. I’ve flippantly announced to my fashionista friends that “on the inside, I’m a Prius-driving vegan who loves yoga.” The truth is I want to be most of those things, but I never seem to quite get there. My boyfriend has made me challenge myself to be more honest. Like many people, I’ve complained about being out of touch with our food sources, but ultimately there is only one way to truly understand and appreciate where your food comes from: Kill it yourself.

But can a woman who spent her days seriously debating the pros and cons of nail colours and bikini waxes really find love with a man who has a K.S.E.D. (Kill Something Every Day) sticker on his truck?

I know to most of my friends it seems like an unlikely pairing. But then he surprises me every day. Little things. Big things. He always remembers the anniversary of the day we met. No flowers, just a tender, quiet acknowledgement with a sincere kiss. Perfect. Did I mention he loves to garden? On our six-month anniversary, when he presented me with a Diamondback Tactical Compound Bow, I was astonished. I was even more surprised at myself when I fired my first arrow — I loved it.

Before I left for my hunting class, Collin hugged me proudly and said, “Just think. By the end of next week you could have your first kill!” It made me feel dizzy. My mouth went dry. I was silent and tried hard to smile.