Turns out gossip isn't just a sinful pleasure. It's actually good for you (yippee!) 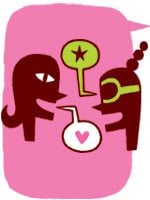 There’s this woman I know who’s having an aff – c’mon, you want to know more, don’t you? It’s ok, we won’t judge you for being interested in the anonymous – and made up – woman’s secret (we would want to know about her affair, too).

Truth is, we all give in to the lure of gossip every now and then. Think that makes you a bad person? Not so, says Dr. Catherine Gildiner, Chatelaine’s Ask an expert psychologist. “Gossiping can actually be healthy for you, so long as you’re not intentionally hurting or betraying people,” says Dr. Gildiner. In fact, recent research shows that two-thirds of human conversation is a form of gossip, and only five per cent is the malicious don’t-do-it kind. Other experts agree: when we do it right, gossip actually serves a purpose in our lives, from helping us figure out what kind of behaviour is acceptable to spreading information. Make sure that you fully understand the ground rules (see

The rules of gossip) and read on to find out if you’re on the right side of the gossip etiquette line.
The good-news girl

She loves to spread happy news, even when it’s not hers.
You might hear her say “I have the best news, John! Your wife is pregnant!”

If you’re a good-news girl, you likely love being the centre of attention. Jacqueline (some names have been changed) of Winnipeg understands the urge to pass on good tidings. “I’m so thrilled about the good news I just want to share it with everyone,” says the 32-year-old. “But one of my sisters has gotten mad at me in the past, so I’m trying to stop.” No matter how badly you want to share someone else’s news, keep it buttoned unless you’re told otherwise, says Chatelaine’s Ask an expert etiquette columnist Alison Bruce.

She tells the truth… sort of.

You might hear her say “Pete gave her that bracelet because he was working out of town so much. You know what that means.”

If you’re an exaggerator, you’re risking your credibility. Molly of St. Peter’s, N.S., knows that her mother’s stories are likely blown out of proportion. “For instance, a friend of hers recently made a complaint about her children’s school,” says Molly. “When my mother retold the story, the woman was all of a sudden suing the vice-principal and transferring her children to a new school.”

How to deal with the exaggerator Don’t believe everything she says. And know that whatever you tell her will go through her exaggeration filter. “If that altered version gets back to the person whom you were talking about and she realizes it started with you, you’re on the hook,” says Stacey Nairn, a researcher and assistant professor of social psychology at the University of Prince Edward Island in Charlottetown. “Don’t forget, you started it.”

She does her grocery shopping on Monday nights because that’s when the tabloids hit the stands.

You might hear her say “I’m worried about Justin and Cameron. They were arguing over sushi the other night.”

If you’re a celebrity disher, go wild – it’s fair game. “Celebrities know that it comes with the business,” says Larysa Harapyn, Startv’s host and associate producer. “You see them more regularly than you see your neighbour, and you can’t help but feel a personal connection to them and want to talk about them.”

How to deal with the celebrity disher It doesn’t really matter what your friend Kathy has to say about Céline Dion – it’s never going to get back to the singer, so she’s free to say whatever she wants whether it’s true or false. (The same wouldn’t be true if she were, say, Entertainment Tonight’s head writer or an entertainment columnist for a newspaper.)

She shows up at family events just so she can talk about them afterwards.

You might hear her say “We’re all family here and I love cousin Cindy and everything, but….”

If you’re a family grapeviner, consider what’s at stake. Relationships can be damaged by family gossip, says Nairn. You could set yourself up for some tense holidays. But gossip in a family isn’t always bad because it can help put certain behaviour into context. Finding out that your aunt Alice and uncle John went bankrupt 20 years ago, for example, goes a long way toward understanding (and forgiving) their penny-pinching now.

How to deal with the family grapeviner Angela, 32, of Vancouver hates when her mom gossips about family members, especially since it’s usually negative. “Hearing her talk about all our relatives sends the message that we are constantly being judged,” she says. The way to handle someone like Angela’s mother, says Karen Mallett, an etiquette expert and co-founder of In Good Company, a training and development company in Winnipeg, is to come right out and tell her how it makes you feel. “You don’t have to be Miss Priss about it, but there’s nothing wrong with saying, ‘This person is not here to defend herself, so I don’t think we should be talking about her like this,'” she says.

She spends more time talking than actually doing any work.

You might hear her say “Susan from marketing took a two-hour lunch today. I bet she was at a job interview.”

If you’re a chatty co-worker, be careful. If you’re saying things that reflect poorly on your company and the higher-ups find out, they may be less than impressed. Caitlin of Winnipeg learned that lesson as a teenager. “I was talking to one of my co-workers about the store we worked in,” she remembers. “I was overheard by a manager who confronted me about it. I was so humiliated, I quit on the spot.”

How to deal with the chatty co-worker “When the vice-president of rumours corners you, suggest she talk to the person she’s talking about,” says Mallett. “Hopefully she’ll move on to someone else because you’ll become too ‘boring’ to gossip with.” But it’s ok to give in a little. A recent study from the St. Bartholomew school of nursing and midwifery at City University in London discovered that gossiping with colleagues can be good for employees because it allows them to blow off steam and cope with work stress. Plus, office chit-chat can spread valuable information, says Nairn, such as job opportunities.

She doesn’t let a torrential downpour keep her from spying on her neighbours from her front porch.

You might hear her say “I was taking out the garbage last night and I couldn’t help but notice a police car parked in Becky Smith’s driveway.”

If you’re a town crier, limit your chatter to information that won’t damage your neighbours’ reputations – unlike what Annie’s community did before she and her family left her small hometown on the shores of northwest New Brunswick. Her father relocated to Ontario a few months in advance of the rest of the family to set up, causing quite a stir back home. “My mom’s best friend’s husband would come over to help out with things that my mom had a hard time doing, such as chopping wood,” says Annie. Soon, neighbours were speculating as to what he was doing at the house with Annie’s mom. “My mom’s response was clear. She just said, ‘ This is why we’re moving.’ “

How to deal with the town crier Turn the tables: use her ability to spread news in a positive way by only telling her things you want others to know about, such as how well-run the golf tournament was.