More men wish their partners would cuddle in bed

Remember when you were so in love that your goodnight kiss lasted into the early morning? Well, that was then and this is now. 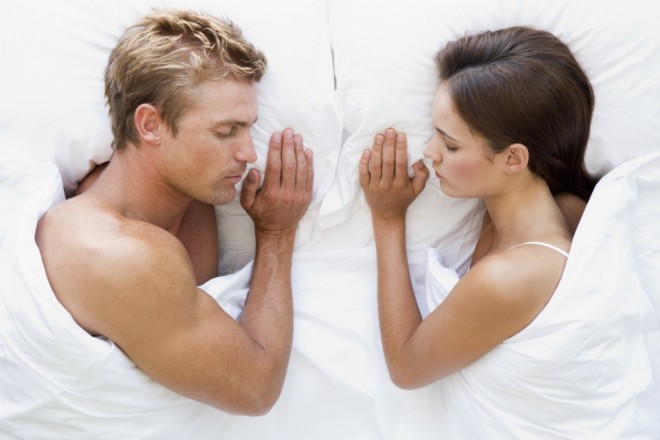 Remember when you were so in love that your goodnight kiss lasted into the early morning? Well, that was then and this is now.

Now, according to a recent survey of 2,000 couples conducted by Travelodge, eight out of 10 of us have abandoned the sweet ritual of the goodnight kiss altogether.

Only 10 percent of those surveyed still cling to the quaint custom of proclaiming their love at bedtime, while the more pragmatic — or exhausted — majority would rather hit the pillow leaving their feelings unsaid or at least implied.

The U.K. sleep study makes it clear that when it comes to a choice between getting a good night’s rest and enacting traditional romantic gestures associated with sleeping together, most couples opt for the comfortable over the comforting.

Surprisingly, one in 10 among respondents report sleeping separately while a whopping one-quarter of participants in the 35-44 age demographic confess to occupying different beds. Those who do share a marital bed generally prefer to sleep back-to-back rather than facing each other with 25 percent saying that they would rather not have to endure any physical contact with their partners while they sleep. (Can only imagine how that translates when they’re awake.)

According to The Telegraph, our communal sleeping arrangements say a lot about the tone and tenor of our relationships; for example, the couple that sleeps with backs touching, each person in the fetal position, demonstrates both “innocence and trust.”

If you guess that women are the ones lamenting the loss of physical intimacy you would be wrong. Men are the mopier sex when it comes to missing the human touch — it appears that they would be happy to get cuddly if only their worn-out wives and girlfriends would let them.

Maybe it’s because after a long day spent on the job, looking after kids, running a household, carpooling and bathing the dog, for women, sleep is the strongest desire of all.

Do you cuddle in bed or prefer your own space?