Are you ready to bring your guy home for the holidays? 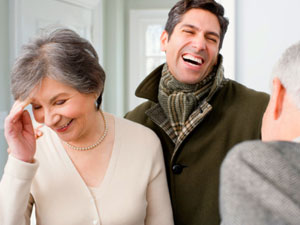 Introducing a new beau to the family can be stressful enough, but add cranberry sauce or potato latkes to the mix and you might have a recipe for disaster. “Holidays are emotional hotbeds,” says Tara O’Connell, a psychotherapist from Oakville, Ont. “The number one thing you can do is prepare in advance.” First, determine whether he’s worth exposing to your family’s reindeer games. If he is, read on to ensure that the only turkey at the table is the one being carved.

How do I avoid turning holiday dinner into an episode of Jerry Springer?

To begin, make sure the host of the event knows that you’ll be plus one. “Don’t bring an uninvited guest,” warns O’Connell. “If you haven’t sought permission or been given an open invitation, you might be setting yourself up for embarrassment.” Then, inform anyone whose opinion matters or makes you cringe (ie. Uncle How-Much-Money-Do-You-Make? Bob). “Provide them with information ahead of time,” says O’Connell. “Don’t give anyone an excuse to catch you off guard: preparation is key!”

How do I tell my kids that Mommy’s boy toy is coming to Grammy’s?

Holidays are not a good time for your children to meet your new man for the first time, says O’Connell. “Even young kids might wonder, ‘Why is this guy in our house and what’s he doing with my mother?'” Pre-arrange a meeting between your man and the munchkins, then talk to the kids privately about the big day. “You’re not asking for their permission, but providing them with a context for this person in your life,” says O’Connell. Explain that he is important and makes you happy. “Do so without making comparisons to the children’s father or suggesting that this new person is replacing Daddy at the event,” says O’Connell. For teenagers, you might want to go a step further and say, “‘If there’s someone you’d like to invite I’d be happy to include them in the day,'” says O’Connell. “That gives them the opportunity to have their own support system there.”

Can my new man participate in family rituals such as playing Santa or dressing like Hanukkah Harry?

Be sensitive to holiday traditions, especially those that were handled by a male role model in the past. “If Dad carved the turkey, don’t ask your new guy to do it,” warns O’Connell. “Plate it in the kitchen or have the oldest child do the honours, just don’t do anything that feels like there’s been a replacement.”

Presents can also be tricky: have him think ‘hostess gift’ rather than ‘buying his way into your family’s hearts.’ “Gifts should be handled as they would at any dinner party you’d go to,” says O’Connell, adding that a heartfelt card signed by your guy might earn him extra dessert. For children, your beau should also avoid playing the Donald Trump card. “Overcompensating with expensive gifts will get people’s backs up,” says O’Connell, “even small children’s.”

Family photos can also be an opportunity for awkwardness, especially if you’re wondering whether your relationship will last past New Year’s Eve. So plan with your man ahead of time: if someone pulls out a camera, have him offer to take the picture or say, ‘Family only!’

Slightly trickier are religious rituals, which you should also inform your beau about beforehand. “If he’s willing to participate, great!” says O’Connell. “However, he should be allowed to opt out if there’s resistance.”

How much family-fun should I subject him to?

“Christmas doesn’t have to be a 24-hour marathon,” says O’Connell. Figure out what’s important for him to be at – family dinner, the gift exchange – and allow for some non-group time. Ask him to make hot chocolate while you take the kids tobogganing, or go for a romantic walk with him while your family passes out in front of the yule log.

If we have to stay over, how do we deal with sleeping arrangements?

“Separate rooms, no matter what age you are,” says O’Connell, “unless the host says, ‘Listen, I’m not naive, I know what’s going on here and I’m okay with it.'” Do what’s most comfortable for everyone, even if it means one of you ends up on the pullout sofa. “The cardinal thing here is that if you want people to respect your choices, then you need to respect their sensitivities,” says O’Connell.

Wait, do I really want to expose him to the fruitcakes in my family?

“The first thing you want to do before you start preparing everybody else is ask yourself, ‘Is this a good idea?'” says O’Connell. “Is this relationship truly at the point where I want to risk ruining the day for myself because I have to juggle everybody’s sensitivities?” If the answer is ‘Um, well, not really…’ then O’Connell suggests that you let yourself off the hook this year. Go enjoy the family feast and save your stud muffin for some post-holiday dessert.