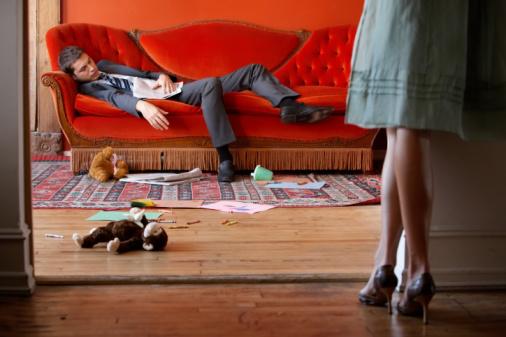 You love him, you really do. But he drives you crazy because he’s a bit tight with money, has never changed a diaper or spends too much time at the office. Of course, nobody’s perfect, but when you’re married to a partner with an annoying attribute, it can add an unspoken level of stress to your relationship. But with a little help from the experts, it is possible to learn to live with your man’s most frustrating personality traits and still have a good relationship. Here’s what the experts recommend if you’re married to:

A Workaholic:  Feel like your man would rather toil away at the office than spend an evening or weekend with you? Even if the motivation is good—he’s vying for a promotion or simply loves his job, being married to a workaholic can leave you feeling like a widow. So make every moment count—that means catching up properly at the end of the day, rather than flopping silently on the couch and staying in touch, even via e-mail or text. “People can be apart from each other physically for a long time and if they know they still exist in their partner’s minds, they will feel connected,” says Lorrie Brubacher, a Winnipeg-based couples’ therapist.

A Hopeless Unromantic: Can’t remember the last time—if ever?—your partner brought home flowers or chocolates? “People often see a lack of romance as a warning sign that the couple is losing touch, says Brubacher. You probably don’t really care if he serenades you with a sappy song; but you may be craving more of a connection. Foster it by making time for small romantic gestures, like kissing and hugging. And when you’re ready, have a conversation about how comfortable you are being close and needing him. ”The best sex and romance come from feeling needed,” says Brubacher. If he’s still not responding, consider visiting a couples’ therapist to see if there are any bigger issues.

A Cheapskate: He’s clipping coupons, low-balling restaurant tips and only shopping for clothes when they’re on sale. If your man finds it hard to part with his money, try to find out what’s at the root of his mindset. Did he grow up in a poor family or was he raised fiscally conservative? “If you find out why he is the way he is, you’ll be less apt to judge because you’ll understand the behaviour better,” says Dorothy Ratusny, a Toronto-based psychotherapist. Meanwhile if you’re embarrassed by, say, those tight restaurant tips don’t be afraid to discreetly top them up.

Mr. Undomesticated: He’s never touched a toilet brush, has no clue how to do a load of laundry and leaves a trail of dirty socks in the bedroom. Cleanliness or domestication is a value and families raise children with different values and priorities. “So if your mate was raised to be the breadwinner, he may not see the value of cleaning the bathroom over working an extra shift,” says Ratusny. After examining both your values, discuss domestic chores that you both prefer to do and divide them that way so he’ll be more likely to do them.  If things don’t turn around, consider investing in a cleaning service so you’re not tackling all of the household chores alone.

An Arguer: Feel like even a chat about the weather turns into a fight with your main squeeze?  If he’s argumentative, it may be less about finding fault with you and more about needing to be right or be heard. Ratusny suggests gently and neutrally pointing out when your partner is argumentative because he may not even realize it. Then ask: “What’s that about? Are you not feeling like you’re being heard or are you feeling the need to be right?” asks Ratusny. Then reinforce what he said so he feels heard. If he’s trying to make a point, for example, repeat it to show him you clearly understand what he’s saying, as in “Okay, if I understand this correctly, you think that we should be spending less money on our groceries?”