Is less guilt the benefit of being an overworked mom?

While women are still carrying a huge part of the childrearing duties, it seems we may feel the best about it. 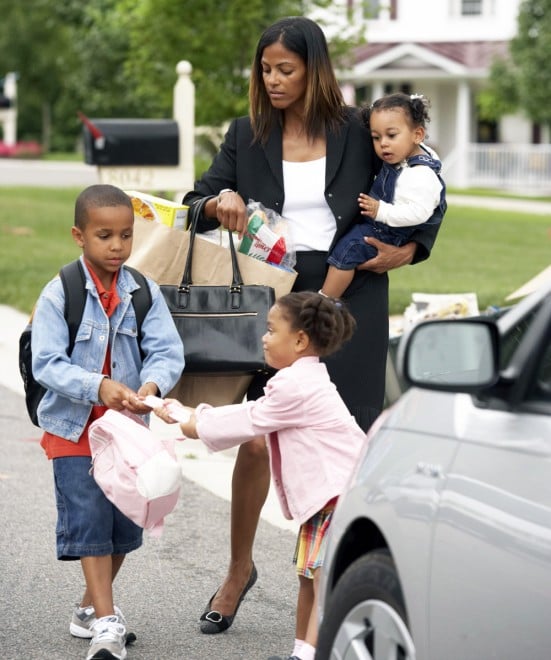 When I was a kid I can remember watching my mother in the mornings trying to get everybody ready for the day, her intense activity and correspondingly dark anxiety levels a reasonably accurate impersonation of the tornado in The Wizard of Oz.

Packing lunches, washing faces, feeding dogs, driving us to school, navigating squabbles — she soldiered on, marshaling the troops and conspicuously absent a second-in-command, my father having made a discreet exit before ensuing chaos of the morning rush. Occasionally, I looked back at my mother from the schoolyard as she prepared to head off into the workaday breach, and I was vaguely aware of her resemblance to a sweater that had gone through one too many rinse cycles.

As for my Dad, well, the greatest challenge he faced before nine a.m. was deciding between Tim Hortons and Second Cup.

That was many years ago but it appears nothing much has changed when it comes to the division of domestic labour according to a recent article in the Globe and Mail, which cited the results of a survey of working parents conducted by the Pew Research Centre.

It seems as if 46 percent of fathers reported that they didn’t spend enough time with their kids and as a result many of them were pretty sure they weren’t doing a very good job as parents. Unsurprisingly, perhaps, most of the mothers — who typically spend twice as much time with the kids as their partners (even though both work) — felt they were performing well as moms.

While men do more housework than previous generations, it’s not time to confer any medals of domestic valour just yet — women still do twice as many chores as men around the house.

One thing it seems everyone can agree on, trying to navigate the rough waters of family demand and work obligations is not for the faint of heart.

Tell us, do you love being a busy mom?