The way Kate Middleton is expected to deliver her baby is being lauded as the next big birthing trend. 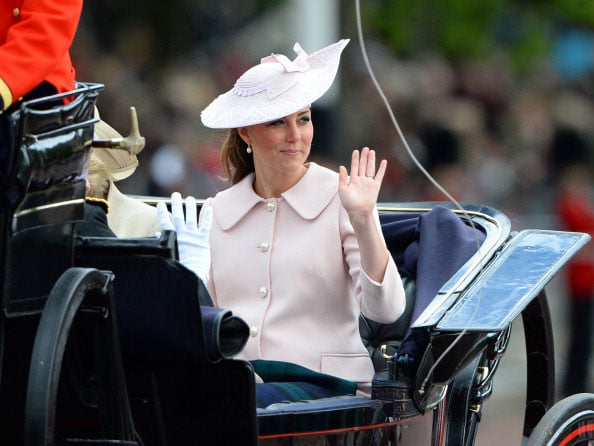 Catherine Duchess of Cambridge, travels by carriage along The Mall to the annual Trooping The Colour ceremony at Horse Guards Parade on June 15, 2013 in London, England. (Photo by Julian Parker/UK Press via Getty Images)

Kate Middleton, a.k.a The Duchess of Cambridge, is entering what many believe to be the final stages of her first pregnancy. Last week, the expectant Royal made her final official solo appearance before she takes a break to prepare for what has to be England’s most anticipated birth-day in decades.

While there’s been a lot of speculation surrounding the sex of the baby she’s carrying, and potential names have been bandied about in the U.K. press, Kate’s approach to maternity wear, outfitting the nursery and pre-natal care has also been the subject of scrutiny.

I admire her sartorial modesty when it comes to dressing for two. She doesn’t conceal her pregnancy, but she doesn’t take a primitive approach to displaying it either. I don’t think that she and Wills are posing for any of those cringe-inducing black-and-white vanity portraits — you know the ones, he’s shirtless and cupping her belly, and she’s nude but for a pair of strategically placed hands.

It’s rumoured that Middleton is also eschewing the ‘too posh to push’ trend, and rather than go the epidural or C-section route is favouring a natural birth technique known as ‘hypnobirthing’.

The technique, created by Marie Mongan in the 1980s, is more straightforward than its name suggests. Not unlike yoga, hypnobirthing is a blend of philosophy, anatomy and pragmatism. The idea behind the practice is to embrace the naturalness of childbirth and instead of fearing or fighting it, focus on the task at hand.

Women are taught how their body is working with them to deliver their baby rather than against them. And in order to facilitate the process they’re taught relaxation techniques — visualizations, breathing exercises — that are intended to make delivering what amounts to a living breathing Butterball through the vaginal canal a more manageable, positive experience.

Will Kate’s preference for natural childbirth spark a trend in the U.K. and abroad? It’s possible. While I don’t begrudge any woman who thinks hypnosis is something better left to a third-rate Las Vegas entertainer, I do admire Kate for seeking out an approach that best suits her.

In the end, that may be the most valuable lesson women can take away from the Royal pregnancy: to forge one’s own path and to choose the outfits, the names and the birth plan that best reflects their own desires.

Tell us, what technique did you use to deliver?