Is it still cheating if there's no sex?

It might seem innocent, but the consequences of emotional cheating are often anything but 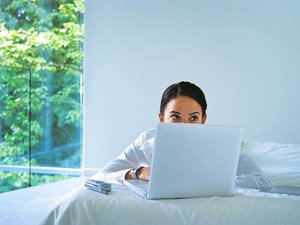 You never intended to have an affair. But let’s say your husband travels often for work, leaving you home alone with your toddler and a wayward imagination. So one evening, while online, you see an advertisement for classmates.com, click on it and type in your alma mater. A list of people who you haven’t thought of in years pops up. And then you see the name of your college crush, the boy who would smile at you in English class and torment your undergraduate heart. Fifteen years later, you wonder how Jim has aged. Your heart beats quickly as you type, “Remember me? Just came across your name and thought I would say hello.”

The next evening, you check your e-mail. “Good to hear from you!” the subject line blares. It’s Jim, and of course he remembers you. You e-mail back and the exchange continues for months, only you never mention it to your husband. Jim is also unhappily married and you begin to commiserate. Is this cheating?

The answer, according to M. Gary Neuman, a Florida-based psychotherapist and the author of Emotional Infidelity, is yes. “Anytime you’re hiding a relationship from your partner with a member of the opposite sex, you’re being unfaithful,” he explains. “And if you’re sharing your deepest thoughts or secrets with this third person that you’re not sharing with your spouse, that’s emotional infidelity.”

A recently coined phenomenon, emotional infidelity is loosely defined as any time a person – whether an online pal, a colleague or a former sweetheart – becomes as important or more important than your partner. And yet, most people don’t set out to have an emotional affair. “These relationships start out innocently,” says Ruth Houston, the founder of infidelityadvice.com. “But they’re a slippery slope. By the time people realize they’re in deep, damage has been done to their primary relationship.” Houston points to Brad Pitt and Angelina Jolie as an example. “They met while working on a movie, and then Brad and Jennifer Aniston are breaking up,” Houston says. “Brad claims he didn’t sleep with Angelina until after the separation, but that doesn’t matter. If an emotional affair isn’t put in check, it can be too painful to forgive.”

Says Marilyn Barnicke Belleghem, a Burlington, Ont.-based marriage therapist, “It’s fine to flirt with the guy who makes your morning latte. It only becomes a betrayal when there’s secrecy involved.”

Today’s wired world offers plenty of this type of immediate gratification. According to Beth Hedva, a Calgary-based psychologist and the author of Betrayal, Trust and Forgiveness, the Internet “creates accelerated intimacy. All barriers are removed so you can be whoever you want to be and share your innermost feelings. And you can also delete or sign off whenever you feel like it, which you cannot do with your partner.” Stephany Alexander, the creator of womansavers.com, an online support group for women dealing with infidelity, cites online pornography as one of the top five causes of emotional infidelity. Alexander says women write in weekly to complain of their husbands abandoning them for an online fantasy. “These guys fall in love with this idea of a person and – newsflash – no one ever admits their negative traits online,” she says. “Their wives go to bed alone, feeling jealous of these fantasy women and badly about themselves.”

This is exactly what happened to Janet*. The 54-year-old retired teacher never imagined her husband, Ted*, would ever stray. “I met him through church,” she says. “We agreed to abstain from sex until marriage. My first husband cheated on me; I wanted to be sure that Ted was the right guy.”

Soon after their marriage, Ted lost his job. “When I left for work each day, he’d go online to look for work,” Janet recalls. “And when I got home, he’d still be there.”

After several months, Janet became suspicious. “Whenever I walked into his office in the evening, he’d close the screen he’d been viewing,” she recalls. “When I asked him about it, he’d say it was just an advertisement, or that he’d just finished an online card game.” Soon Ted stopped coming to bed with Janet. “I know it sounds silly, but I was jealous of his computer,” she explains. One day she clicked the “history” bar on their computer. Websites appeared with words like “obsessed” and “erotic” in the title. “My stomach was churning as I clicked on one,” she says. She expected to find pornographic photos. Instead, however, she found stories of raunchy sexual encounters. When Janet confronted Ted, he claimed the links were spam.

Ted’s computer use diminished once he got another job, but increased a year later. Janet found herself going to bed alone again. “My self-esteem took a beating,” she explains. “I just couldn’t understand why he wanted to spend time in front of the computer instead of in bed with me.”

She figured it out one afternoon when she went to send an e-mail. “A photo of a scantily clad woman popped up on the screen as soon as I logged on,” she says. “I thought, ‘How can I compete with this?’ ” When she confronted Ted again, he said he was “sick of living with someone who didn’t trust him.” Their marriage deteriorated and the two are now divorced.

Roxanne Scrudder’s marriage was almost destroyed by a secret relationship. She and her husband, Gregg, a yacht electrician, have been married for 15 years. Until last spring she thought their marriage was solid. “I thought he was my soulmate,” she says.

Roxanne had a difficult year in 2005. Her daughter from a previous marriage was diagnosed with cancer. Roxanne quit her job and spent most of the next eight months in a hospital, leaving Gregg with their two preteen girls. “It was hard being away,” Roxanne recalls. “I called Gregg one night to say I really missed him. And he said, ‘We’ve got plenty of time – we’re going to be together forever.'” Her daughter’s cancer eventually went into remission and Roxanne returned home. Not long after, while she was checking her e-mails on the family computer, a message popped up from classmates.com. “It was a notice that said payment was due for a message my husband had sent to a woman called Sondra,” Roxanne recalls. “I had never heard of her before, so I clicked on the message. It said, ‘Are you still as cute as I remember?’ ” Roxanne felt sick. “I printed the e-mail and presented it to Gregg that evening,” she recalls. “He apologized, admitted it was inappropriate and claimed he never sent it.”

Roxanne wanted to believe Gregg, but the e-mail haunted her. She found herself nervously checking her husband’s cellphone. “My heart was pounding,” she says. “And then I thought, ‘This is crazy! Gregg would never do anything to hurt me or his family.’ ” She put the phone back on his desk, but her paranoia remained. So she figured out the password to Gregg’s business e-mail account. “As soon as I logged on, an e-mail popped up from Sondra,” Roxanne recalls. “She wanted Gregg to meet her for a weekend, and wrote, ‘Even though we’ll have to be satisfied just staring at one another.’ ” Roxanne was shaking as she dialed Gregg at work. “My whole world was bottoming out,” she says. “I said, ‘Who’s Sondra?’ He said, ‘She’s just a friend.'” Roxanne read him the e-mail. “He got defensive and then hung up,” she explains.

Roxanne describes the discovery as a “hot knife” through her belly. Gregg insisted it had only been e-mails. “He told me that her mother was ill, and he was just being supportive,” Roxanne recalls. “That was a slap in the face. I almost lost my own child, and he’s giving her his support? Knowing they were sharing deeply personal information was more painful than if it had been a one-night stand,” she says. “I stayed up at night wondering what was wrong with me that he felt he had to go elsewhere. I also wondered, ‘If he lied to me about her, what other secrets is he keeping from me?’ “

Neuman hears this refrain frequently. “Physical infidelity is overrated,” he explains. “It’s easier for a couple to get over a one-night stand than an emotional affair.” Roxanne is still reeling from the experience. “I kept catching him in lies,” she says. “He said they only talked once a day, but I got his phone records and saw that over a period of 23 days, there were 167 phone calls. That’s an average of seven calls a day.”

Only when Gregg was busted did he finally admit he was wrong. He begged Roxanne for forgiveness, and wrote Sondra a letter saying, “My relationship with you has been the most selfish, damaging and senseless thing over my 15-year marriage. Our refrain from sexual contact made this relationship no less inappropriate, and we both were in denial thinking it did. I love my wife; this is where I want to be.”

But Roxanne has trouble believing him. “It has changed how I look at Gregg and our marriage,” she explains. “I constantly check his e-mails and phone records. It completely destroyed my trust, and without that, what are you left with?” It has also obliterated her self-esteem, which doesn’t surprise Hedva. “Most women prefer emotional contact above all, so if their partner is having emotional contact with someone else, it can feel very threatening,” she says. However, it doesn’t necessarily mean the end of a relationship. “Often a betrayal can lead to better communication,” Hedva insists. “It can point to what went wrong with the relationship in the first place.” Roxanne is hoping she can salvage her marriage through counselling. “I still love him,” she admits. “But I’m not sure I can ever trust him.”

Trust is, of course, the foundation on which healthy marriages are built. Whether it’s the husband or the wife pursuing an extramarital emotional relationship, all experts agree it is a sign a marriage is in trouble and needs help. As Hedva explains, “Whether a man or woman, you have to start by asking yourself, ‘Why did I seek this out? What’s missing in my relationship?’ Then take that conversation to your partner. It’s a lot to ask, but, frankly, working on the relationship is what we commit to when we enter into a marriage.”

Should you get back together with an ex?