What's the key to better sex? Try improving your 'cliteracy'

In her new book, Becoming Cliterate, Dr. Laurie Mintz explains how the 'penetration' model of sex is costing women the pleasure they’re seeking. 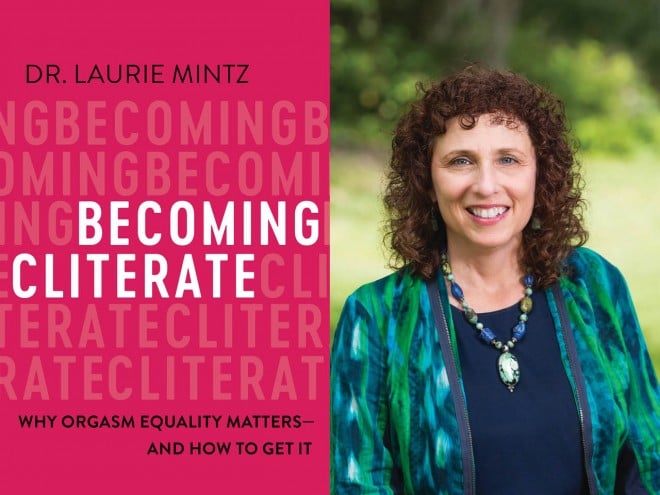 What are the biggest myths our culture perpetuates about sex? How much time do you have?

In her new book, Dr. Laurie Mintz — a human sexuality professor at the University of Florida — tackles what might be the most insidious assumption of the bunch: that intercourse is the best, most reliable way to climax.

“Ha!” she says, over the course of 240 pages in her new book, Becoming Cliterate. In actual fact, more than half of women regularly report having difficulty in achieving orgasm with a male partner. Not only that, but 64 percent of them (compared to 91 percent of men) say they managed to reach climax during their last sexual encounter. What gives? We talked to Mintz about the upsides of queer sex, the downsides of the word “foreplay” and the key to closing the male-female pleasure gap — something she calls “cliteracy.”

What is “orgasm inequality?”

Basically that men are having more orgasms than women, even though orgasms are an equal-opportunity event. It’s just as likely for one gender to have an orgasm as the other, biologically speaking. Orgasm equality means you get what you need to orgasm — no matter what your gender — in a sexual encounter.

Related: 5 lubes that could transform your sex life

Throughout Becoming Cliterate, you hit on the fact that mainstream culture has taught us that sex = penis + vagina, and everything else is just secondary. But the majority of women don’t orgasm from penetrative sex.

Recent research has asked women very clearly, “Can you orgasm from a thrusting penis alone? With no clitoral stimulation?” The result is 15 percent. When I ask my students, “What’s your most reliable route to orgasm?” only four percent say a thrusting penis, alone. That’s really striking to me — that’s what we define as sex.

Once you become aware of that, it’s impossible to read things online without becoming angry — all those articles about the “best sex position.” It’s so engrained in our culture, in sex-ed even, that women and men just don’t question it. Then we have women thinking there’s something wrong with them.

There’s also a very rote, prescribed sequence of what sex is: foreplay, penetration, intercourse, then the man has an orgasm. Not only is that a pretty boring model, it’s pretty damn straight.

I really did try to emphasize that in the book. Women having sex with women aren’t having the same orgasm problems — they’ve figured it out. But our culture doesn’t define what they’re doing as sex, even though they’re doing it a lot better than the heterosexuals, you know? We are in a bad situation: Straight women lose orgasm a lot of the time, or end up faking. Queer people don’t have their sex counted in culture and research. Men lose, too, because they have this unrealistic pressure to give a woman an orgasm by lasting long and thrusting hard. They don’t enjoy sex as much, either; they’re focused on performance.

Also, that term — “foreplay.” It implies that anything before penetration is just a prelude to the real thing.

Yes. The appetizer before the main meal. I feel so strongly about language. The word relates our pleasure to a lead-up to the main event rather than the main event.

So much of sex seems very goal-oriented, like you have to “finish,” or it doesn’t count. How can we better orient ourselves toward pleasure, rather than orgasm?

I am trying to empower women to orgasm, too, but that “I have to, I have to” mentality is going to interfere. The key, I think, to non-goal oriented sex is mindfulness — being immersed in the sensations of the moment and enjoying yourself without thinking, “I have to get there, I have to get my partner there.” Not focusing on the goal is the best way to get the goal, in this case.

I laughed when you referenced the new swell of interest around “orgasmic meditation,” which is basically when a partner rubs your clitoris for 15 minutes. Queer women are like, “Is this news?”

I know! I have a really close friend, who is a lesbian, who read this, and she said, “I can’t help but feel proud! Why hasn’t everyone else figured this out already?” But it’s like, once you put a penis in the mix, we prioritize that, again because of the cultural definition of sex.

Do you think that has to do with power dynamics between the genders?

I do, personally. I think [how we view sex] is a reflection of who’s got power in society. Some people might say, “No, it’s just because that’s the kind of sex that leads to pregnancy!” Procreative sex. That’s part of it, but it doesn’t account for just how disregarded the female orgasm has been.

There’s sort of a new feminist school of thought around orgasm equality — I’m thinking of Amy Schumer’s comment in Glamour, saying, “Have you met my clit?” But aren’t there downsides to everyone demanding to come?

I honestly think in [an ideal situation], we wouldn’t need to be demanding anything. Nobody’s going to benefit if women start demanding and expecting orgasms the way men have. Everybody benefits if we take the view that sex is about the equal giving-and-receiving of pleasure — and that we’re all equally responsible for communicating what we need to get it.

You teach women of undergraduate age. What are the biggest misconceptions they hold about sex?

Oh, there are so many. I feel like my whole class is about busting myths. The two biggest ones are that a) You should have an orgasm from intercourse; and b) You’re a slut for having sex or enjoying it. If we could all be more comfortable talking about sex, and broaden our conception of what it actually is, all the inequity — and all the worries about being abnormal — would dissipate.

And we might actually be able to have an orgasm.