One man's refreshing take on how to achieve epic love

Love from a male perspective: Romance novelist James Russell Lingerfelt on why men are more romantic than you think. 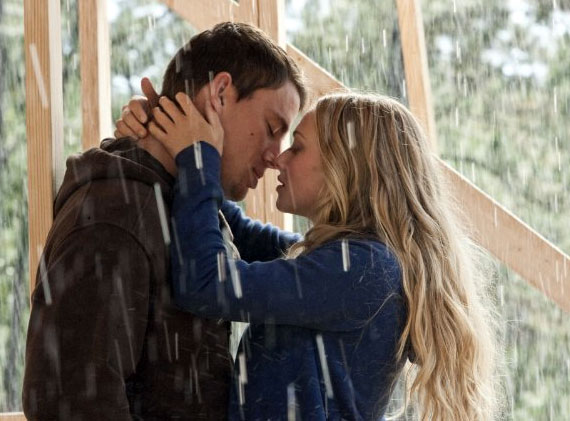 Is it possible to have a love like Channing Tatum and Amanda Seyfried’s characters in Dear John? (Photo courtesy Sony Pictures)

If you’re in love with a man who refers to his gastrointestinal emissions as “kisses for you” you can be forgiven for thinking that the opposite sex is lacking the all-important romance chip.

But maybe you’re not reading your immortal beloved’s actions clearly, because men are romantic and they just express it differently than women — or so says romance novelist James Russell Lingerfelt at least.

Lingerfelt is the author of The Mason Jar, the Notebook-esque love story that’s soon to be a feature film. After writing the novel, Lingerfelt started a blog to share examples of essays and stories on love —  from a male perspective.

We talked to him about what makes men romantic, why we should celebrate (not lament) our differences and how to sustain a romance-novel-worthy connection.

1. Recognize that men are romantic — in their own way
He may not sprinkle rose petals on the bed — truthfully he doesn’t even make the bed — but that doesn’t mean he isn’t romantic. He just “express[es] it differently” says Lingerfelt.

“Men tend to be action figures, expressing romance through actions. You know, storm the castle walls for their love. Slay the dragon. Kill the bad guys.”

If there aren’t any castle walls that need storming or dragons to slay in the neighbourhood, remind yourself that despite his lack of poetic utterings your modern-day hero always gets the garbage out in time for collection and he never forgets to change the oil in your car.

2. Believe that men enjoy love stories
He may cringe at the idea of watching Pretty in Pink with you on a rainy Sunday afternoon but that doesn’t mean he doesn’t appreciate being taken through the emotional journey of a classic love story. Men do enjoy love stories, says Lingerfelt, “but they’re different kinds of love stories.”

Think a war movie isn’t a love story? Think again. Lingerfelt cites the miniseries Band of Brothers as an example of the kinds of love stories that resonant with men. In that series, love is defined variously as the love between soldiers, the love of family and the love of country. The drama Field of Dreams, which focuses on the love between a father and a son, is another example of a film that makes love the central subject. “It might not be romantic love, but it’s love,” says Lingerfelt.

3. Know that he has a soft centre
Bob Dylan famously sang, “She makes love just like a woman…but she breaks just like a little girl.” Your man is equally childlike when it comes to his internal reality.

“I don’t care who the man portrays himself to be,” says Lingerfelt. “You get him with a trusted friend, at a moment when he’s humble and vulnerable, perhaps at the end of the day following a sentimental moment in his life, and you’ll find that he’s just a little boy.”

And grown men and little boys want similar things: “To be loved, respected, to fight for an underdog or a lover in distress, to go on an epic adventure that tests every fibre in his body. That’s what every man wants, in my experience.”

4. Embrace your differences
Don’t expect anyone you love — man, woman, dog or cat (especially dog) — to conform to some ideal. Rather focus on understanding who and what they are. That’s the key to a successful relationship.

“We should observe and listen intently to our loved ones to discover their unique desires, hopes, dreams, fears,” says Lingerfelt.

“It takes years to get to know an individual. No book or blue print will give you the answers to that. No law or formula covers every single circumstance or predicament. You truly want to understand someone? Spend years investing in that person. It’s the only way.”

“Over the past few decades, the various social and economic expectations that kept relationships together have eroded, so now, about the only thing that is left is personal, intentional commitment,” says Lingerfelt.

Rather than lament the fact that he doesn’t remember what you were wearing on your first date, consider how your partner has stuck with you during the dark days and how you can do the same.

“We should meditate on what it means to love unconditionally, even if that takes years.”

What’s one surprising thing your partner has done to show you their love? Tell us in the comment section below.