Signs that your relationship is doomed... 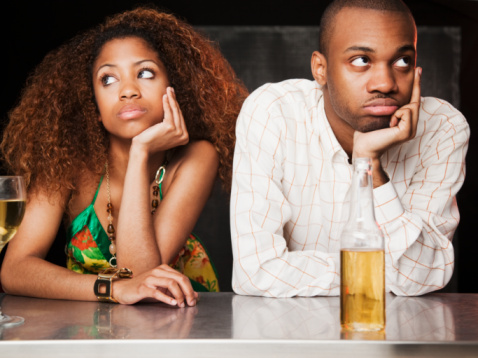 We all know that couple: The one in your circle who breaks up parties with their bickering or wrecks a group lunch with their stony silences. They’re so not going to make it, you mutter to yourself. Maybe. And sure research shows for example that parents of twins and children of divorce are more likely to split up. You might think constant arguing is also a sure sign a couple’s headed for divorce court. “But research shows it’s not conflict that predicts divorce, it’s the failure to reconnect after a fight and to be emotionally responsive to one another,” says Lorrie Brubacher, a Winnipeg-based couples therapist.

So who is on the path to Splitsville? If you recognize your relationship in one of these couples, you may be at risk.

1.   The Shotgun Wedding Couple: Sometimes it’s a pregnancy that sparks a spontaneous decision to marry. But other times, it’s pressure from friends. “Sometimes you see it with a group of friends who are all marrying but one or two in the group aren’t. And then the focus is suddenly on getting married,” says Marilyn Barnicke Belleghem, a couples therapist in Burlington, Ont. “So couples who felt pressured to get married and didn’t take time for pre-marital counselling or exploring their long-range goals to ensure they were compatible could be at risk.”  Derail a divorce: Seem silly to head to pre-marital counselling with your live-in of five years? Even just one session with a qualified registered marriage and family therapist can help ward off potential conflicts down the road by raising issues about who will handle child care once you start a family, whether you’ll merge your bank accounts and other couple-related issues, says Belleghem.

2.    The Separate Lives Couple: Logically enough, couples who share more time together are less likely to divorce. But sometimes it’s not just about how much time you spend apart, but how you are when you’re together. “When people go apart and then come together, those are defining moments,” says Brubacher. “If partners are emotionally responsive during those times it really helps to solidify the relationship. If people are nonchalant, or if one’s clingy and one’s distant, that can have a detrimental affect.” Derail a divorce: Create rituals of connection—the things you do regularly when you leave each other or come back together, suggests Brubacher. They can include the smallest acts such as a kiss goodbye or hug hello, or making time to listen about your partner’s day or week when you finally do see each other face to face.

3.    The Now-We’re-Just-Parents Couple: Oh, it’s easy to get sidetracked when a chubby cheeked infant joins the house. And maybe for the first little while, you can be forgiven. But once you morph into parents only/couple never, you’re headed for trouble. “When parents focus on just their children and not each other as adults and lovers, it can spark the end of a marriage because the desire for a relationship with romance and intimacy looks hopeless,” says Belleghem. Derail a divorce: Make like Tina and Steve, set up a date night and keep it no matter how bone-tired or stressed out you feel from work. Spending regular time together can feed your reconnection as a couple. “So make time for fun where talking about responsibilities and kids is forbidden and flirting and laughing are expected,” says Belleghem.

4.    The Love-Will-Conquer-All Couple: Romantic notion, ain’t it? As it turns out, not always grounded in reality. Take for example a couple where she thinks she may want kids and he doesn’t want children. Ever. “When a difference of opinion about having children becomes acute and the one refusing is determined not to be a parent many marriages end,” says Belleghem. And children aren’t the only deal breaker—religious issues, cultural differences, even political leanings can all have a detrimental affect on coupledom. Derail a divorce: Pre-marital counselling would come in handy. “You have to choose a partner carefully and really get to know their values, likes and dislikes,” says Belleghem. And if you’re already married, lay the issues on the table with the help of a counsellor or mediator to help determine what you can and can’t live with as a person.  “Understand that good deals make good relationships and sticking to the deal or changing it when it stops working well will allow for a lasting relationship,” says Belleghem.

5.    The Never-Talk-It-Out Couple: Having the same fights over and over and never resolving them? Or maybe you’re never actually addressing the issues when you’re in a calmer state. Brubacher says couplehood is about connecting, reconnecting and staying connected. So when you never address an issue directly when you’re calm and collected, then you’re setting up a negative cycle. “Especially in the early years of marriage—if you get stuck in negative, repetitive cycles, it’s a great predictor of divorce,” she says. “If you’re routinely sweeping issues under the carpet, instead of expressing your emotions and connecting, you’re repressing them and become more and more distant.” Derail a divorce: First of all, plan to address the issue in a calmer state rather than a middle-of-the-night blowout. Make notes if you have to on what you’d like to say and more importantly, how you’re feeling about it all. “If you’re not really talking or reaching out to the other one, it doesn’t help,” Burnbach says. “Even if it’s to say ‘I don’t know what I can do? I don’t know how to make things better? But I want to listen to you.’ Take an emotional risk to listen as well as to share.”