Five things never to say to your boyfriend

How to avoid relationship pitfalls by keepings your lips sealed. 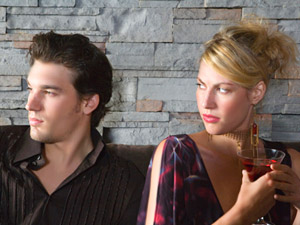 If you’ve ever said something to a guy and been totally shut down, you’re not alone. Whether it was an innocent question or a simple complaint, women everywhere are saying things that spark a blowout fight or an icy brush-off. The reason? Blame biology.

“Physiologically, men respond differently to the feeling of being threatened. Their blood pressure rises, their heartbeat quickens, and they’re more likely to have a fight or flight reaction,” says Joy Tabakman, relationship therapist at the Centre for Imago Therapy in Ottawa. The good news is, the gap between how men and women communicate isn’t as big as most people like to think, Tabakman says. “Men are really evolving in the way they express themselves. But it’s important to remember to take ownership of how you feel about a situation instead of shifting blame. The goal in communication is to elicit compassion and understanding, not defense.”

So before you open your mouth and accidentally wage the next Cold War, read up on the five things that guys hate to hear – and how a little re-wording can make a big difference.

“Your friends are idiots.”

So your boyfriend’s buddies are a bit moronic. If they’re not rehashing last week’s football game, they’re talking about that legendary night at the strip club back in university – again. Try to stop rolling your eyes. “My relationships with my friends have highs and lows, but I don’t like having a girlfriend discount the history we have – even when they can be asses,” says Greg, a 31-year old in a long-term relationship.

A better way to deal with friends you don’t like (or at least not yet) is to try to find some common ground, Tabakman says. Try saying, “I really want to get to know your friends better. Do you think we can figure out a way for that to happen?”

“We never do anything fun anymore.”

Yikes – this one is pretty much the equivalent of saying, “You suck at being in this relationship.” “This comment drives me nuts because when I suggest things to do, my girlfriend is too tired to go out, or our social calendar is filled with friends or family commitments. It makes me feel like I’m the unimaginative, boring person in the relationship, when really it’s more of a joint problem,” says Greg.

While the comment may be true, Tabakman suggests taking ownership of how you feel. “By saying, ‘We never have fun anymore’, you’re putting the responsibility on your partner,” she says. “Instead, you might try saying something like, ‘I miss you. Can we schedule a date night?'”

Another tip: steer clear of words like “never” and “always”. Putting things in absolute terms sounds more threatening and is more likely to trigger a bad reaction, Tabakman says.

“Any kind of fishing around for reassurance about our relationship is really annoying to me,” says Dale, a 30-year-old single guy in Montreal. Not only does this type of statement sound like an ultimatum, but it practically screams “Pay attention to me!” So why not just ask for a little attention?

“Saying something like, ‘I’m really feeling like I need more of your attention’ is a good way to state how you feel without shifting responsibility to your partner,” Tabakman says. “Always begin these types of conversations by stating how you feel first, followed by a plan to work it out together.”

“Your family is pretty dysfunctional, huh?”

This phrase will trigger a strong reaction no matter who you say it to, Tabakman says. “I said this to an ex-boyfriend in the middle of fight because I was trying to tell him that his family’s dysfunction was creeping into our relationship,” says Kim, 36. “But it only made him hurt and angry, and it certainly didn’t help the situation.”

It’s no wonder this comment backfires. “As human beings, we want to know that our partners are going to be primary in helping us nurture our strongest relationships,” Tabakman says. So what’s the right way to tell your guy that his family has issues? Go easy, she advises. “Aim to say things in a way that’s easy for people to digest, especially if it’s something big like this.” That means saying something like, “I know your family is important to you, but I feel like they might be affecting our relationship. Can we talk about this?”

It’s true – you can’t afford the ridiculously large flat-screen TV your husband just brought home. But don’t flip out just yet, Tabakman says. “This kind of reaction is a real buzz kill, especially when you’re excited about something,” says Mike, a 34-year old who’s been married for 6 years. That’s not to say you shouldn’t voice your opinion – just count to ten first.

“Often times we mask our fears and insecurities in anger,” she says. Instead of screaming at your husband for being irresponsible, explain to him why you’re so upset. “You might say, ‘I’m happy that you’re so excited about this TV, but I have some concerns about how we’re going to pay the mortgage this month’,” she says.

Want to improve your relationship? Here are six tips for successful communication with your guy.