Can you turn a frog into a prince? Advice on how a woman can change her man

Rebecca Eckler, author of How to Raise a Boyfriend, answers questions on how to turn a fixer upper into Mr. Charming 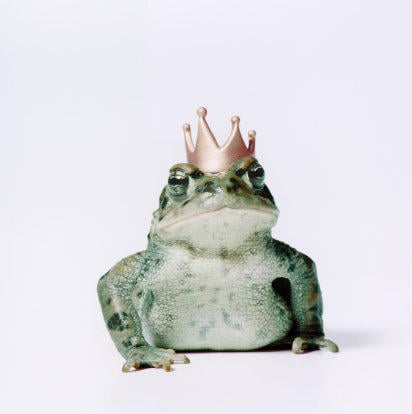 Dating a fixer upper and wondering how much time and energy a man-sized improvement project might take? Rebecca Eckler, author of How to Raise a Boyfriend: The Definitive Manual for Educating Your Man, explains how to “raise” your boyfriend.

Q: Do you really think all men behave like children?

A: I never said they behave like children. In fact, I know a lot of children who behave better than adult males. I’m trying to get across that many men these days need to be “raised” like children. A lot of men don’t know, or have forgotten, the basic manners children are raised with. Like saying please and thank you. Saying ‘I love you’ out of the blue. Not being late. Apologizing sincerely when they are wrong. Answering a basic question when asked. All these things we raise our children to do. But many men have simply forgotten these basic etiquette lessons they learned as children. My exes didn’t behave like children. They just lacked common courtesy and civility that all good mothers hope their children pick up as we raise them.

Q: Can a woman really overhaul her boyfriend’s behaviour? And is it worth the effort?

A: That’s up to the woman. I think it is worth the effort if you are married or been in a relationship for a long time and you have a history together and still love each other and want to make the effort to make each other happy. Are you really going to divorce a guy just because he’s late? Or grunts a greeting to you? Or doesn’t put his dish into the dishwasher? No. But I do believe women can “raise” [men] to change these certain behaviours.

Now, if you just start dating a guy and let’s say he’s constantly late, then maybe it’s not worth your effort to change him, because that’s a character flaw to me, and so early on in a relationship it may be better to cut your losses. But if you are in a serious relationship and the guy is late, is rude, never compliments you, doesn’t even try to do things that he knows will make you happy (a simple email telling you he’s thinking about you, for example?) and you have tried your very best, then it’s up to the woman to decide how much she is willing to “raise” him. I think the line is that you don’t want to be their mother! You want to be their partner, so if you can “raise” them to change certain things, then that’s good!

Q: Can you share some of your best tips when it comes to tweaking male behaviour?

A: Show appreciation when they do something nice for you. A lot of the time women don’t show their appreciation. Let’s say, for example, you get mad because your husband doesn’t return any of your phone calls during the day because he’s busy at work. Tell him that you know he’s busy, but you like hearing his voice. So when he does call, just to say a ‘quick hello’ thank him when he gets home and tell him how happy it made you.

If he doesn’t open doors for you, and you hate this, just stay put (in the restaurant) until he comes back and opens it. It sounds ridiculous, but it works. And it’s cute and funny.

Don’t be annoying and call and text your man all day long.

When you get a compliment, don’t brush it off. Say, “Aww, that’s so sweet of you.” As women, we want the compliments, but sometimes don’t actually hear them.

If you’re meeting your man and he’s in a rotten mood and doesn’t greet you nicely, say, “Oh, I thought I was meeting my boyfriend who loves me.” They’ll get the hint and welcome you differently (and nicely.)

Q: How has treating your boyfriend like a child made for a happier relationship?

A: I don’t treat my boyfriends like children. That’s not the point. I’m not their mother. I simply use techniques that I use to “raise” my daughter. If I do something nice for them, I should get a thank you. I’ve managed to raise my daughter to be a polite, charming, nice, sympathetic human by not treating her like a child, but by raising her to be a person who knows common courtesy and basic manners that will get her far in the real world. That’s what I hope for for men and the men I date. My daughter knows if she doesn’t say ‘please’ she’s not getting her apple juice. So, so simple. She knows not to eat like an animal in front of people. She knows she can’t be late for school. These aren’t just things that are good in a relationship, but for the outside world! Are you going to be late for your boss? Are you going to eat like a pig in front of a potential client? Are you not going to say ‘thank you’ to someone who does something nice for you?

Q: What’s your advice for any woman who’s dating a fixer-upper?

A: Don’t be a naggy bitch. There are ways of raising a man to live up to a basic level of common courtesy and hopefully at a exceptional level. Women are not perfect either. There are clueless guys but women, too, are sometimes clueless in getting what they want out of their guys. We have to remember that both sexes can be clueless. At the end of the day, I believe that women should feel cherished in a relationship (and so should men.) So if you’re not feeling cherished, and you realize the fixer-upper is really hopeless and you can’t raise him, then go out and find someone who is “raised” or who will listen to your wants and needs and make the effort to make you happy.