The average Canadian wedding costs around $20,000. Find out how people feel about what they spent after the big day and where they wish they'd saved. 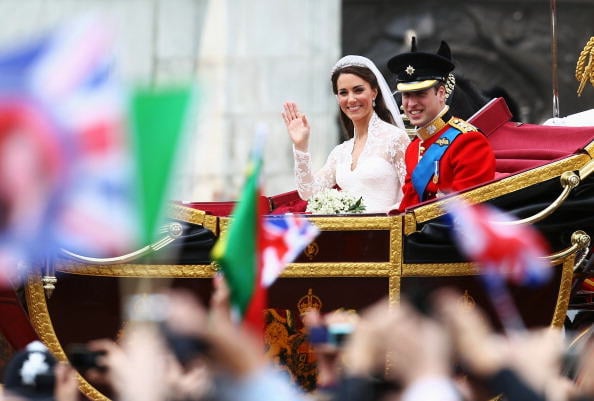 The Royal Wedding has been estimated to have cost more than $50 million (Photo by Getty Images).

Once sacred rites of passage witnessed by a community, weddings have become the adult equivalent of prom night. Which is to say that all people worry about is the dress and the deejay — two factors that are rendered entirely irrelevant the morning after.

But wedding fever isn’t surprising given the number of outlets that use the event as an opportunity to sell indispensable items such as garters, cummerbunds and cake toppers. An entire industry has grown up around the moment in which two amiable individuals become one, easily irritated entity. There are magazines, websites and TV shows devoted to the occasion. But the industry may have outpaced the consumer as more and more people cite cost as an impediment to tying the knot.

But consumers are beginning to think twice about the Cinderella fantasy and are leading a wedding revolution of sorts.

Don’t waste money on a wedding, proclaims a recent headline on CNN.com. The article features a number of real-life brides who now regret spending too much on their special day. Their biggest spending regret also happens to be the very item that gets the most attention. That item? The wedding dress.

Reality TV shows such as Say Yes to the Dress may make it seem as if spending $5,000 on a wedding dress is not just essential but normal, but many brides appear to be questioning that logic and are starting to see greater value in buying a dress secondhand, or even renting one.

My wedding dress was under $100. To the average person this sounds like an unbelievable deal, and it was. But I have to confess that that was about $99 more than I could afford at the time.

There are upsides and downsides to going the thrifty route with the wedding dress, though. I don’t imagine I’ll be handing my dress down to my daughter one day. But then again, I don’t have a daughter, so maybe I’m being silly.

The dress isn’t the only item that brides can trim from their wedding budget. The CNN article lists several other traditional expenses that can be nixed to keep costs low. Those expendables include the wedding cake, wedding favours, printed menus and programs.

I would add that the bridesmaid dresses and groomsmen tuxes could be done away with by keeping the wedding party limited to the bride and groom. This trimming of the fat has another benefit: it cuts down on the number of unendurable speeches during the reception. Unlike the wedding cake, that is an absence your guests won’t lament. In fact, they may even thank you for it.

Click here for the ultimate love and marriage money guide. Tell us in the comment section below what you regret spending money on for your big day.