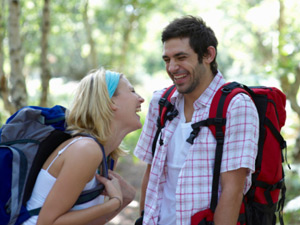 Psychologist Adrian White from the University of Leicester looked at more than 100 studies that tracked self-reported happiness around the world. Canada ranked 10th, behind nations like Denmark, Switzerland and Austria, while the United States lagged far behind in 23rd place. If we want to move up in the ranks, it’s time to focus on things that are proven to positively impact on how we feel.

1. Focus on the present
One thing we know from positive psychology is that we may be chasing the wrong things in the quest to feel better. “We’re really bad at predicting what makes us happy,” says Denise Clegg from the University of Pennsylvania (the world’s first school to offer a master’s program in positive psychology). “We get caught up in future thinking and how things will be ideal once our conditions are met.” That could be when you lose 20 pounds, land the perfect job or can afford a real Louis Vuitton bag. “People over-estimate the ability that material goods have to make us happy. But the feeling you get from them is temporary and fleeting,” she says. The happiest among us already have this figured out. They don’t exist in a world of “if only” or “when I finally accomplish X, I will be more satisfied.”
Author and lecturer Tal Ben-Shahar cautions against the trap of living in the future. “In most cases, shortly after reaching some destination, we return to our base level of well-being,” he wrote in his book Happier: Learn the Secrets to Daily Joy and Lasting Fulfillment. “Rather than allowing ourselves to remain enslaved by our pasts or futures, we must learn to make the most of what is presently in front of us and all around us,” he says, noting that a happier life is shaped “experience by experience, moment by moment” — and not by single events. That doesn’t mean we shouldn’t have goals. According to Ben-Shahar, “The primary objective of goals is to liberate you to enjoy the here and now, the journey.” Ben-Shahar talks about “self-concordant goals,” ones that are true to who you are and don’t rely on extrinsic factors — like trying to please your parents by becoming a doctor. He suggests setting long-term goals with timelines, then planning daily and weekly activities to help you get there.

2. Put happiness on the agenda
“We need to have those times when we think about what it means to be happy,” says Ian Smith, a physician who writes and reports widely on health issues. Most of us operate at the speed of light, so it’s easy to forget to check in with ourselves about our own happiness. The good news is you can grab the wheel and steer yourself in the right direction by building your personal roster of happiness-promoting actions (things science types call intentional activities). If you’re not sure what these things are for you, take a second and think about the things that you know make you feel good. Examples might be exercising, having a glass of wine with a friend, seeing a concert, playing with your kids or hosting a dinner party. Now write down as many as you can. This is your list of happiness triggers, and the trick is to regularly schedule a variety of them into your calendar.

3. Trust your neighbours
If you lived on Wisteria Lane surrounded by desperate housewives, you might have good reason not to trust your neighbours. But otherwise, it increases our well-being to believe that people in general are much more honest and trustworthy than we may currently think, says John Helliwell from the University of British Columbia. “Going through life thinking that the world is a dangerous place and that people are evil is detrimental. This fear reduces our willingness to make social connections. We lose opportunities to connect.”
Evidence suggests that most people are inherently good, even when they don’t trust others to be. A global poll asked participants about the likelihood of having their lost wallet with cash, photos and identification returned. Fewer than 25 percent of Torontonians thought they’d see it again. Maybe it’s from watching too many episodes of CSI, but we expect bad things to happen. But when the Toronto Star did an experiment last year in which 20 wallets were left around the city, the return rate was 80 percent. Another global study tracked fear of robbery across 30 countries: 29 percent of respondents said they thought it was likely they would be burglarized in the next year. The actual probability was 3.5 percent (including attempted robberies). Despite what we think, the lesson here is that the world is generally a good place and it’s in our best interests to act as if we truly believe that.
Since trust and social connections are so closely related, Helliwell suggests putting shyness aside in social situations. “At least as an experiment, talk to people in elevators and buses, and provide that extra bit of consideration, eye contact, a smile and a wave, when sharing public spaces.” Helliwell tried the experiment in his own life, complimenting new neighbours on their garden. This simple gesture, he explains, extends the sort of friendly connections that put neighbours at ease and make them more trusting of one another.

4. Reframe and take stock
When setbacks happen, happy people see them as temporary blips from which they will bounce back. Even if you’re not predisposed to this glass-is-half-full outlook, you can train your brain to fight negative thoughts. As Smith explains, “When something bad happens, look for the silver lining and believe things can get better.” As with any kind of training, practice makes perfect, so the next time a rainy day threatens to spoil your afternoon in the park, actively choose to reframe your thinking. Instead of being disappointed, view the detour as an opportunity to pamper yourself with a long bath or re-watch episodes of Glee.
Another happy-person way to cultivate optimism is to keep a gratitude journal. To get going, start by writing down three to five things that went well each day and why, suggests Smith. Gradually you will find you have more to write about because focusing on good things puts the brakes on poor-me-with-a-sad-empty-life thinking. But that’s not all: Becoming more optimistic also means you’ll be physically and emotionally healthier, more productive at work, and you’ll even — according to a study by the Mayo Clinic — live longer.

5. Make close friends a priority
Barbra Streisand got it right when she sang: “People who need people are the luckiest people in the world.” When Martin Seligman and his colleague Ed Diener studied the lives of the very happy, they found these people enjoy rich fulfilling social lives, have more close friends and spend less time alone than unhappy people. Other recent research suggests that meaningful connections with close friends and family matter most on the happiness scale. A few close relationships are also more satisfying than a myriad of “how’s the weather?” relationships or virtual friends. Seventy-seven percent of participants in a survey of 16 countries, conducted by Coca-Cola, said that real-world contact was a greater source of joy than the virtual kind. It helps too if those relationships are with happy people. For each happy friend you have, the probability of being happy yourself jumps by 9 percent, says a study in the British Medical Journal.
If you feel you lack close friends, steal a page from the extrovert’s book to create a more substantial social life, suggests research from Washington University in St. Louis, Missouri. The study found extroverts tend to be happier than people who had a neurotic, negative attitude about others. Try it yourself by committing to spending more time with people: Sign up for a salsa class, or host a movie night for friends.

6. Give to get
You don’t have to devote your life to working with the less fortunate in India (though that’s very good, too) to feel good. Small gestures, like giving flowers or donating a couple of hours of your time to the local library, create what some call a “helper’s high,” a feel-good buzz that has lasting effects. A University of California research team studied people who performed various acts of kindness over a 10-week period and found participants reported significantly higher levels of happiness, even one month after the study. Being good to others can also boost your sense of self-worth, and it helps create stronger connections with people. And as Seligman put it in one 2008 lecture, positive psychology is not happy-ology. It’s focused on not just pleasure, but true meaningfulness. Contributing to the greater good and giving of yourself adds that layer of importance to life.

7. Tap into the power of “no”
“We are, generally, too busy, trying to squeeze more and more activities into less and less time. Consequently, we fail to savour potential sources of happiness that may be all around us,” says Ben-Shahar. To remedy the situation, he suggests turning down some opportunities, even when they may seem enticing. “We often say ‘yes’ to others, thereby saying ‘no’ to ourselves,” says Ben-Shahar. “We need to simplify our lives, and one of the ways to do it is to be less consumed by technology,” he says. “It’s okay not to check emails for a couple hours at a time; it’s okay not to have our phones on 24 hours a day, seven days a week.”
He also recommends settling for “good enough” rather than “perfect.” When you revise your expectations of yourself, you may find a “good-enough” approach provides relief, and that you will feel more energetic and focused. That was Ben-Shahar’s experience – one that led him to explore the topic further in his 2009 book, The Pursuit of Perfect: How to Stop Chasing Perfection and Start Living a Richer, Happier Life.
For Ben-Shahar it’s not just about what we do but also how much we do: “We can be doing all the right things that would normally make us happy, but if we have too many of those right things, we will pay a price.” He gives the example of listening to two of your favourite songs, first one, then the other. What if you played them both at the same time? You wouldn’t be able to truly appreciate or hear either one. “This is modern life. So many people ask me, ‘Why aren’t I happy? I have so many things going for me — family, friends, work.’ The answer is the exact same reason that you don’t enjoy listening to those two pieces of music simultaneously. There can be too much of a good thing, and when it comes to happiness, less is often more.”